Astec Cellulose DMP is complementary to the other Astec CSPs, including CHIROBIOTIC®, CYCLOBOND™, and the P-CAP™ product lines, and a must-have for every chiral HPLC or SFC screening protocol. 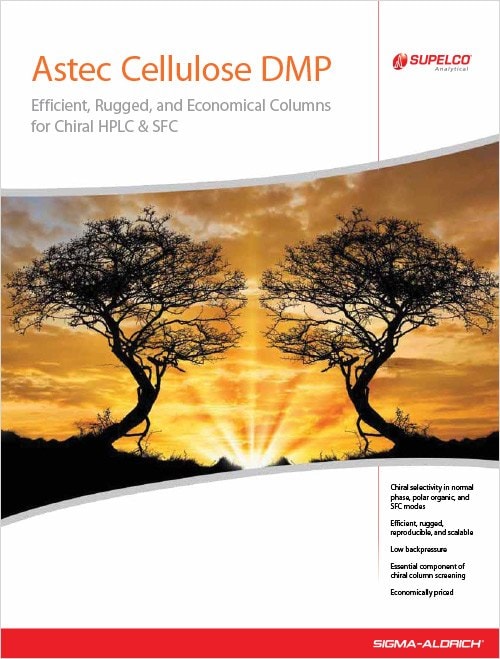 The polysaccharide cellulose is a naturally occurring, optically active, linear polymer comprising hundreds to thousands of D-(+)-glucose units joined by ß1,4-glycosidic bonds. The long polysaccharide chains form rope-like bundles held together via multiple hydrogen bonds between proximate hydroxyl groups. In 1973, Hesse and Hagel described the enantioselective properties of microcrystalline cellulose triacetate.1 In the mid-1980’s, Okamoto and colleagues published their work that lead to the use of derivatized cellulose adsorbed onto silica as chiral HPLC stationary phases.2,3 Since then, the polysaccharides, particularly cellulose and amylose, have become the most commercially successful class of CSPs.

How do Cellulose-Based CSPs Separate Enantiomers?

Derivatized cellulose-based CSPs, like Astec Cellulose DMP, owe their high enantioselectivity to the large number of chiral centers in the polysaccharide backbone and to its highly-ordered structure. The shape of the pockets formed by the intertwined chains provides chiral discrimination based on molecular shape.
Derivatives at the 2, 3, and 6-position hydroxyls confer additional enantioselectivity. The dimethylphenyl carbamate derivative (Figure 1) separates a wide range of enantiomers; the phenyl ring and carbamate groups provide p-p and hydrogen bonding interactions, respectively, with predisposed analytes.

Astec Cellulose DMP is unique in offering classic DMPC-cellulose chiral selectivity, but at approximately one-half the cost of most DMPC-cellulose columns. It is an ideal component of any chiral column screening portfolio, and should be investigated as an alternative to higher-priced DMPC-cellulose columns for existing methods. The cost savings are especially dramatic when comparing preparative column dimensions.

Comparable to Other DMPC-Cellulose Columns 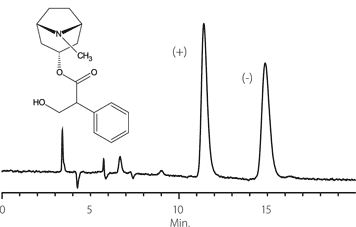 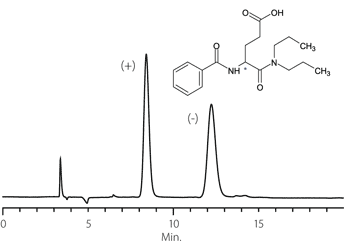 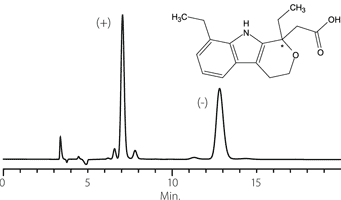 Polar organic mode (POM) mobile phases comprise acetonitrile and/or methanol, often with acids, bases, or salts added to control peak shape and retention of certain sensitive analytes. The benefit of POM is realized when dealing with compounds that are poorly soluble in non-polar normal phase mobile phases. For preparative chiral applications, solubility is especially important; analyte concentration per injection influences the throughput. Astec Cellulose DMP operates in POM to permit choice of mobile phase based on analyte solubility. A few of the racemates resolved on Astec Cellulose DMP with different POM mobile phases appear in Table 2 and Figures 13-15. Not only does Astec Cellulose DMP provide excellent resolution in POM and NP modes, it also is rugged enough to hold up to repeated NP-POM-NP-POM cycles without loss of performance. Figure 16 demonstrates the same Astec Cellulose DMP column used alternately in normal phase and POM mobile phases. Performance values appear in the figure. 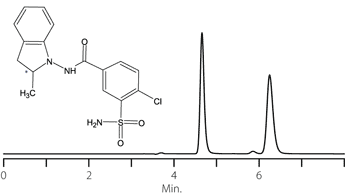 SFC (supercritical fluid chromatography) is gaining in popularity, especially for chiral separations, due to its speed advantages over HPLC. The CO2 is readily removed from the eluate, which makes it ideal for prep. DMPC-derivatized cellulose is widely used for chiral separations by SFC, both analytical and prep. The Astec Cellulose DMP works well in SFC mode, providing rapid separations with excellent selectivity. For example, Figure 17 shows the SFC separation of a mixture of six diastereomers of a single compound in less than four minutes on Astec Cellulose DMP. As a testament to its utility as a screening tool, the durability of Astec Cellulose DMP permits rapid (ballistic) gradients of methanol, ethanol or IPA in CO2 with long column lifetime and low backpressure, but without significant column bleed (Figure 18).

A characteristic of the polysaccharide-based CSPs that has contributed to their popularity is their utility for preparative applications. Although there are many factors to consider in a preparative scale up, the particle contribution comes primarily from the amount of available stationary phase and to what degree it resolves the enantiomers. When we designed the Astec Cellulose DMP, we sought to achieve the high sample loading and throughput that chiral chromatographers have come to expect. The sample loading (mg per injection) of Astec Cellulose DMP is comparable to Competitor D (Figure 19). An example of the scale-up of an analytical separation (4.6 mm I.D. column) to a preparative scale (21.2 mm I.D.) is shown in Figure 20 for the anti-Alzheimer's drug BAY 73-6691.

Complementary to the Other Astec CSPs

Cellulose DMP is the latest addition to the Astec line of high-quality chiral stationary phases manufactured by Sigma-Aldrich. Other Astec HPLC CSPs include CHIROBIOTIC, CYCLOBOND, P-CAP, P-CAP-DP, CLC-L, and CLC-D. Astec CHIRALDEX and Supelco DEX are the market leaders for chiral GC separations. The HPLC CSPs are complementary to each other in terms of selectivity and mobile phase compatibility. This means:

The wide choice of CSPs in the Astec line means they cover many different areas of interest within chiral chromatography. Some of these areas are captured in Table 3. View the complete product listing of Astec Cellulose DMP columns.

Table 3. Techniques, Applications, and Fields of Use for Astec Chiral Phases
Materials
Loading