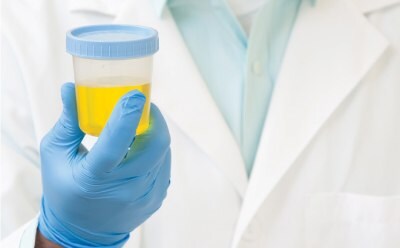 Supel™ Swift HLB SPE is a new, proprietary, and patent pending copolymer having both hydrophilic and lipophilic functional groups. It is intended for use as a sorbent material in solid phase extractions (SPE) prior to instrumental analysis, such as LC-MS/ MS. The dual polarity of Supel™ Swift HLB makes it ideal for extracting a broad range of compounds from aqueous matrices and is appropriate for samples in food & environmental applications as well as biological samples such as urine, serum, and plasma. The hydrophilic and lipophilic balanced (HLB) property of the polymer material enables the retention of a broad spectrum of compounds having a wide range of polarities and log P values (-0.9 - to 4.7).

In this study, we demonstrate the cleanup of urine samples by HLB solid phase extraction for the analysis of opioids via LC-MS/ MS. The 96-well SPE format (Figure 1) utilized is optimal for clinical and other laboratories working in a high-throughput environment. 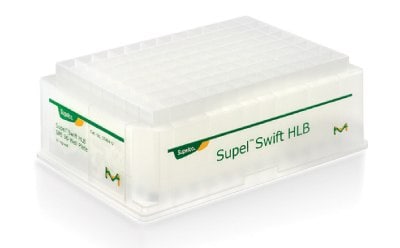 During the analysis of drugs of abuse in urine, the drug and their metabolites (e.g. morphine) can be present glucuronide form (Figure 2). In these cases, hydrolysis using a β-glucuronidase enzyme is performed prior to LC-MS analysis of the samples to ensure that the free form of the drug can be analyzed in the samples under investigation. Subsequently, the samples require a cleanup prior to injection into the LC-MS instrument. Solid phase extraction remains the most convenient method for use in such sample cleanups.

Synthetic urine, SigMatrix Urine Diluent, was spiked with “Pain Management Multi-Component Opiate Mixture-13 solution” diluted to 100 ng/mL for 12 of the 13 compounds and at 10 ng/mL for fentanyl. A list of the components and the transitions monitored is available in Table 1. The following internal standards were added at 10 ng/mL: oxycodone-D3, (±)-methadone-D9, oxymorphone-D3, hydrocodone-D3, cis-tramadol-13C, D3, meperidine-D4. The MS transitions monitored with these internal standards are shown in Table 2.

A β-glucuronidase solution at a concentration of 10 kU/g was prepared in 0.1 M phosphate buffer (pH 6). The bulk sample solution comprised of 3:1:1 SigMatrix urine diluent:β-glucuronidase (10 kU, pH 6.0):phosphate buffer (pH 6.0). The samples underwent digestion for 2 hours at 60 oC with mixing at 200 rpm. The hydrolysis conditions used were previously found to be optimum for using β-glucuronidase enzyme from limpets. The samples were cooled, and the sample solutions adjusted to pH 9 with an ammonium hydroxide solution. The samples were then processed on a Supel™ Swift HLB 96-well plate containing 30 mg/well of HLB sorbent as outlined in Figure 3. After sample processing, 75 µL of cleaned sample was diluted with 175 µL of LC/MS grade water to decrease the final organic component to 30%. Samples were analyzed on a Sciex 3200 QTrap MS instrument with an Agilent 1290 LC (separation parameters are shown in Table 3). Analytes were quantified by a 5-point external calibration curve using standards prepared daily from methanol stock solutions stored in glass vials. Injected calibrator solutions contained 10 ng/mL of the previously outlined internal standards in 70:30 methanol:water.

A representative chromatogram of an SPE cleaned- up sample spiked at 100 ng/mL (except for fentanyl at 10 ng/mL) is shown in Figure 4. Overall, 12 of the 13 analytes showed relative recoveries of 73 to 105% (n=96) with an overall recovery of 88% as shown in Table 4 and Figure 5. The lower recovery for buprenorphine is attributed to a log P ~5, which would have led to non-specific binding.

For the thirteen analytes, the RSDs associated with the recoveries were <7.2% (n=96) showing consistency across the plate. Absolute recoveries are shown in Figure 6.

Figure 4.Representative chromatogram of the spiked urine-mimic samples after cleanup with SPE.

The impact of matrix components was calculated by comparing the signal response of the analyte in 70:30 methanol:water (representing 100%) to a sample that was cleaned using the SPE procedure outlined and was post-spiked (final extracted samples had 30% methanol present). Across the 13 analytes, minimal to no matrix effects (suppression or enhancement) ±10% was observed for most of the analytes as shown in Figure 7. Two analytes that were suppressed the most were naloxone (-30%) and naltrexone (-20%). These suppression values would have lead to the lower absolute recovery reported in Figure 6 but were corrected for in relative recovery by use of an internal standard (Figure 5). Supel™ Swift HLB SPE is a hydrophilic and lipophilic polymer SPE phase designed for the extraction of a broad range of compounds from complex aqueous sample matrices. In this study, we demonstrated the utility of this SPE phase to prepare urine samples for the analysis of a series of pain management drugs readily available as a premade mixture. No post- extraction concentration or dry down of samples was required. The relative recoveries of the analytes were in the range of 73-105% with one exception of buprenorphine. The reproducibility across the entire plate was excellent with ≤7.2% RSD. Minimum matrix effects (±10%) were observed after Supel™ Swift HLB SPE cleanup. The developed SPE method can be applied to analyze a wider range of analytes in urine.

More information on clinical testing is available at SigmaAldrich.com/clinical