The use of mass spectrometry (MS) as an analytical technique allows quick screening, identification, and confirmation of contaminants. In spite of advances that MS instrumentation brings to achieve ever more sensitivity and specificity, sample preparation and cleanup still remain an important part of the analytical workflow. In recent years, adaptation of QuEChERS methods for sample preparation has been successful as it reduces time without sacrificing sample cleanup, and is very compatible with LC/MS analysis. QuEChERS methodology, while originally used for pesticide residue testing of fruits and vegetables, has been applied to other foods such as breads, milk, and oils. In addition, the range of analyzed compounds has been broadened from pesticides to other types of contaminants (e.g., veterinary drugs).

The SPE phases that were originally used in standard QuEChERS methods included primary secondary amine (PSA) for the removal of acids, polar pigments, and sugars; graphitized carbon black (GCB) for the removal of color pigments such as chlorophyll; and silica-bonded C18 for the removal of lipid and non-polar components. Silica-bonded C18 was, until recently, the only sorbent available for the removal of fats and non-polar compounds from samples. As an addition to C18 for fat removal, zirconia-bonded sorbents (Z-Sep and Z-Sep+) have recently been successfully used for cleanup during QuEChERS in the analysis of pesticides, and have also proved to work well for analysis of environmental contaminants. This work evaluated the use of the C18 and Z-Sep+ sorbents for cleanup of an animal-derived food sample (cow’s milk) prior to the LC/MS/MS analysis of veterinary drugs

An Ascentis® Express column with Fused-Core® particle architecture was used to achieve faster separations while using a standard Agilent 1200 HPLC system. Two different column stationary phases, C18 and Reversed Phase Amide (RPA), were tested for this separation. The RPA HPLC column was chosen because it provided better retention for more polar analytes, such as salbutamol and sulfanilamide (Figure 1). Matrix effects were evaluated by spiking the blank extracts with analytes and comparing the obtained recovery values to the calibration curves in solvent. Solvent standards were used for all quantitation. 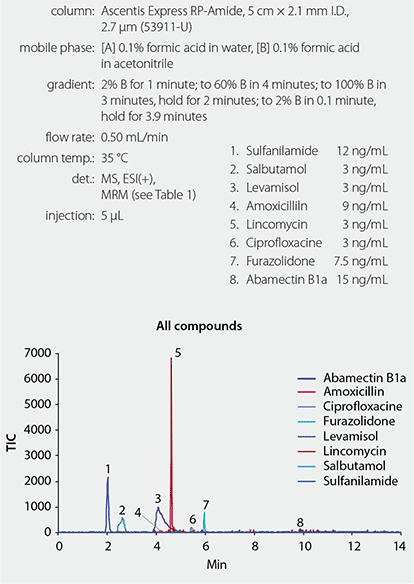 Development of the sample extraction procedure was based on available published literature for veterinary drug analysis.1-8 First, the “true” QuEChERS extraction into 100% acetonitrile and the salt-out protocol was tested. It was quickly determined that polar drugs, such as salbutamol and levamisol, did not extract well into pure acetonitrile. Therefore, as a compromise, 20% water was included in the final extraction solvent, and no extraction salts were used for the final procedure.

Addition of 1% formic acid to the extract prior to Z-Sep+ cleanup was necessary to improve the recoveries for compounds that had chelating properties. This additive was not necessary when C18 cleanup was used.

The removal of phospholipids, in particular, phosphatidylcholine, (PC) from milk samples was evaluated and was found to be more complete using Z-Sep+ in comparison to that using C18. The PC chromatogram in cleaned milk samples is shown in Figure 2. 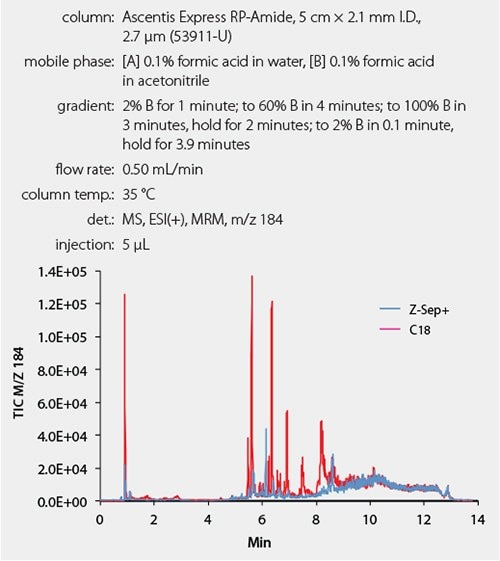 The C18 sorbent performed well for spiked milk samples. The cleanup using C18 gave good recoveries for most tested compounds, except for abamectin. As mentioned earlier, abamectin is a late-eluting compound and its signal is subject to ion suppression under the C18 cleanup conditions. This is probably due to the presence of phospholipids that were incompletely removed during sample cleanup. The detection of abamectin was significantly better using Z-Sep+ sorbent, as in this case, cleaner samples were obtained. The use of Z-Sep+, however, was not favorable to the detection of ciprofloxacine, due to retention of that compound through chelation and to the detection of lincomycin and salbutamol, whose signals were lower due to ion suppression in the samples. Geis-Asteggiante et al. also compared multiple sorbents for use in multi-class veterinary drug analysis. They observed that Z-Sep provided the best sample cleanup, yet, C18 was their choice sorbent for analysis of animal tissue samples. It was observed that some of the analytes (floxacines and tetracyclines) chelated to the Z-Sep sorbents, and were, thus, retained, causing low recovery.1

Analysis of milk for veterinary drugs was performed, and two sorbents were evaluated for cleanup. For multi-class veterinary drug methods, the C18 sorbent provided better recoveries for the majority of compound classes in comparison to Z-Sep+ sorbent. On the contrary, Z-Sep+ sorbent afforded better sample cleanup and more effective removal of phospholipids. Cleanup with Z-Sep+ required the addition of formic acid to the extract to prevent retention of compounds containing acidic and chelating groups. The Z-Sep sorbents can be selectively used when analysis of individual classes of drugs is required, for example, their use is more beneficial for analysis of chloramphenicol and avermectins. The use of an HPLC column with the RP-Amide water-compatible stationary phase resulted in better retention of more polar analytes and improved peak shapes across all nine compounds of interest while using MS-compatible mobile phases.