MIPs are highly cross-linked, polymer-based, molecular recognition elements, which are capable of binding one target, one compound, or a class of structurally related target compounds, with high selectivity. The selectivity is introduced during MIP synthesis, in which a template molecule designed to mimic the analyte guides the formation of specific cavities, or imprints, that are sterically and chemically complementary to the target analytes.

Most of NSAID compounds have acidic functionality. The following subgroups can be recognized among NSAIDs and they include arylpropionic acid derivatives (Carprofen, Vedaprofen), oxicam derivatives (Meloxicam), nicotinic acid derivatives (Flunixin), and anthranilic acid derivatives (Diclofenac, Tolfenamic acid). Acidic NSAIDs are characterized by their ability to suppress the inflammatory process and associated symptoms such as pain, swelling, redness, and loss of function.

NSAIDs are widely used in veterinary medicine in the treatment of food-producing animals. Although they have short half-lives, these veterinary drugs and their metabolites may leave residues in edible tissue, which could have direct toxic effects on the consumers. In order to avoid risks, a strict legislative framework controls the use of these drugs, with the aim of minimizing the risk to human health. The European Union (EU) constituted maximum residue limits (MRLs) for numerous substances, which are administered for food-producing animals (Council Regulation No. 37/2010), to ensure human food safety.1 The acidic NSAIDs are a group of substances, for which maximum residue limits (MRL) have been set. The tolerance value in poultry muscle tissue (the national agreed value for these specific matrixes) for all NSAIDs analytes in the present work is 50 μg/kg.

The method presented here was sensitive and selective enough to detect these compounds below the tolerance level. The described method was fully validated according to the European Commission Decision 2002/657/EC2-4 for the analysis of veterinary drug residues.

The extraction procedure was adopted from R.J.B. Peters et al.5 Five grams of muscle tissue were weighed into 25 mL centrifuge tubes; internal standards and analytes were added to the samples. Four mL ammonium acetate buffer (10 mM, pH 5) and 6 mL acetonitrile were added. The mixture was shaken well by hand for 30 seconds, followed by a pH adjustment between pH value 4 and 5 with formic acid. The sample was shaken for 20 min, and then centrifuged for 5 min (3000 g at 20°C) to separate the phases.

10 mL of the supernatant were decanted into a clean, 50 mL centrifuge tube and diluted with 5 mL of 10 mM ammonium acetate buffer. The pH value of the samples (pH 3) was checked before proceeding to the solid phase extraction stage.6

The next step was the solid phase extraction (SPE) with SupelMIP®. All of the wash and elution steps were done according to the SupelMIP extraction protocol for NSAIDs. The SPE method is presented in Table 1.

The eluate was evaporated to dryness under nitrogen at 50 °C and reconstituted in 150 μL acetonitrile: methanol (9:1 v/v) with 0.1% formic acid. The extracts were filtered through a 0.2 μm filter and transferred into HPLC vials. The LC-MS conditions are presented in Figure 1.

We looked for a sample preparation method that would allow low NSAIDs detection limits, and provide easy cleanup from poultry muscle tissue. The first liquid-liquid extraction step was using acetonitrile: water efficiently precipitated the proteins. If that extraction step is not performed, the samples could have formed a gel-like consistency in the presence of water, and would have been hard to handle. Experiments were also carried out to compare the efficiency of protein separation by liquid-liquid extraction with that by hydrolysis using protease. The use of protease resulted in a loss of analyte, which was probably due to less efficient protein removal. 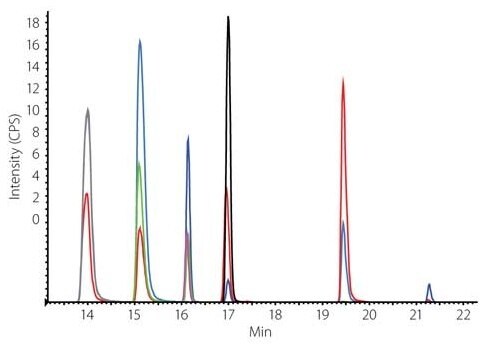 During method validation the sample preparation procedures were applied to 16 poultry muscle samples. The samples were spiked at the following concentration levels:

Quantification was done by using standard matrix-matched calibration curves. On the basis of these results, we calculated decision limit CCα, detection capability CCβ, and recovery as well as the within-laboratory reproducibility. Table 2 shows the calculated validation results for poultry muscle.

In this article we described a new, successfully developed and validated, LC-MS-MS method allowing the extraction of NSAIDs from poultry muscle tissue using MIP SPE. SupelMIP offered the selectivity necessary to achieve sensitivity; detection limits and quantitation in tissue at the low concentration level that was below the maximum residue limits. Furthermore, cleaner extracts were obtained with this rapid extraction technique when analyzing difficult and dirty sample matrices. Running cleaner samples resulted in less contamination to LC-MS instrument, and less maintenance was required. The ruggedness of the SupelMIP SPE was proven by a systematic variation of the validation factors on two levels. Thus, the extraction method is fit for purpose and can be applied in routine analysis.