As of January 2015, 23 states and the District of Columbia of the United States (US), as well as Canada and various European countries, have passed laws allowing cannabis to be used for medical applications. Cannabis quality control testing is mandated in many jurisdictions. Due to unique morphological characteristics, medical Cannabis plants are more susceptible to fungal contamination than Cannabis plants grown for non-medical use.1 The presence of fungi on Cannabis can result in the production of toxic, secondary fungal metabolites known as mycotoxins. These toxins, even in minute amounts at the ppb level, can pose a serious threat to immunocompromised patients.

Dried cannabis sample was obtained courtesy of Dr. Hari H. Singh, Program Director at the Chemistry & Physiological Systems Research Branch of the National Institute on Drug Abuse at the National Institute of Health. The exact variety of the sample was not known. A mass of 0.5 g of finely ground cannabis was weighted into a 50 mL centrifuge tube. A volume of 10 mL of the extraction solvent, acetonitrile:water (86:14), was added to the tube. The suspension was mixed on a shaker for 30 minutes. The tube was centrifuged at 3000 rpm for 5 minutes. An aliquot (2 mL) of the supernatant was transferred to a different tube and spiked with the mixture of aflatoxins (Table 1). The resulting solution was then passed through a Supel Tox AflaZea SPE cartridge under vacuum. A 200 μL portion of the collected cleaned sample was diluted with 800 μL of water and injected into LC/MS/MS for analysis. Filtration was not necessary at this stage, as no precipitate was formed upon dilution with water. Figure 1 depicts the cannabis samples before, during, and after cleanup. Figure 1.Photos of the Cannabis Samples (A) Before Cleanup, (B) on Supel Tox AflaZea SPE Cartridge, and (C) After Cleanup

This aflatoxin study was performed on an Ascentis® Express Phenyl-Hexyl HPLC column (Figure 2). In a previous study, the phenyl-hexyl stationary phase produced increased retention of aflatoxin compounds while improving the separation of aflatoxins from co-extracted corn matrix.3

Cannabis matrix effects were determined by comparison of the calibration curves constructed in solvent versus those in extract (Figure 3). Significant ion suppression was observed in the cannabis samples, thus the matrix-matched calibration curves were required for accurate quantitation. While the AflaZea cartridge provided some cleanup of the sample extract, due to the complex composition of the cannabis, there were still components remaining that affected ionization efficiency in the MS system. Analyte recovery values from spiked cannabis extracts ranged from 102 to 127% with RSD below 12% for 3 replicates (Table 3). Excellent recovery values were even observed for Aflatoxins B2 and G2 which were spiked at a low level of 6.1 ppb. 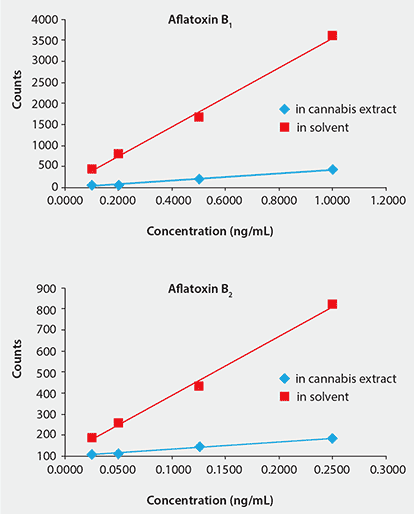 Figure 3.Comparison of Matrix-matched and Solvent Calibration Curves for Aflatoxins B1 and B2

A sample preparation method utilizing Supel Tox AflaZea SPE cartridges was developed for the cleanup of cannabis extracts prior to HPLC analysis of aflatoxins. The AflaZea SPE cartridge, used according to the standard methodology, contributed to a simple, economical, and quick analysis. This SPE methodology in combination with LC/MS/MS detection and the selectivity of the Ascentis Express Phenyl-Hexyl HPLC column allowed for sensitive detection of four aflatoxin compounds in cannabis with recoveries of 102-127% at 6-25 ppb levels. Therefore, this current analytical method utilizing SPE, UHPLC, and MS/MS detection can successfully be used for testing aflatoxins at 5-50 ppb in cannabis.