Amphetamine and amphetamine related drugs consist of a class of stimulants and hallucinogens used by students, athletes, and recreation drug users. Over the last 15 years, abuse of these drugs has become a global problem. In 2004, there were over 17,000 methamphetamine lab seizures in the US; and as a result, The Combat Methamphetamine Act of 2005 was signed into on law in 2006 to regulate over-the-counter sales of ephedrine, pseudoephedrine, and phenylpropanolamine products which are precursors used for the illicit manufacture of amphetamine and methamphetamine (1). In a 2005 report conducted by the European Monitoring Centre for Drugs and Drug Addiction, use of amphetamine and ecstacy has been growing throughout Europe (2). In recent years, a variety of screening/detection techniques have been commercially available such as ELISA and other immuno-based colorimetric and point of collection (POC) kits/devices. Although such assays are fast and efficient, many of which are typically not class-selective and will only detect some amphetamines and not others (3). Or, some immunoassays are not selective enough and recognize such a wide range of sympathomimetic amines, the positive predictive value (PPV) can range from 0-90% (4). In either case, an alternative and highly selective class-specific confirmation assay is required to verify immuno-based screening results. 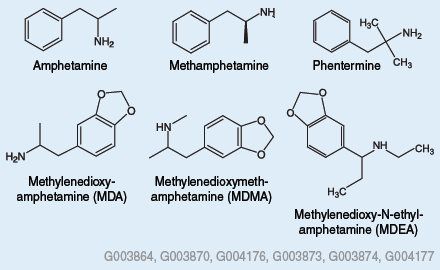 Molecularly imprinted polymers (MIPs) are a class of highly cross-linked polymer-based molecular recognition elements engineered to bind one target compound or a class of structurally related compounds with high selectivity. Selectivity is introduced during MIP synthesis in which a template molecule, designed to mimic the analyte, guides the formation of specific cavities or imprints that are sterically and chemically complementary to the target analyte(s). As a result, multiple interactions (e.g., hydrogen bonding, ionic, Van der Waals, hydrophobic) can take place between the MIP cavity and analyte functional groups. The strong retention offered between a MIP phase and its target analyte(s) allows for the use of exhaustive wash procedures during solid phase extraction that results in superior sample cleanup prior to analysis.

This leads to cleaner extracts, lower detection limits and a more efficient sample cleanup process. An illustration of the selective cavity is shown in Figure 2.

Amphetamine and the related drugs methamphetamine, phentermine, MDA, MDMA and MDEA were extracted from urine using both the SupelMIP SPE and a conventional hydrophilic polymer SPE via the procedures described in Table 1. Extracts were further analyzed via LC-MS-MS (Table 2). 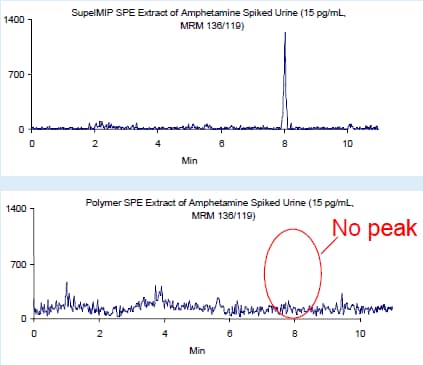 Urine samples were spiked with the amphetamine drugs listed in Figure 1 at the levels of 0.010, 0.015, 0.50, 1.0, and 5.0 ng/mL and extracted/analyzed using the methods described in Table 1 and Table 2. Relative recovery for each spike concentration was determined against deuterated internal standards. Greater than 80% relative recovery was achieved for all the spike levels tested (with the exception of MDA) using the SupelMIP SPE method. In contrast, 0% recovery was observed for all the amphetamine drugs at spike levels 0.010 and 0.015 ng/mL, and at spike levels 0.5, 1.0 and 5.0 ng/mL, recoveries above 80% were only observed for methamphetamine and MDMA using the conventional hydrophilic polymer method (data not shown).

Blank urine samples were cleaned up according to both SPE procedures. The SPE extracts were spiked with a mixture of the amphetamine drugs post extraction. Standards for the calibration curve were prepared in the reconstitution solvent.

In this report, we demonstrated the utility of a molecularly imprinted polymer SPE (SupelMIP) method designed for the class-selective extraction of amphetamine and related drugs from urine. When compared to a recently published conventional hydrophilic polymer SPE method, the SupelMIP method offers reduced ion-suppression and achieved lower LOQs/LODs by an order of magnitude. The highly selective SupelMIP method also offered increased recovery and reproducibility for better sensitivity, precision and accuracy.