Obesity is a prevalent health risk in many industrialized nations, and its occurrence is closely associated with a number of pathological disorders, such as non-insulin dependent diabetes, hypertension, cancer, and atherosclerosis.1 Because dysregulated adipogenesis and fat cell functions play central roles in these disorders, there has been a surge in efforts to understand the cellular and molecular mechanisms of adipocyte differentiation. Adipocytes are derived from multipotent human Mesenchymal Stem Cells (MSCs), which are found within the bone marrow stroma. MSCs have the potential to differentiate towards many different lineages of mesenchymal tissues including bone, cartilage, muscle, and fat.2

Most of our knowledge about adipogenesis comes from in vitro studies using preadipocyte culture systems.3 Human Adipose-Derived Stem Cells (ADSCs) are adult stem cells isolated from human lipoaspirates in adipose tissue, and like MSCs, differentiate in vitro toward the osteogenic, adipogenic, myogenic, and chondrogenic lineages when treated with established lineage-specific factors. Given the multi-lineage differentiation potential of ADSCs, these cells are phenotypically similar to MSCs,4,5 thus providing researchers an ideal system for studying adipogenesis. 3T3-L1 cells are undifferentiated fibroblast-like preadipocytes that are also frequently employed in most adipogenesis studies. These were clonally isolated from Swiss 3T3 cells derived from disaggregated 17- to 19-day-old mouse embryos.

Unique characteristics of adipocyte differentiation include dramatic changes in cell size, shape, membrane potential, metabolic activity, and responsiveness to signals.6 When ADSCs and 3T3-L1 cells commit to the adipocytic lineage, lipid-rich vacuoles accumulate within these cells. These vacuoles continue to develop over time and expand, eventually filling and enlarging the cellular diameter. We hypothesized that using the Scepter™ cell counter to rapidly assess size distributions of cellular populations would provide a quick, simple method for tracking adipocyte differentiation.

The Scepter™ cell counter captures the ease of automated instrumentation and accuracy of impedance-based counting using the Coulter principle in an affordable, handheld format. The instrumentation has been collapsed into a device the size of a pipette, and uses a combination of analog and digital hardware for sensing, signal processing, data storage, and graphical display in the form of a histogram. The 40 μm- and 60 μm-aperture sensor tips are engineered with a microfabricated, sensing zone that enables discrimination by cell size and cell volume at sub-micron and sub-picoliter resolution, respectively. The histogram output provides a quick snapshot of cell size and density.

This study outlines a method for tracking adipogenic differentiation of ADSCs and 3T3-L1 cells and subsequent sample analysis using the Scepter™ cell counter to measure these changes. We have employed Scepter™ technology for determining cell size and volume, as well as lipid vacuole staining using Oil Red O as a cross-validation histology screen to investigate the relationship between cell differentiation and cell size changes. Although the Scepter™ cell counter was intended primarily as a cell counting device, we demonstrate how it can also function as a reliable tool to track phenotypic change.

We implemented a previously-validated protocol for proper maintenance and treatment of preadipocyte cultures to differentiate into terminally differentiated adipocytes. We encountered slight variations in culture conditions for each cell type, but measurement of lipid vacuoles by Oil Red O staining remained the same for both cultures.

Adipose-Derived Stem Cells were plated at a density of 50,000 cells per well into gelatin (MilliporeSigma ES-006-B)-coated 12-well culture dishes with 1 mL medium per well. Cells were incubated at 37 °C in a 5% CO2 humidified incubator for 4 days. When the cells were 100% confluent, medium was aspirated from each well and replaced with 1 mL Adipogenesis Induction Medium (from Adipogenesis Kit SCR020). This medium change was set as differentiation day 1.

Medium was replaced with fresh Adipogenesis Induction Medium every 2-3 days for 14 days. After 0, 7 and 14 days of differentiation, adipocytes were fixed and the lipid droplets stained with Oil Red O Solution. Lipid droplets could be detected by microscopic examination as early as 5 days into the differentiation period.

When the cells were 100% confluent, the medium was aspirated from each well and replaced with 2 mL MDI Induction Medium. This medium change was set as differentiation day 0.

Oil Red O is a fat-soluble dye used for staining neutral triglycerides and lipids. This reagent is commonly used to identify exogenous or endogenous lipid deposits in cells. Here, we used Oil Red O for the detection of lipid-rich vacuoles commonly found in adipocytes. Prior to cell staining, cells (preadipocytes, 7 day differentiation, or 14 differentiation) were plated into a 24-well tissue culture plate.

Medium was first carefully aspirated from the cells. Adipocytes were fixed by incubating in 4% paraformaldehyde for 30-40 minutes at room temperature. The fixative was aspirated and cells were rinsed three times (5-10 minutes each) with 1X phosphate-buffered saline (PBS). The PBS was aspirated and the cells rinsed twice with water.

The Scepter™ cell counter was used to count samples following the detailed on-screen instructions for each step of the counting process. Briefly, the user attaches a 60 μm sensor tip, depresses the plunger, submerges the sensor into the sample, then releases the plunger drawing the cell suspension into the sensor. The Scepter™ cell counter detects each cell passing through 3 the sensor’s aperture, calculates cell concentration, and displays a size-based histogram as a function of cell diameter or volume on its screen. Scepter™ 2.1 software was then used to upload test files from the device and perform subsequent data analysis to determine cell size and relative cell frequencies for the preadipocyte cultures (ADSCs and 3T3-L1 cells). The initiation of differentiation culture conditions was noted to mark day 0, differentiation at day 7, and differentiation at day 14.

Preadipocyte cultures were treated with established lineage-specific factors for 14 days to drive adipogenesis and formation of terminally-differentiated adipocytes. Both ADSCs and 3T3-L1 cells were used in this study since both cell types have been commonly utilized when performing in vitro analysis of adipogenesis. Moreover, both cell types have been well characterized and contain the same cellular machinery as seen in multipotent mesenchymal stem cells. 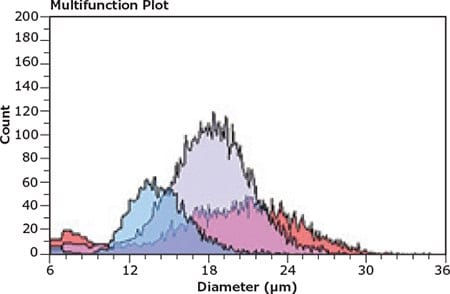 Figure 1.Preadipocytes (ADSCs) can be distinguished from differentiated adipocytes based on cell size.Using a 60 μm sensor, the Scepter™ cell counter enabled the discrimination of cell types based on size, with high resolution. ADSCs were measured at three key time points: Day 0 (control), seven (7) days after exposure to differentiation conditions, and fourteen (14) days differentiated. As indicated by the histogram data, cells gradually increased in size from 15 to 21 μm over the fourteen-day differentiation. 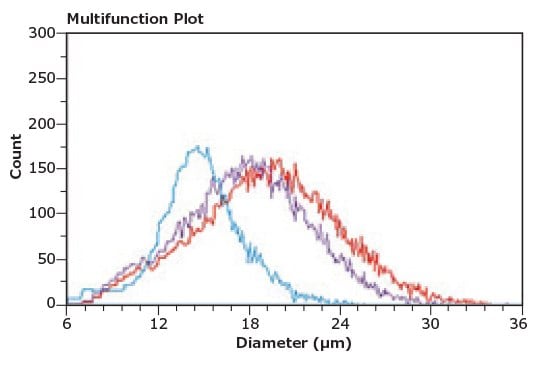 Figure 3. 3T3-L1 cell differentiation into adipocytes could be clearly identified based on changes in cell size. Using a 60 μm sensor, the Scepter™ cell counter enabled the discrimination of cell types based on size, with high resolution. Like ADSCs, 3T3-L1 cells were measured at three key time points: Day 0 (control), seven (7) days after exposure to differentiation conditions, and fourteen (14) days differentiated. As indicated by the histogram data, cells gradually increased in size from 15 to 21 μm over the fourteen-day differentiation.

Figure 4.Oil Red O staining was used to measure the lipid content of adipocytes obtained from differentiated 3T3-L1 cells. 3T3-L1 cells and differentiated samples taken from the same critical time points (7 and 14 days) were stained with Oil Red O. Again, a gradual increase in lipid content between days 7 and 14 during adipogenesis correlated with the cell size measurements determined by the Scepter™ cell counter. 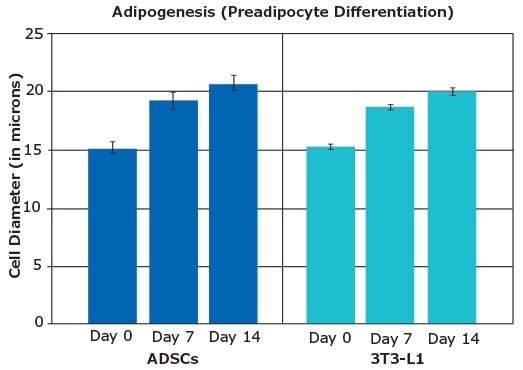 Using the Scepter™ cell counter to determine cell size and distribution of the cell cultures, an increase in cell size relative to the number of days during cell differentiation was accurately determined. Each experiment was performed on three separate occasions to validate our findings, and, each time, cross-validation using Oil Red O staining confirmed these results. Small standard deviations of the mean measured diameter of three cell samples demonstrated the precision of the Scepter™ cell counter (Table 1).

Mesenchymal stem cell research and understanding its relationship to adipogenesis remains an important area for research with the realization that society may be in the early stages of a global wave of obesity. The ability to isolate, expand, and direct the in vitro differentiation of ADSCs and 3T3-L1 cells to particular lineages provides the opportunity to study events associated with commitment and differentiation, and, in the case of this study, the development of terminally-differentiated adipocytes.

Adipocytes provide a safe place to store lipids. It has been well documented that during the process of adipogenesis, preadipocytes convert to a spherical shape and accumulates lipid droplets, resulting in an increase in cell diameter as these lipid-rich vacuoles fill and grow within the cell. The Scepter™ cell counter provides a rapid, easy, and inexpensive method for assessing ADSC and 3T3-L1 differentiation in culture. This handheld, automated cell counter delivers precise, reliable cell size measurements which provides the researcher with a quick snapshot of the status and the success of their differentiations in culture. As a result, researchers can fine-tune culture conditions and adjust analysis parameters to maximize information obtained from each experiment, make better experimental decisions, and ultimately, enjoy more productive research.