The circulating human immune system, presented as a single snapshot in a blood sample, is comprised of many cell types with distinct functional profiles that act in concert to defend the body against invading pathogens. In fact, most biological samples or cultured cells are heterogeneous mixtures of cells that differ in type, function, or health status. Such differences in cellular attributes are most frequently distinguished by measuring variations in surface marker expression through multiparameter flow cytometry. However, there are numerous instances where cell types or states in a sample may differ, and thus be distinguishable, by size alone.

The Scepter™ 3.0 Cell Counter combines the ease of automated instrumentation with the accuracy of the Coulter principle of impedance-based particle detection in a convenient, handheld format. The instrument uses a combination of analog and digital hardware for sensing, signal processing, data storage, and graphical display. The new design of the Scepter™ 3.0 Cell Counter has improved ergonomics for easier single hand operation, a larger display screen, and a more intuitive analytics user interface. The consumable microfluidic sensor has an aperture in its cell sensing zone that enables the instrument to use the Coulter principle to discriminate particle size and volume with submicron and subpicoliter resolution, respectively. The sensor has also been redesigned for effortless attachment and push button ejection. The device is also WiFi®-compatible for wireless data transfer.

The Scepter™ 3.0 Cell Counter, when used in conjunction with a 40 μm aperture sensor, can accurately count and precisely size a wide range of cell types and particles. This application note demonstrates two examples of experiments using the Scepter™ 3.0 Cell Counter’s sensitive size-discriminating capacity for rapid qualitative assessment of individual cell populations in the complex milieu of PBMC samples.

Human PBMC fractions were isolated from whole heparinized blood of healthy donors by Ficoll® Paque density gradient centrifugation. Briefly, 10 mL blood was diluted 1:3 with phosphate-buffered saline (PBS) and layered over 15 mL Ficoll. Samples were centrifuged at 400 x g for 30 minutes with no brake. The resulting PBMC layer was recovered by careful pipetting and washed twice with PBS (1000 x g for 8 minutes). After the final spin, cell pellets were resuspended in RPMI 1640 supplemented with 10% fetal bovine serum (FBS) (R10 medium).

All culturing experiments were performed in R10 media. PBMCs (500,000/mL, 24-well plates) were stimulated for 2 days in the presence of soluble anti- CD28 monoclonal antibody (2 μg/mL) on plates precoated with anti-CD3 monoclonal antibody (10 μg/mL). Mitogenic stimulation was carried out in the presence of phytohemagglutinin (PHA, 0.5 - 5 μg/mL). Cultures were sampled at 24- and 48-hours post-stimulation for analysis.

The Scepter™ 3.0 Cell Counter was used to count samples following the simple on-screen instructions for each step of the process. Briefly, the user attaches a 40 μm sensor, submerges the sensor into the sample (1.5 mL tube), and presses OK for sample acquisition. 50 μL of cell suspension is then drawn through the sensing aperture. The Scepter™ 3.0 Cell Counter detects each cell passing through the aperture, calculates concentration, and displays the sample’s population distribution in the form of a histogram as a function of size (diameter or volume). Once complete, the sensor is detached using the EJECT button.

The histogram can be further analyzed using the onboard Histogram Explorer. For each acquisition, two data files (PNG, CSV) are derived; files can be exported using a USB thumb drive or wirelessly via Wi-Fi® networks, where compatible.

For PBMC counting, 10 μL of each sample was mixed with 190 μL Guava® ViaCount Reagent and incubated for 5 minutes at room temperature. Cell count and viability data were acquired on a Guava® easyCyte™ HT flow cytometer using ExpressPro™ software.

For activation cultures, an aliquot of cells was harvested as described. To distinguish the activated fractions, samples were stained with anti-CD3-PE, anti- CD25-APC, and anti-CD69-Alexa Fluor® 488; acquired; and analyzed as described previously.

The Scepter™ 3.0 Cell Counter discriminates particles solely based on size according to the Coulter principle. To investigate whether the device can be used in the analysis of PBMCs, we first sought to understand the size distribution of particles present in these heterogeneous samples using flow cytometry.

PBMC isolates consist of live cells (of numerous subtypes), dead cells, and debris. The viability and debris components can vary greatly depending on properties inherent to the blood’s source as well as methods of storage and handling of the originating blood sample. To understand the relative proportion of the three particle types, samples were stained with a two-color fluorescent dye and analyzed by flow cytometry. This reagent is capable of distinguishing viable from non-viable cells based on differential permeabilities to two DNA-binding dyes. A cell permeant dye stains all nucleated cells; a cell impermeant dye brightly stains dying and dead cell fractions while debris remains unstained.

Results from a representative assay are presented in Figure 1A. In this example, more than 97% of cells were viable; we found > 95% viability for all PBMC preps in this study. The histograms in Figure 1B show distribution of the three classifications as a function of forward scatter (a flow-based correlate of size). The live cells constituted a peak distinct from that occupied by the smaller debris and dead cells. It is also apparent that the live cell fraction is composed of two differently sized but overlapping cell types.

Figure 1.Representative flow cytometry data demonstrating size-based discrimination of live cells from dead and debris. (A) Live cells (Red), dead (Pink), and debris (Blue) fractions were defined using ViaCount® Reagent. (B) The histograms demonstrate particle distribution within each fraction as a function of size (as measured by forward scatter).

Four main cell types occupy the PBMC compartment: T-cells, B-cells, NK cells, and monocytes. To investigate the distribution of these cells with respect to size, PBMCs were stained with fluorescent antibodies specific for each cell type (Figure 2). The dot plots confirmed definition of each cell type by its respective surface marker. Figure 2C shows that, in resting PBMCs, T, B, and NK cells were generally smaller in size (lower forward scatter value) than CD14+ monocytes. These findings suggest the monocyte compartment is uniquely distinguishable from all other lymphocytes by size alone.

Figure 2.Representative data from multi-color flow cytometry analysis on human PBMCs. (A) 2D plot - Live cells (Red) are distinguished from debris/dead cells (Green) by forward vs. side scatter. A histogram plot depicts the same data defined by forward scatter. (B) Live cells from (A) are fractionated into subsets based on CD3, CD19, CD16/56, and CD14 expression. (C) The histograms show localization of the fours subsets with regards to the two peaks defined by forward scatter. The three main lymphocytes subsets resolved within the smaller (Blue) peak while CD14+ monocytes are restricted to the larger (Pink) peak.

To examine the ability of the 40 μm Scepter™ 3.0 Sensor to discriminate lymphocytes from monocytes, freshly prepared PBMC samples were analyzed using the Scepter™ 3.0 Cell Counter and by flow cytometry. Representative histogram plots are presented in Figure 3. Three main peaks (debris, lymphocyte, and monocyte) were distinguishable by size alone with each of the analysis methods. In total, seven PBMC samples were analyzed (Table 1). Consistent with previous reported values, the average mean cell diameters were 7.52 ± 0.24 μm and 10.73 ± 0.34 μm for lymphocytes and monocytes, respectively. There was quite a range in relative % seen for the two subsets likely owing to differences in donor health status and, potentially, sample prep. As shown, the relative % of each subset was quite consistent across the three methods of analysis with values varying by less than 10%. It should be noted that gating based on size (on either platform) is subject to bias in placement, particularly where there is little true distinction between the overlapping populations. A large percentage of cell-based assays in immunological applications, including ELISpots and other assays where readouts are based on responder frequencies, require an accurate determination of the starting cell count. To evaluate the counting accuracy of the Scepter™ 3.0 Cell Counter, PBMC samples were assessed across a range of cell concentrations. As seen in Figure 4A, the Scepter™ 3.0 Cell Counter performed with high linearity across multiple samples at various starting concentrations (R2 > 0.99). Further, in comparison with a capillary-based flow cytometer capable of direct cell counting, the two platforms performed roughly equivalently when counting total cells or lymphocytes only (Figures 4B and 4C). Overall, the standard deviation among replicates was significantly lower for the Scepter™ 3.0 Cell Counter than by flow cytometry; this is likely due to difference in sampling between the two platforms. The Scepter™ 3.0 Cell Counter acquires samples based on a precision pump mechanism while samples are manually pipetted at the start of the flow assay.

Figure 4.(A) Scepter™ 3.0 Cell Counter performs with a high degree of linear accuracy across a range of PBMC samples at varying cell inputs. (B, C) For the same samples, concentration determination for Total Cells and Lymphocytes was compared to a capillary-based flow cytometer. This design does not require sheath during sample acquisition thus enabling direct cell count measurements.

In response to antigenic stimuli, immune cells undergo numerous physical and functional changes including increased cell size, secretion of cytokines, and modulation of surface markers such as CD69 and CD25. Assays measuring changes in lymphocyte activation are commonly used to identify patterns of immune response in clinical diagnostics and therapeutic design. To address the potential use of the Scepter™ 3.0 Cell Counter for rapid qualitative monitoring of immune cell activation as represented by an increase cell size, freshly isolated PBMCs were stimulated in culture using two different mechanisms: (1) CD3/CD28 antibodymediated co-stimulation of the T-cell receptor and (2) mitogenic activation by PHA.

In Figure 5, the Scepter™ 3.0 Cell Counter’s ability to detect cell activation was compared to size-based flow cytometric analysis. While the Scepter™ 3.0 Cell Counter was able to detect the presence of a larger, activated cell fraction, the device was limited in its ability to truly discriminate between activated and nonresponsive cells. Similarly, the flow cytometer was also unable to precisely define the two states by size alone; the use of surface markers (CD69+, CD25+) was required for precise quantitative determinations (data not shown). A similar issue is depicted in Figure 6 where histogram overlays are used for simultaneous depiction of multiple samples. The inhibiting factor in both cases is likely the increased presence of debris and dead cells which overlap with the lower end of the live cell fraction. Beyond activation and the resulting change in cell size, stimulation also directs rapid cell proliferation of the activated cells and death among non-responsive cells. This issue represents a clear demonstration of the limitation of the Scepter™ 3.0 Cell Counter, and all other size-based analytical methods, with regards to quantitative subset analysis. 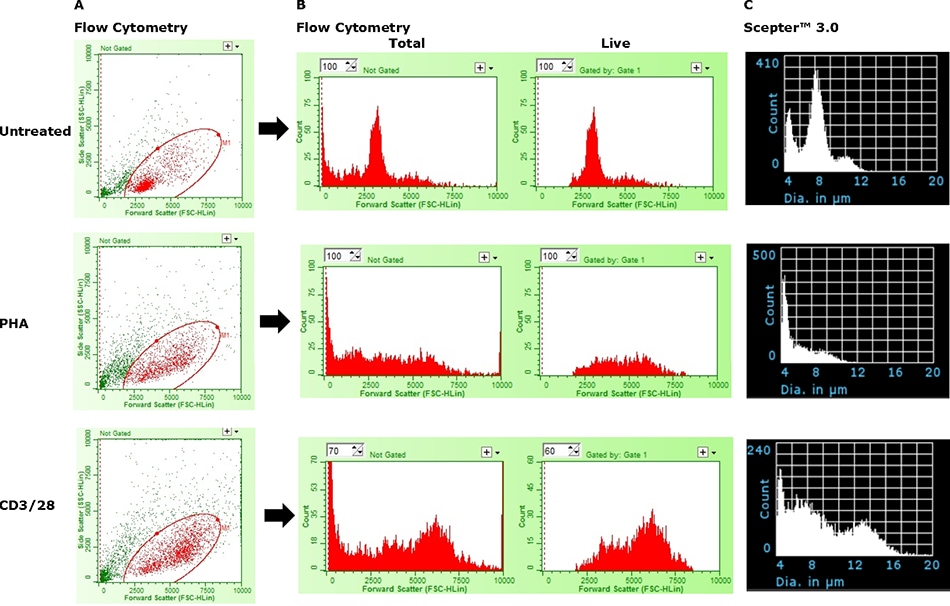 Figure 5.Limitations of the Scepter™ 3.0 Cell Counter in absolute discrimination of activated and non-responsive cells. (A) Live cells (Red) were distinguished from dead cells and debris (Green) using ViaCount™ Reagent. (B) The two histograms in each row show the relative distribution of total and live events as a function of particle size (Forward Scatter). (C) Histogram data from same samples acquired on a Scepter™ 3.0 Cell Counter using 40 μm sensors. 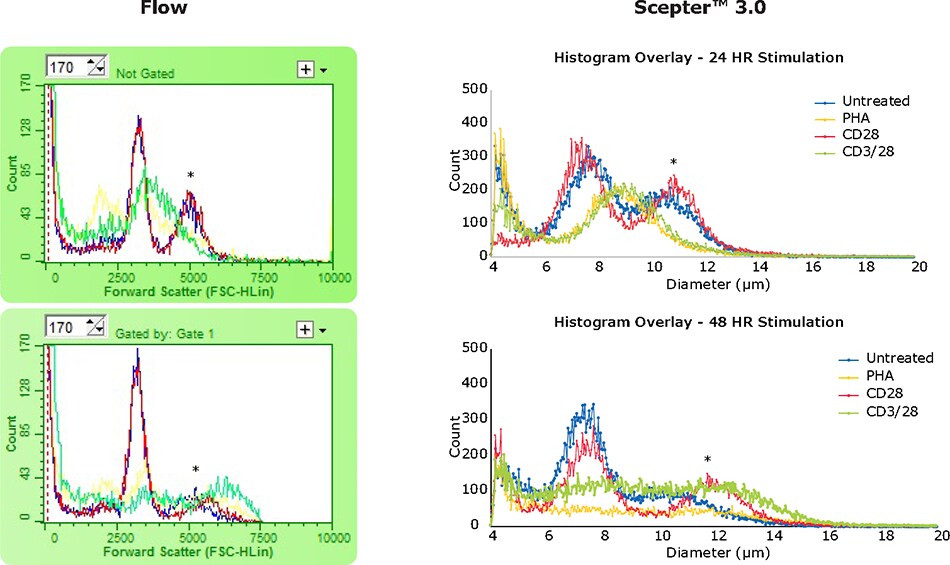 Evaluation of immune responsiveness to potentially harmful exposures is an important tool in the assessment of pathogenicity and toxicity. The availability of simplified methods for identifying activation states of cells and for measuring differences in the relative frequencies of multiple cell types in samples or mixed cultures is useful for accelerating research in these fields. We have presented data indicating that the Scepter™ 3.0 Cell Counter can quantitatively determine the total number of cells and sub-types of cells in freshly isolated PBMCs and cultured samples.However, for activated PBMC samples, one caveat is the issue with high debris and/ or dead cell content obscuring accurate discrimination of cell subsets based solely on size measurement. Flow cytometry, through the power of multiparameter fluorescent detection, can overcome these limitations. However, far more sophisticated platforms require significant setup, training, and time to operate with proficiency. In contrast, the Scepter™ 3.0 Cell Counter is a convenient tool that can be used in the tissue culture hood to provide qualitative insight into cell health and cellular responses in approximately 30 seconds.