Polyamino acids facilitate the attachment of cells and proteins to solid surfaces in biological applications. In cell cultures normal attachment, growth, and development of many cell types are dependent on attachment factors and extracellular matrix components. While some cells are able to synthesize these components, others require an exogenous source, particularly when grown in serum-free culture. To help facilitate attachment, cell spreading, growth, morphology, differentiation, and motility of your cells, We offer a number of sterile, cell culture tested polyamino acids. In histochemical applications both polymers of D- and L-lysine are used to coat slides to promote attachment of cells. Poly-L-lysine has also been reported to improve protein coating of ELISA plates. 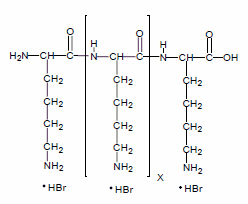 Poly-L-Lysine is a charge enhancer; therefore, it can be used for coating many surfaces.