Live cell imaging is an ideal method for measuring the hallmarks of cancer, such as apoptosis and hypoxia. Cancer cells are known for their ability to escape apoptosis, the mechanism by which a cell activates its own death in response to external stimuli. Hypoxia, an environment characterized by low oxygen, is another common characteristic of solid tumors. Hypoxic cancer cells are typically more resistant to apoptosis and chemotherapy, enabling metastasis and aggressive malignant phenotypes. A hypoxic microenvironment devoid of nutrients prevents the cell from undergoing energy dependent apoptosis and cells become necrotic. Hypoxia inducible factor 1 (HIF-1), can initiate apoptosis by inducing high concentrations of proapoptotic proteins, such as BNIP3, and can cause stabilization of p53. Caspases are a family of protease enzymes that play an essential role in programmed cell death and inflammation. Severe hypoxia can induce caspase-9 and caspase-3 activation which leads to apoptosis. 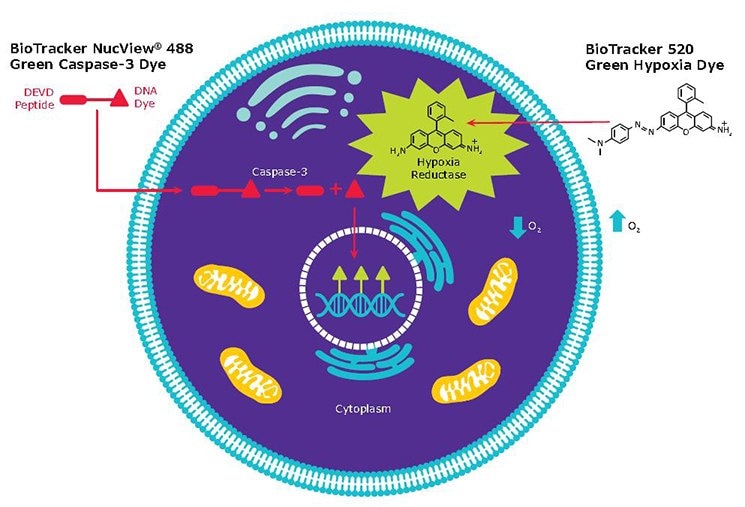 A431 epidermal carcinoma cells (85090402) were incubated 16 hours overnight with or without 3μM BioTracker 520 Green Hypoxia Dye (SCT033) in complete DMEM (SLM-241-B) by gravity perfusion at 37 °C under normoxic condition (20% O2) ) using the CellASIC® ONIX2 System (M04S-03-5PK). After overnight culturing, cells were perfused with complete media without dye at 1psi under hypoxic condition (0% O2) for 16 hours at 37 °C. Images were taken from cells treated with and without dye after 16 hours culturing under hypoxic conditions (0% O2) under the identical image settings using FITC channel. For time course experiment, fluorescent images were captured every 3 hours over a 16-hour time. 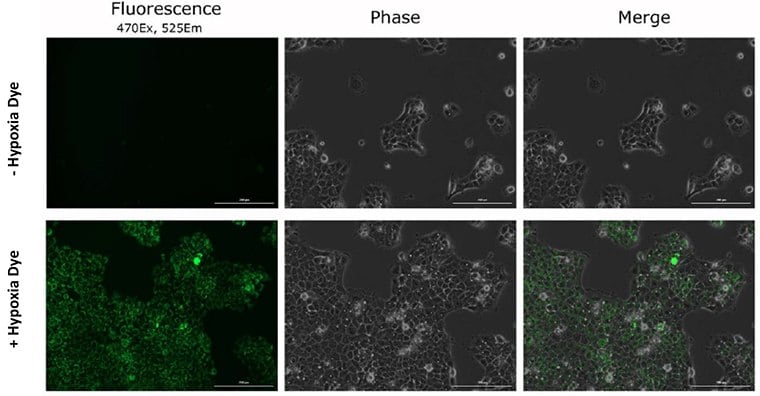 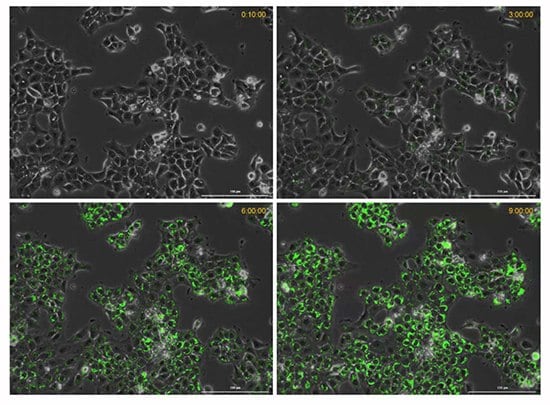 Programmed cell death/apoptosis and hypoxia play a crucial role during the development and homeostasis of many biological systems. While much of the studies have relied on biochemical or molecular approaches to investigate, live cell imaging of apoptotic and hypoxic processes in suspension cells presents unique challenges due to their nonadherent nature. Here we present dynamic live cell imaging of CD95 (Fas,Apo1) mediated apoptotic process of Jurkat Tcells and hypoxic A431 cancer cells at single cell level using the CellASIC ONIX microfluidic system. Using a caspase-3 specific DNA binding probe (SCT101) and a cellualr reductase mediatiated hypoxia dye (SCT033), we visualize the onset of apoptotic nuclear morphology and phosphatidylserine(PS) translocation and hypoxia, respectively, in a multiplexed fashion. We successfully monitor temporal population dynamics of CD95 induced Tcell apoptosis and hypoxia at single cell level with clear delineation of kinetics between these two apoptotic events,as well as the heterogeneity of responses to CD95. By enabling single cell monitoring of cellular responses to vary ingreagents via on demand perturbation, the technology can provide deeper insights into the mechanism of apoptosis and hypoxia, and is also amendable to wide ranging live cell image based study of cell biology in general.