Many key research findings in cell function and pathogenesis have relied on labeling live cells. To study individual cell behavior, growth and differentiation, and cell-cell interactions, it is critical to be able to permanently “tag” a population of cells without affecting their morphology or function. Studies of cellular phenomena like adhesion, conjugate formation, cytotoxicity, phagocytosis, growth promotion, survival time, apoptosis, and hybridoma fusion all rely on dependable nontoxic, stable cell labeling.

Early methods for labeling cells employed fluorescent labels such as fluorescein, rhodamine, Dil-C18-(3), or Hoechst dyes; or radiolabels like 125I-idoxuridine, 111In-indium oxine and 51Cr-sodium chromate. These methods served well in their time, but each has limitations and drawbacks.1 Some are not stable enough, so they leak and transfer to other cells in a mixed population, confounding results. Others alter cell function or are cytotoxic, and thus cause experimental artifacts related directly to their use. Finally, these methods often label weakly or non-uniformly, making detection difficult and design of reliable labeling protocols impossible.

The PKH Fluorescent Cell Linker Kits avoid all the pitfalls of these traditional methods. Now, there is a cell labeling method that is the single “best way” to consistently and reliably label viable cells (Table 1). Named for their discoverer, Paul Karl Horan, PKH dyes are patented fluorescent dyes and a cell labeling technology2 that has been used successfully with animal, plant, and bacterial cells, and even non-cellular membrane-containing particles.3 Labeled cells can be studied in culture and in vivo. Rapidly dividing cells like hybridomas, as well as non-proliferative cells like red blood cells, can be labeled and tracked.

The versatility of PKH cell-labeling technology is attributable to its innovative chemistry. Intensely fluorescent dye moieties are attached to long, lipophilic tails. During the short general membrane staining procedure – only 1-5 minutes – the lipophilic tails diffuse into the cell membrane, leaving the fluorogenic moiety exposed near the outer surface of the cell.

The stable partitioning of these molecules into the membrane permits long-term monitoring while leaving the important functional surface proteins unaltered. In fact, all cellular functions, from proliferation to cell-surface antigen recognition, are largely unaffected by PKH dye tagging. In short, labeled cells behave just like unlabeled ones, but are easier to track.

PKH dye labeling protocols can usually be optimized to give over 75% viable labeled cells with mean fluorescence more than 1,000 times background (Figure 1). Such high signal-to-noise ratios are especially important when tagging proliferating cell lines because each daughter cell gets only half its parent’s label. With PKH dyes, up to ten generations can be followed before the intensity of the label falls near background (Figure 2). 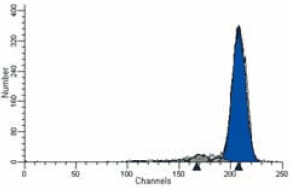 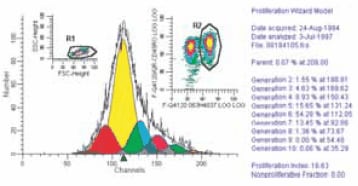 Three different PKH dyes are used for labeling cells – PKH2, PKH26, and PKH67. PKH2 and PKH67 are green fluorescent labels; both can be detected with microscopes and flow cytometers equipped with fluorescein filters. Since their emission spectra have little overlap with the red region, they are ideal for cytotoxicity studies4,5 in conjunction with red fluorescent viability probes like propidium iodide (PI) and 7-aminoactinomycin D (7-AAD), as well as with other red labels like R-phycoerythrin and Texas Red. They are also excellent for plant studies because they avoid interference from chlorophyll autofluorescence in the red region.

The in vivo half-life of PKH2 is 5-8 days, making it excellent for short- to medium-term studies. PKH67 has a longer aliphatic tail than PKH2, resulting in more stable labeling and less cell-to-cell transfer.6 It is expected to have an in vivo half-life of 10-12 days. Previous users of PKH2 may find that PKH67 gives even better results for longer-term studies and for studies in which it is essential to minimize cell-to-cell transfer.

PKH26 is a red fluorescent dye. It offers the longest in vivo halflife – greater than 100 days – making it ideal for in vivo cell tracking, cell proliferation studies, and other long-term assays.7-9 Rhodamine or phycoerythrin (PE) filters are suitable for PKH26 detection. Standard fluorescein excitation wavelengths may be used, but fluorescence intensity will be somewhat reduced.

PKH26 is complementary to the green PKH dyes. It can be quantitated without interference from PKH2, PKH67, or fluoresceintagged antibodies in studies of mixed cell populations (Figure 3).

The in vitro general cell labeling procedure can be used for monocytes, macrophages, lymphocytes, and other cells in suspension. Cells grown on the surface of tissue culture vessels may be stained in situ but heterogeneous staining may result. For homogeneous staining, adherent cells should first be suspended with a proteolytic treatment (e.g., trypsin + EDTA).

Figure 4 represents the protocol schematically. A 23 cell suspension and a 23 dye solution, both in the PKH diluent supplied with the kit, are mixed and incubated briefly at room temperature. The labeling reaction is stopped by addition of protein (medium with serum or BSA). Labeled cells are washed 3-5 times to remove unbound dye. General cell labeling should be performed prior to monoclonal antibody staining to avoid capping the antibody with the dye.

Phagocytic cells can be selectively labeled in the prescence of non-phagocytic cells by using an alternate diluent. In this diluent, dyes do not dissolve, but instead form microaggregates; these microaggregates cannot become embedded in membrane, but can be ingested by phagocytosis. This method has been used to study lifetime and migrational patterns of macrophages and neutrophils in vivo.

For analysis of proliferation based on the dye dilution profile, we recommend the Proliferation Wizard module in the Modfit software (Verity Software House, Topsham, ME).

PKH Fluorescent Cell Linker Kits use patented fluorescent cell linker technology to incorporate reporter molecules into the cell membrane. Labeled cells retain both biological and proliferative activity, and are ideal for cell tracking and cell-cell interaction studies. Due to the nonspecific labeling of the dyes, a wide variety of cell types have been labeled successfully. The linkers have been applied to both animal and plant cells. Table 2 lists common cell types that have been successfully labeled and Table 3 lists many PKH dye applications. 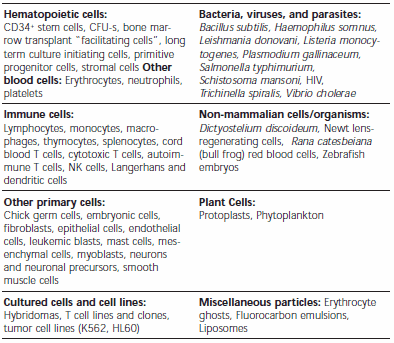