Continuous immortalized cell lines are comprised of a single cell type that can be serially propagated in culture either for a limited number of cell divisions (approximately thirty) or otherwise indefinitely. Cell lines of a finite life are usually diploid and maintain some degree of differentiation. The fact that such cell lines senesce after approximately thirty cycles of division means it is essential to establish a system of Master and Working banks in order to maintain such lines for long periods.

Continuous immortalized cell lines that can be propagated indefinitely generally have this ability because they have been transformed into tumor cells. Tumor cell lines are often derived from actual clinical tumors, but transformation may also be induced using viral oncogenes or by chemical treatments. Transformed cell lines present the advantage of almost limitless availability, but the disadvantage of having retained very little of the original in vivo characteristics.

Primary cell lines are derived directly from excised tissue and cultures either as an explant culture or following dissociation into a single cell suspension by enzyme digestion. Such cultures are initially heterogeneous but later become dominated by fibroblasts. The preparation of primary cultures is labor intensive and they can be maintained in vitro only for a limited period of time. During their relatively limited lifespan primary cells usually retain many of the differentiated characteristics of the cell in vivo. Important Note: Primary cultures by definition have not been passaged, as soon as they are passaged they become a cell line and are no longer primary.

More recently, stem cells lines are been a popular cell model used in research due to their unlimited growth characteristics and plasticity. These cells have the unique ability to self-renew or to differentiate into various cell types in response to appropriate signals within the body. These properties provide stem cells with unique capabilities for tissue repair, replacement, and regeneration.

In terms of growth mode cell cultures take one of two forms, growing either in suspension (as single cells or small free-floating clumps) or as a monolayer that is attached to the tissue culture flask. The form taken by a cell line reflects the tissue from which it was derived. For example, cell lines derived from blood (leukemia, lymphoma) tend to grow in suspension whereas cells derived from solid tissue (lungs, kidney) tend to grow as monolayers. Attached cell lines can be classified as 1) endothelial such as BAE-1, 2) epithelial such as HeLa, 3) neuronal such as SH-SY5Y, or 4) fibroblast such as MRC-5. 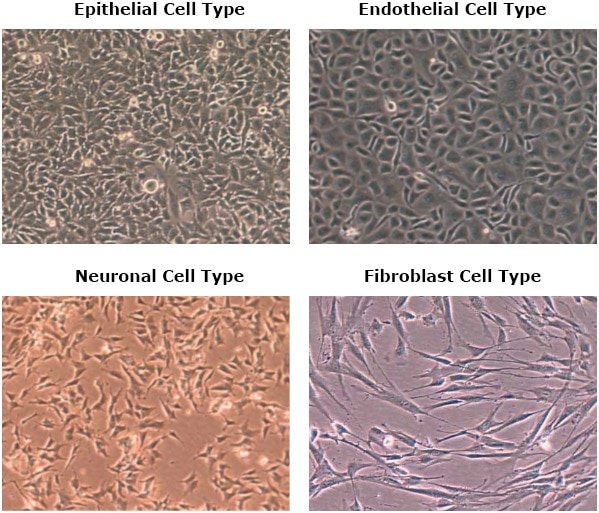 The European Collection of Authenticated Cell Cultures (ECACC) is one of the world’s largest biological cell banks supplying a diverse range of authenticated cell lines. All 3000+ cell lines can be ordered through us. Browse the ECACC catalog.

It is important to know and record the growth characteristics of the cell line in use before starting any experiments including cell viability and proliferation rates. An alteration in cellular growth can indicate a significant problem within the cell line and if undetected, can have detrimental effects on experimental results.

A typical growth curve for cultured cells displays a sigmoid pattern of proliferation. The growth phases associated with normal cells are defined as:

In Vitro Age of a Cell Culture

Two terms are predominantly used to define the age of a cell culture: (i) passage number - indicates the number of times the cell line has been subcultured and (ii) the population doubling (pd) number - indicates the number of cell generations the cell line has undergone i.e. the number of times the cell population has doubled. The in vitro age of a cell culture is particularly useful to know for cell lines with a finite lifespan or unstable characteristics that change over time in continuous culture.