The reaction between an azide and a phosphine forming an aza-ylide was discovered almost a century ago by Nobel Prize laureate Herrmann Staudinger. It has found widespread application in chemical synthesis, but only recently its value as a highly chemoselective ligation method for the preparation of bioconjugates has been recognized.1 Both reactive functionalities involved in this reaction are bioorthogonal to virtually all naturally existing functionalities in biological systems and readily combine at room temperature tolerating an aqueous environment. These ideal conditions make it possible to exploit the Staudinger ligation even in the complex environment of living cells.

Staudinger and Meyer first reported in 1919 that azides react smoothly with triaryl phosphines to form iminophosphoranes after elimination of nitrogen (Scheme 1).2 This imination reaction proceeds under mild conditions, almost quantitatively, and without noticeable formation of any side products.

The resulting iminophosphorane with its highly nucleophilic nitrogen atom can also be regarded as an aza-ylide (Scheme 2). It may be intercepted with almost any kind of electrophilic reagent. Common pathways include aqueous hydrolysis forming a primary amine and a phosphine(V) oxide in the so-called Staudinger reduction. Quenching with aldehydes or ketones yields imines, which is known as the aza-Wittig reaction. Even carbonyl electrophiles with low reactivity, like amides or esters, react with iminophosphoranes, especially if the reaction can take place intramolecularly (Scheme 3). 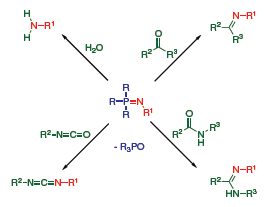 Bertozzi et al. pioneered the application of the Staudinger reaction as a ligation method for bioconjugates. In the course of their studies on the metabolic engineering of cell surfaces they designed a phosphine with an ester moiety as an intramolecular electrophilic trap. After formation of the iminophosphorane from the newly designed phosphine reagent and an azide, the ester moiety captures the aza-ylide in a fast intramolecular cyclization reaction before hydrolysis with water can occur. This process ultimately produces a stable amide bond.3

The phosphine reagent can be synthesized from aminoterephthalic acid methyl ester by diazotization, followed by iodination and subsequent Pd-catalyzed phosphinylation (Scheme 4). The free acid moiety allows the easy attachment of a wide choice of molecular probes to the phosphine reagent by standard esterification or amidation procedures. Thus, a fluorescence label or different detection probe can be linked to any biomolecule that has been equipped with an azide function by the Staudinger ligation even in living cells (Scheme 5). The following paragraph shows how GlycoProfile™ azido sugars can be incorporated into glycan structures in vivo, and be used to attach a FLAG® phosphine probe chemically.

The GlycoProfile™ Azido Sugar portfolio consists of three peracetylated azido sugars that may be incorporated into glycan structures chemically or by using existing biosynthetic pathways of mammalian cells.4 Orthogonally to chemical and biological carbohydrate or peptide synthesis, the azide moiety offers an ideal anchor to attach the modified glycan to surfaces, labels, peptides, or proteins. Labelling even works in vivo by using an alternative metabolic-system approach. The acetyl groups increase cell permeability and allow the unnatural sugars to easily pass through the cell membrane. Carboxyesterases remove the acetyl groups once the monosaccharide is in the cell. Cells metabolize the azido sugars using glycosyltransferases and express the sugars on the terminus of a glycan chain both intracelullarly and on the cell surface, leaving the azido group unreacted. N-Azidoacetylmannosamine may also be introduced into the sialic acid biosynthesis pathway. A phosphine probe containing a detection epitope such as the FLAG® peptide can be selectively bound to the glycan by Staudinger Ligation, resulting in a post-translationally modified glycoprotein that is detected in vivo by using a FLAG®-specific antibody. This approach permits the analysis of pathways that are regulated by particular glycan post-translational modifications as well as the monitoring of the intracellular glycosylation process itself. 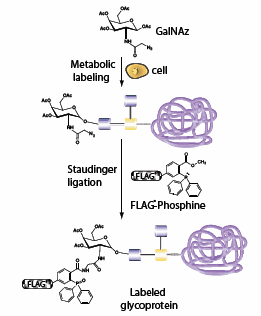 Although the previously described methods for Staudinger ligations work well even in biological environments, a modification forming a native amide bond without leaving the unnatural phosphine oxide moiety in the product would be more attractive yet. In 2000, the groups of Bertozzi and Raines simultaneously introduced alternative ligation strategies.5 Based on the same working principle as the nontraceless Staudinger Ligation the auxiliary phosphine reagent can be cleaved from the product after the ligation is completed leaving a native amide bond. Thus, the total chemical synthesis of proteins and glycopeptides is enabled overcoming the limitations of native chemical ligation (NCL) of a Cys residue at the ligation juncture.

Among the suitable phosphine reagents for traceless Staudinger ligations, diphenylphosphinemethanethiol (Figure 1), developed by Raines and co-workers, exhibits the best reactivity profile and has already found widespread application. This Raines ligation reagent is first acylated. Treatment with an azide leads to the formation of an aza-ylide. The nucleophilic nitrogen atom of the aza-ylide then attacks the carbonyl group, cleaving the thioester. Hydrolysis of the rearranged product finally produces a native amide and liberates the auxiliary as its phosphine(V) oxide (Scheme 6).6

It’s recommended to use a freshly prepared Raines ligation reagent because it has only a limited stability. In this issue of ChemFiles, Sigma-Aldrich® proudly introduces new product 670359 as a shelf-stable, convenient source for this highly useful reagent (sold under license for research and development purposes only. U.S. Patent 6,974,884 and related patents apply). In the acetylthiomethyldiphenylphosphine borane complex 670359, the thiol and phosphine moiety are protected as acetyl ester and borane adduct, respectively. The active Raines ligation reagent can be liberated easily by treatment with DABCO® at 40 °C followed by basic ester cleavage (Scheme 7). Hackenberger and co-workers showed that acidic deprotection of the phosphine-borane was advantageous in glycopeptide and cyclopeptide preparations.7 In the latter case, a linear peptide with terminal azide and phosphine-borane groups was synthesized by SPPS. 95% TFA was used to deprotect the phosphine and the amino acid side chains simultaneously in a single step. Diisopropylethylamine (DIPEA) was then added to trigger the peptide macrocyclization by traceless Staudinger ligation, yielding cyclic Microcin J25 with 21 amino acids. Other Staudinger ligation induced macrocyclizations have been published previously by Maarseveen and co-workers, who successfully used the Raines ligation reagent for the synthesis of a series of medium-sized lactams.8 Wong and co-workers reported the synthesis of 14 different glycopeptides through the traceless Staudinger Ligation.9 For this work, they also developed a protease-catalyzed method to selectively introduce an N-terminal azido group into an unprotected polypeptide, as it was needed for the subsequent ligation reaction.