Introduction to Uronium and Guanidinium Reagents for Peptide Coupling

The need of solid-phase peptide synthesis (SPPS) for rapid and highly efficient coupling reagents led to the development of several new reagents starting from BOP (benzotriazol-1-yloxytris(dimethylamino)phosphonium hexafluorophosphate). The HOBt (N-hydroxybenzotriazole) derived components HBTU (Product No. 12804) and TBTU (Product No. 12806) belong to the most widely used reagents for peptide coupling and feature a broad application spectrum. HBTU and TBTU differ only by their counterions hexafluorophosphate or tetrafluoroborate, respectively. A comparison study showed that these anions have no significant influence on the coupling rate or racemization.

For a long time, the active HBTU and its family were believed to possess an uronium structure, but intensive studies provided evidence for the formulation of guanidinium N-oxides.1 Nevertheless, by custom, they are still called uronium type reagents. Unlike carbodiimides or phosphonium reagents, uronium salts could form tetramethylguanidinium derivatives with free amines. To circumvent this side reaction, excess reagent should be avoided and pre-activation of the carboxylic acid component is recommended.

Besides HBTU and TBTU, several other members of the uronium family are worthy of attention. The 7-aza-analogue of HBTU called HATU (1-[bis-(dimethylamino)methyliumyl]-1H-1,2,3-triazolo[4,5- b]pyridine-3-oxide hexafluorophosphate) (Product No. 445460) can be considered today’s gold standard of peptide coupling reagents. It has been used for difficult amide bond formation in solution and solid-phase (e.g., PNAs) synthesis.2 It is especially superior for macrocyclization, fragment condensation, and the coupling of N-substituted amino acids. Danishefsky reported an impressive example for the application of HATU in a late step of the total synthesis of Hemastatin with HATU simultaneously connecting two peptide macrocycles.3 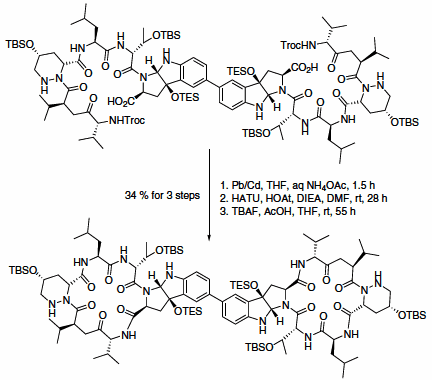 Scheme :Application of HATU in the simultaneous cyclization of two linked peptide strands for the synthesis of hemastatin.

Substitution of HBTU’s dimethylamino groups by pyrrolidine residues as in HBPyU leads to less racemization during peptide coupling.4 Introducing an electron-withdrawing group into the benzotriazole moiety enhances the reactivity. Accordingly HCTU and TCTU show improved performance in difficult or hindered couplings and cyclizations when compared to HBTU.5 HCTU has also proven suitability for tandem oligonucleotide coupling on solid phase supports in a competitive study.6 TDBTU, TPTU, HOTU and TOTU are recommended for fragment condensation and other critical cases leading to minimal racemization.7

TSTU and HSTU are less efficient than their HOBt and HOAt derived analogues. They compensate for the disadvantage with greater stability in aqueous solvent mixtures allowing the modification of proteins.8

The thiouronium reagent TOTT (S-(1-oxido-2-pyridyl)- N,N,N’,N’-tetramethylthiuronium tetrafluoroborate) is ideally suited for the rapid and high-yielding preparation of primary amides when reacted with carboxylic acids and ammonium chloride.9