Olefin metathesis is now a well-entrenched synthetic technique, and is a powerful method for the clean construction of innumerable classes of chemical architectures. The broadly accepted belief that this key method transformed the landscape of synthetic chemistry ultimately led to the awarding of the 2005 Nobel Prize in Chemistry to the pioneers in olefin metathesis: Yves Chauvin, Robert H. Grubbs, and Richard R. Schrock. Late-transition metal alkylidene complexes, specifically ruthenium alkylidenes, have propelled this synthetic methodology in to the forefront of carbon–carbon bond forming techniques in large part because of the functional group tolerance of these catalysts, and their ability to be handled without the use of glove box or Schlenk techniques. As shown below, ruthenium alkylidenes participate in a host of reaction paradigms, all under the umbrella of olefin metathesis.1 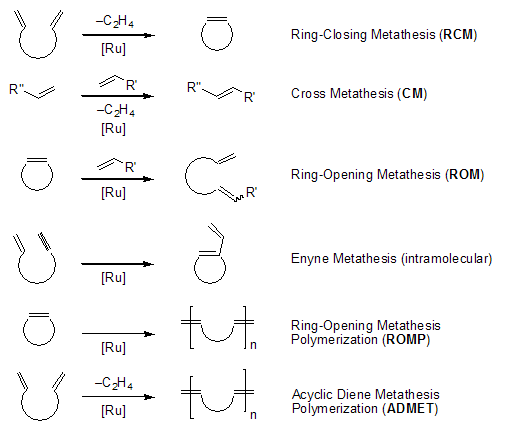 A majority of the successful examples in the above reaction classes were achieved using the stalwarts of Ru-based olefin metathesis: the Grubbs Catayst® 1st and 2nd generations, or the Hoveyda–Grubbs analogs thereof.

We are proud to be the exclusive research scale supplier of Umicore's ruthenium metathesis catalysts, including first- and second-generation Grubbs and Hoveyda–Grubbs catalysts. We have recently expanded our portfolio to include five state-of-the-art catalysts, with unique reactivities and tailored initiation rates. These “next-generation” catalysts expand the scope of this powerful reaction class, allowing for example, metathesis reactions to be performed at low temperatures, and for the formation of tetrasubstituted olefins via cross metathesis.

Innumerable instances of RCM employing Grubbs and Hoveyda–Grubbs first- and second-generation catalysts in small molecule and natural product syntheses have been reported. For example, the Danishefsky group employed Grubbs second-generation catalyst in the total synthesis of migrastin, a macrolide isolate from Streptomyces found to inhibit human tumor cell migration.1

More recently, modified versions of the Grubbs and Hoveyda–Grubbs second-generation catalysts were reported to be highly active in the preparation of tetrasubstituted olefins via RCM. It is believed that the replacement of the mesityl substituents on the NHC ligand with o-tolyl groups creates a less sterically encumbered complex, allowing for coordination of bulkier olefins. 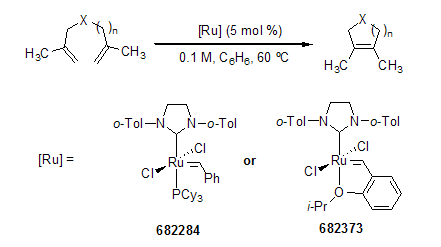 Cross-metathesis is a powerful method for the rapid synthesis of simple and complex olefinic building blocks, and an excellent model has been developed by Grubbs to predict the outcome of cross-metathesis reactions, based upon reactant olefin type (i.e., propensity of the olefin towards homodimerization, and reactivity of those homodimers towards further metathesis) and catalyst used.1 Both first- and second-generation catalysts can be used in CM, with the latter exhibiting excellent reactivity in effecting the metathesis of sterically demanding or highly deactivated olefin substrates.2 Some examples of these more difficult metatheses employing second-generation catalysts are illustrated below.3

Enyne Metathesis Although not as thoroughly explored as olefin metathesis, enyne metathesis is a powerful method for the construction of 1,3-dienes, either in an intra- or intermolecular fashion.1 The intramolecular variant has been applied to the synthesis of heterocycles, and in the case of intermolecular reaction, stereoselective enyne cross-metatheses have been reported.2 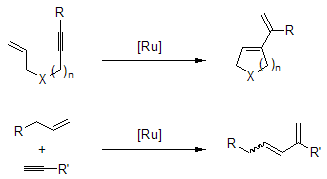 As shown below, the 3-bromopyridine-ligated ruthenium complex was found to be extremely active in the controlled living polymerization of norbornene and oxo-norbornene derivatives. Polymers generally exhibited narrow polydispersities, in contrast to polymers obtained using Grubbs second-generation catalyst.

Control of Olefin Isomerization During Metathesis ReactionsSeveral reports have been published on methods to suppress the olefin migration in the course of metathesis reactions, including using additives such as quinones as illustrated below.1 Alternatively, allyl to trans-propenyl isomerization can be purposely effected using Grubbs second-generation catalyst in MeOH at elevated temperatures (~60 °C).2 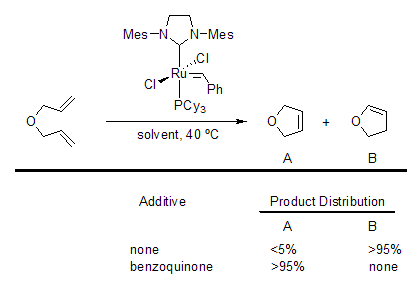 Removal of Ru Metal from Metathesis Reaction MixturesA problem inherent to most metathesis reactions employing ruthenium carbenes is the effective removal of ruthenium impurities upon completion of the reaction. In addition to catalyst re-design,1 a variety of methods2 have been used to scavenge ruthenium species, including the use of: water-soluble phosphines,3 oxidizing agents (such as triphenylphosphine oxide,4 DMSO,4 or lead tetraacetate5), mesoporous silicates,6 polar isocyanides,7 and activated carbon.8