The asymmetric allylation of carbonyl compounds remains one of the most important and fundamental addition reactions for the synthesis of optically active chiral building blocks. Prof. James L. Leighton from Columbia University has developed a powerful method making use of silicon in constrained five-membered ring systems benefiting of an increased reactivity. These five-membered silacycles consisting of allylsilanes and a simple chiral 1,2-diol, diamine or aminoalcohol showed profound practical implications acting as chiral silicon-based Lewis acids in allylation reactions.

In 2002, Leighton and co-workers developed strained silacycle compounds as versatile reagents for the practical enantioselective allylation of aldehydes.1

A newly developed chiral auxiliary based on the cyclohexane-1,2-diamine scaffold successfully allylated a broad range of aldehydes highly enantioselectively.2 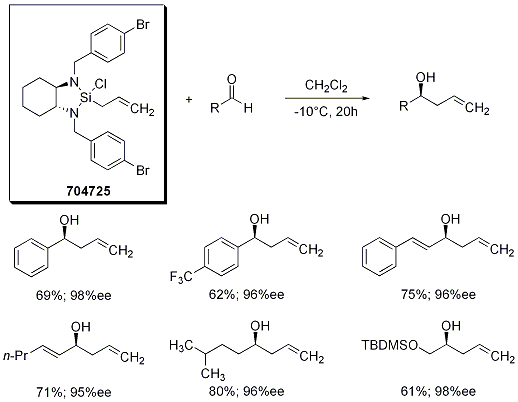 The development of practical enantioselective syntheses of chiral amines is of great importance to synthetic organic and medicinal chemists. In 2003, Leighton and co-workers successfully used a pseudoephedrine-derived, five-membered-ring, strained silacycle reagent for the enantioselective allylation of acylhydrazones.3

The reaction scope of these silacycles was extended to a practical method for the enantioselective synthesis of tertiary carbinamines based on the addition of this chiral allylsilane reagent to a structurally diverse array of ketone-derived benzoylhydrazones.4 While many methods for the synthesis of quaternary α-amino acids have been published, far fewer reports have dealt with the synthesis of tertiary carbinamines. The free amines are easily accessed in good yields by subjecting the different hydrazones to reduction with SmI2 .

Addition of electron-rich arenes to glyoxylate-derived imines, in an overall Friedel-Crafts-like alkylation reaction, provides access to valuable arylglycine derivatives. Silacycle smoothly promotes the additions of anilines to the benzoylhydrazone of isopropyl glyoxylate.

A variety of aliphatic and aromatic aldehyde-derived benzoylhydrazones may be reacted with tert-butyl vinyl ether to give pyrazolidines with excellent levels of enantioselectivity. This reaction was easily carried out on a larger scale (5g of hydrazone) to demonstrate the true practicality and scalability of this method.