University of Warwick Department of Chemistry

Emergence of living radical polymerization mediated by transition metal catalysts in 1995 was a seminal piece of work in the field of synthetic polymer chemistry.1-3 Since this date, many transition metal complexes have been shown to be effective with many different ligands and transition metals. One is left with a number of dilemmas:

As with all effective types of transition metal catalytic processes, the chemistry works due to facile interchange of the oxidation states of the metal, which is controlled by the ligands on the metal.2 Although the exact mechanism of atom transfer radical polymerization (ATRP) is complex, and more than likely depends on the different ligands employed, it can be simplified to a reversible redox system, whereby the transition metal undergoes a reversible one electron oxidation and reduction process, as shown in Figure 1.

Even though many different complexes have been shown to be effective in ATRP, by far the most commonly used chemistry involves copper(I) complexes based on a range of N-donor ligands.2 The role of these ligands is often described as controlling the solubility of copper(I). Those who have carried out ATRP with an aliphatic amine ligand or bipyridine will know these reactions are quite often heterogeneous and in some cases there is a considerable amount of insoluble material in the reaction flask. However, even though the solubility of the catalyst is very important, the role of the ligand is critical. If the reaction equilibrium lies too far to the left the alkyl halide will be stable and unable to participate in polymerization. Conversely, if the equilibrium is pushed too far to the right, then a high concentration of free radicals will lead to conventional free radical polymerization with termination by normal radical-radical coupling, and in some cases disproportionation. The relative stability of copper(I) and copper(II) complexes control the position of this equilibrium and thus the electronic, and often the steric, nature of the ligands in turn allows the synthetic chemist to control the reaction. Copper(II) is usually more stable than copper(I). Copper(II) is d9 which gives rise to characteristic blue and green complexes.

Note what happens when copper(0) (d10 s1) is left exposed to air on a copper roof or in a bronze statue—it oxidizes to a pale green copper(II). Copper(I) is d10 with no readily available d-d transition and thus its compounds are generally colorless, unless there is metal-ligand charge transfer available. The practitioner of ATRP knows very well that even if they purchase 99.999% pure Cu(I)Br from a commercial source it will come as a pale green powder, due to trace oxidation to copper(II) bromide. Also, during the course of a polymerization utilizing an alkyl amine ligand [e.g., TREN (Product No. 225630), Me6TREN (Product No. 723142), PMDETA (Product No. 369497)] the solution will often be a blue/green color. Since the resulting polymer normally has the desired Mn and narrow PDI, this is often overlooked as the reactions are undoubtedly very successful. However, it is indicative of a build up of copper(II) complexes during the reaction. The second most important part of the equilibrium is the stability of the polymer radical, which changes depending on the electronic and steric environment. For example, in a comparison between a propagating methacrylate and acrylate polymer radicals, the methacrylate has an electron-donating methyl group that also introduces steric effects; these effects are most documented for large differences in propagating rate constants, kp.

Alkyl pyridylmethanimine ligands were first used in 19964-11 as work showed that these ligands readily form tetrahedral copper(I) complexes which are unusually stable with regards to oxidation.12,13 The ligands are very simply prepared by a condensation reaction exemplified by the following procedure; 2-pyridine carboxaldehyde (20 mL, 0.21 mol) and diethyl ether (20 mL) are added to a flask containing dried magnesium sulfate (5 g). The flask is cooled to 0 °C and n-propylamine (19 mL, 0.25 moles) added slowly. The mixture is removed from the ice bath and stirred for two hours at 25 °C prior to filtration. Diethyl ether is removed by rotary evaporation and the resulting yellow oil purified by vacuum distillation. The product is obtained as a straw-colored oil (bp. 43 oC at 7 × 10-2 mbar), with a 98% yield (Figure 2). The reaction occurs very rapidly under these conditions and a point to note is that the resulting Schiff bases are very stable towards hydrolysis even though the alkyl groups have a primary carbon in the imine. This is contrary to many organic text books that often state secondary or tertiary carbons are required to prevent the reverse reaction. Note that in order to prepare the methyl ligand, a 40% solution of methylamine in water (Product No. 426466) is needed for the reaction to proceed rapidly to completion. This unexpected behavior led us for many months to avoid primary amines, and the use of secondary and tertiary amines leads to ligands that give relatively broad PDI polymers.

Figure 2. Schematic of the synthesis of alkyl pyridylmethanimine

The alkyl pyridylmethanimine ligands have a very low lying π* orbital which readily accepts electron density from the copper(I).13 The implication of this is that when copper(I) is complexed with two alkyl pyridylmethanimine ligands, although the formal oxidation state of copper is +1, in reality this is not the real oxidation state, or electron content of the metal. In addition, the tetrahedral arrangement of the ligand (Figure 3) shows that the access to the metal is restricted due to the steric bulk of the ligands.14-15 The combination of these effects is to stabilize copper(I) towards oxidation such that it is even possible to bubble air through a solution without causing oxidation. 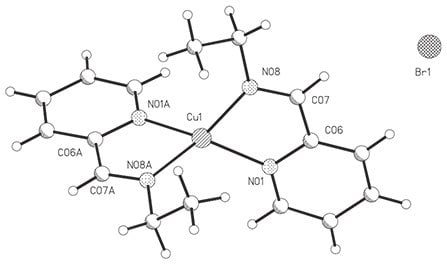 In addition to the ligands complexing in a tetrahedral way during polymerization, the monomer can act as a competing ligand (Figure 4). This will occur for all methacrylates and acrylates, which inherently contain good coordinating groups. This is most profound with tertiary amine-containing ligands which result in competitive binding that can be observed by a small change in reactivity ratios when compared to free radical polymerization values.

It must be remembered that the copper complex formed with all ligand types is always a salt with the transition metal complex forming the cation. This can produce a solubility problem in non-polar solvents. Alkyl pyridylmethanimine ligands help circumvent this by allowing for a facile change in the alkyl group. As the alkyl chain is lengthened, the solubility in non-polar solvents increases. For non-polar monomers such as long chain acrylates and styrene, longer chain ligands need to be used (n-butyl, n-pentyl, n-octyl). However, for polar monomers, it is desirable to use the smallest alkyl chain possible for atom economy, and purification reasons. An interesting, but very useful consequence of this solubility is that during polymerization at high solids the polarity of the reaction medium will decrease markedly. Thus, during the polymerization of methyl methacrylate (MMA) at 30-50% solids the polarity decreases and often the catalyst will precipitate from solution, generally as a highly colored oil throughout. This can be avoided by the use of a more non-polar ligand with a longer alkyl group.

However, this potential problem can also have a positive effect with regards to catalyst removal, which can be cited as an unfortunate aspect of ATRP. The solubility of these ligands decreases as the polymerization progresses and upon lowering the temperature from reaction temperature (typically 60-80 °C) to ambient. This can result in almost complete precipitation of the catalyst as sticky oil which adheres to the reactor, allowing the catalyst to be removed via trituration/decanting. Alternatively, the reaction mixture can be filtered through a small column/ pad of fine filter agents such as Celite®, basic alumina, basic silica which remove the particulate catalyst, ligand and complex, since they adhere to the medium. It is noted that care needs to be taken with certain polymers which might also complex with the filtration medium.

Polymerization is typically carried out under an inert atmosphere with reagents being freeze, pump, thaw degassed. However, on scale-up it is acceptable to bubble nitrogen through the reagents for 15-30 minutes or to heat under nitrogen; 100 kg of MMA has been polymerized effectively in this way.

• Up to 66 weight % solids
• Range of solvents from water and alcohols to toluene and cyclic ethers
• 60-80 °C
• Inert atmosphere, usually nitrogen
• Robust to many different types of functional group19-21

The family of N-alkyl-2-pyridylmethanimines offers an alternative to aliphatic amine ligands and bipyridine for copper(I)-mediated living radical polymerization or ATRP. They yield very stable copper(I) which allows for excellent polymerization of most methacrylate monomers in polar and non-polar solvents. There is little evidence of oxidation or disproportionation even with the most polar monomers and in the most polar solvents16-17 which is often the case for the aliphatic amine type ligands.18 Preparation of the ligands and their use in methacrylate polymerization is facile. Typically more than 80% of researchers will achieve polymers with PDI <1.20.