The development of original and versatile reagents in modern organic synthesis is of crucial importance for the design of new chemical transformations that enable the fast and efficient assembly of a variety of complex molecules. In this context, nitrogen-substituted alkynes, commonly named “ynamides,” certainly represent one of the most versatile classes of alkynes and are especially appealing candidates for the design of innovative chemical transformations. In collaboration with Professor Gwilherm Evano, we are pleased to offer a collection of ynamides (805572, 805580, 805599, 805602). Ynamides have recently emerged as key building blocks in organic synthesis, as exemplified by the ever-increasing number of new and original processes based on the peculiar chemistry of ynamides that have been reported during the last decade, usually proceeding with almost surgical precision.1,2,3 The electron-donating ability of the nitrogen atom strongly polarizes the triple bond, allowing for transformations to proceed with levels of chemo-, regio-, and stereo-selectivities that cannot be reached with classical alkynes. Unlike ynamines, the high reactivity of ynamides is yet tempered by the presence of an electron-withdrawing group on the nitrogen which can, as an added bonus, also act as an efficient directing group, chiral auxiliary, or even participate in the reaction. Ynamides are therefore extremely versatile reagents which can notably be used for the generation of highly reactive and otherwise inaccessible intermediates and for the inclusion of nitrogen-based functionalities into organic molecules. Their use as starting materials for the elaboration of nitrogen-containing heterocycles had a dramatic impact in heterocyclic chemistry and resulted in the emergence of new paradigms.4 Interestingly, they are now starting to be used in natural product synthesis where the use of ynamides allows for unprecedented and original bond disconnections and net shortcuts in synthetic routes5 as well as in medicinal chemistry. Selected examples shown below are representative of intermediates, molecular scaffolds, and natural/biologically relevant products that can now be accessed from ynamides. 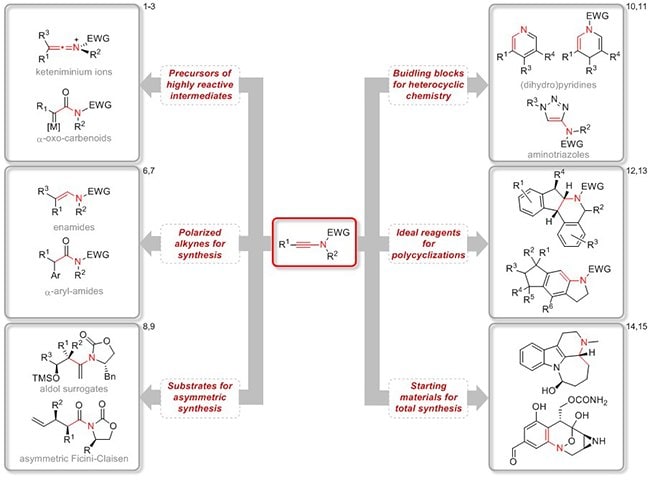 Selected representative applications of the use of ynamides in chemical synthesis are shown below.

2. The use of chiral ynamides in asymmetric synthesis, which notably brought a general solution to the long-standing problem of the synthesis of aldol products possessing a quaternary stereocenter18

3. An example of the use of ynamides as precursors of highly reactive keteniminium ion which initiates a polycyclization yielding to complex nitrogen heterocycles12

Special thanks to Cédric Theunissen, Morgan Lecomte, and Professor Gwilherm Evano for contributing this technology spotlight!