This large group plays an important and varied role in human health.

Lactobacilli [sing: lactobacillus] are a rod-shaped, Gram-positive, fermentative, facultative anaerobic or microaerophilic organotrophs. Normally, they form straight rods but under certain conditions spiral or coccobacillary forms have been observed. In most cases they form chains of varying length. Lactobacilli belong to the lactic acid bacteria and comprise the major part of this group. As their name implies, they produce lactic acid and derive energy from the fermentation of lactose, glucose and other sugars to lactate via homofermentative metabolism. About 85-90% of the sugar utilized in the fermentative process is converted to lactic acid. However, there are some heterofermentative lactobacilli that produce alcohol in addition to lactic acid from sugars. This acid-producing mechanism inhibits growth of other organisms and favours the growth of lactobacilli that thrive in low pH environments. ATP is generated during the process by non-oxidative substrate-level phoshorylation. 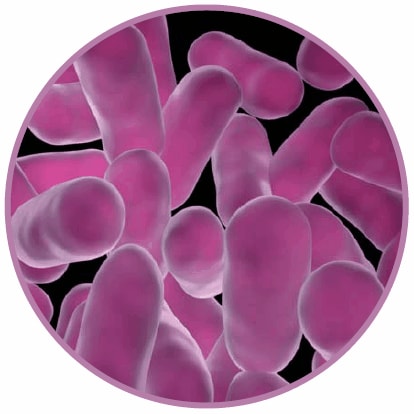 Lactobacillus Species Can be Divided into Three Groups According Their Metabolism (According Kandler and Weiss):

Lactobacilli have a generation time ranging from 25 to several hundred minutes. The optimal growth temperature ranges from 30 to 40 °C, although some thermophilic strains grow well and have highly activated metabolism at temperatures around 45 °C.

Lactobacilli are ubiquitous and normally harmless. In humans and animals, they are found in the intestinal tract and perform many beneficial functions, including immunomodulation, suppression of enteric pathogens and maintenance of intestinal flora. On the negative side, Lactobacilli decompose plant material and are responsible for spoiling vegetables, fruits, beverage and other nutrients. L. casei and L. brevis are two of the most common beer-spoilage organisms.

Certain lactobacilli like Lactobacillus delbrueckii are known to cause urinary tract infections.(2)

Life without Lactobacilli is unimaginable: They are used in the production of yoghurt, cheese, chocolate, sourdough bread, sauerkraut, pickles, kimchi (a traditional Korean pickled dish), beer, wine, cider and many other fermented foods. Lactobacilli are also important in animal feed (silage) production. They produce lactic acid, lower the pH and thereby inhibit growth of bacteria.

Many studies have shown the beneficial effect of a healthy intestinal Lactobacilli-containing microflora. Their potential therapeutic roles include anti-inflammatory, anti-cancer, and boosting the immune system, among other benefits. As a result, Lactobacilli are often added to foods as a probiotic supplement.

Identification of Lactobacilli and Bifidobacteria

Selective media is widely used to differentiate lactobacilli based on their phenotype. Classical phenotypic tests for identification of lactobacilli are based on physiological characteristics, like motility, growth temperature, respiratory type and growth in sodium chloride, as well as on diverse biochemical characteristics, such as fermentation type, metabolism of carbohydrate substrates, production of lactic acid isomers, coagulation of milk and presence of specific enzymes like arginine dihydrolase. In Bergey’s Manual, Lactobacillus is described as a Gram-positive rod, non-spore forming, acid fast negative and catalase negative. The colony morphology on certain media is taken for the presumptive identification. There are also three API tests (API 50 CH, LRA Zym and API Zym) for the identification, but the reliability of these tests has been questioned (1). Another interesting method is the protein fingerprint, where an SDS gel electrophoresis is made of the whole bacteria cell.

As modern alternative, molecular biology-based methods, like PCR, can be consulted. However, they are often quite expensive. Sigma-Aldrich provides a revolutionary molecular biology method that is rapid, easy and cost effective. Based on the detection of rRNA, this method completely avoids the needs for PCR amplification. The sandwich hybridisation test, called HybriScan, is performed on a microtiter plate. The range of Lactobacilli detected by HybriScan tests is listed in Table 1.

More information about the test and the technical principles behind it are found on our web site sigma-aldrich.com/ hybriscan.