Epigenome editing is a tool in which the DNA or histone is modified at specific sites in the genome using engineered molecules. This strategy requires precise targeting which is accomplished through the use of nuclease-deficient Cas9 (dCas9). However, unlike genome editing, epigenome editing does not affect genome DNA sequence.

The dCas9-p300 CRISPR Gene Activator system is based on a fusion of dCas9 to the catalytic histone acetyltransferase (HAT) core domain of the human E1A-associated protein p300. This approach has been independently validated by the Gersbach lab (Duke University) to activate genes at both proximal and distal locations relative the transcriptional start site (TSS). The dCas9-p300 histone acetylation approach represents a distinct mechanism of action relative to dCas9-VP64 or other similar gene activation motifs. While activation domains, such as VP64, help recruit transcription complexes to the promoter region, they are at the mercy of the epigenetic state of the gene and dependent on the availability of additional transcriptional proteins. Conversely, the p300 histone acetyltransferase protein opens a transcriptional highway by releasing the DNA from its heterochromatin state and allowing for continued and robust gene expression by the endogenous cellular machinery. 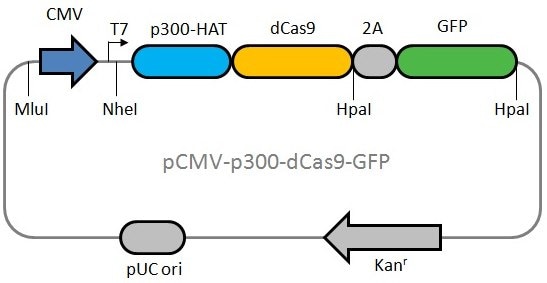 Above is a map for the plasmid which expresses the dCas9p300 fusion protein. This plasmid also co-expresses GFP from the same transcript as dCas9p300 to easily monitor delivery and expression in your target cell type. The dCas9p300 plasmid can be co-transfected with custom-made U6-gRNA plasmids to target activation near transcription start sites or other regulatory locations. An Oct4 control plasmid is available (CRISPR17-1EA) which can be used to help establish the dCas9p300 approach in your laboratory. This Oct4 control has been shown to work in HEK293 cells (Figure below). We recommend testing the Oct4 control in HEK293 cells alongside any new cell type you wish to try. 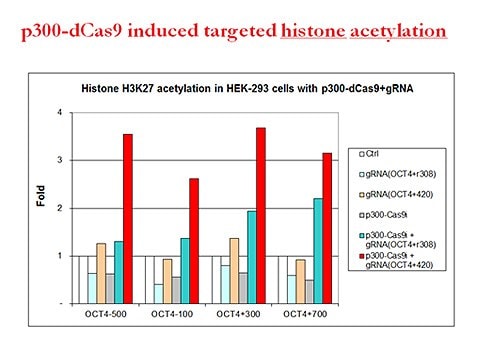