MicroRNAs (miRNAs) are an endogenous class of RNA molecules comprising 19-25 nucleotides that regulate the suitability or transflational efficiency of mRNAs. The mature miRNAs are processed from longer hairpin transcripts by the sequential action of the RNases Drosha1 and Dicer2,3. The occurance of miRNAs includes eukaryotic organisms from plants and animals4.

Based on complementary analyses of miRNAs to mRNA sequences in data bases, it has been estimated that each vertebrate miRNA targets ~200 mRNA molecules in average, suggesting that ~30% of the human genes may be post-translationally controlled by miRNAs5,6.

An increasing number of publications describe the participation of miRNAs in a variety of different regulation mechanisms such as cell growth, development, differentiation, and apoptosis7. They are involved in cancerogenic processes: miRNAs are frequently located in cancer-associated genomic regions, and altered miRNA expression patterns have been described in many human cancers8-10.

In a second experiemtn, a higher concentrated transfection complex consisting of 0.8ul X-tremeGENE™ siRNA Transfection Reagent and 11 pmoles of antisense LNA oligonucleotide against h-mir 204 was tested.

The occurenc of activated cysteinyl-aspartic-acid proteass (caspases) marks an early step of apoptosis. The Homogeneous Caspase Assay contains a fluorogenic peptide substrate that releases a fluorescent group depending on caspase activity in the samples. The caspasr assay was performed 72 hours after transfection, and the total caspase was measured according to the supplier’s instructions. The cells were trypsinized and washed in PBS buffer before they were lysed and the protease substrate was added.

Cell proliferation was measured 3 days fter transfection using the Cell Proliferation Reagent WST-1. WST-1 is a tetrazolium salt that is converted to a strongly colored compound by metabolically active cells. The extent of color formation directly correlates with metabolic activity. An amount of WST-1 equaling 10% of the volume in the well was added and incubated for 1 hour. Absorbance was then measured at 437nm against medium (reference wavelength 690nm). The cells in the same wells were then counted under the microscope. 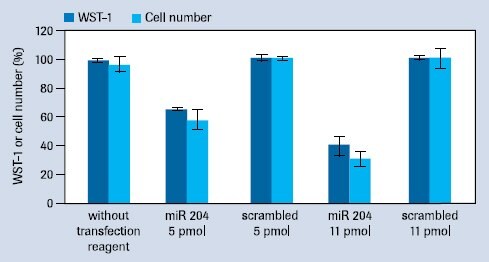 Figure 3. Proliferation rates of HeLa cells transfected with different amounts of antisense oligonucleotides against miRNAs 204 as measured with the Cell Proliferation Reagent WST-1. 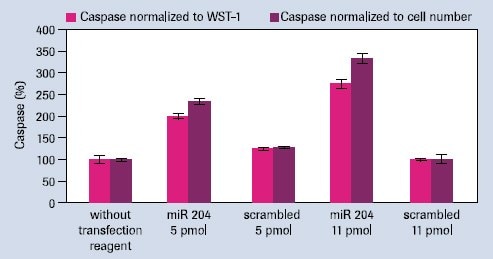 Figure 4. Caspase activity of HeLa cells transfected with different amounts of antisense oligonucleotides against miRNAs 204 as measured with the Homogeneous Caspase Assay. 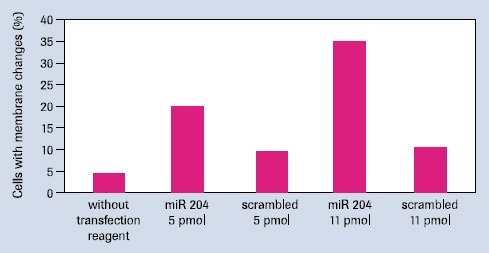 Caspase activity of the transfected cells was tested using the Homogeneous Caspase Assay. The obtained values were normalized to the WST-1 values to compensate for the difference in cell numbers The results can be seen in Figure 2, While the miRCURY Knockdown probes against h-mir 214, h-mir 218 and h-mir 21 do not influence the caspase levels, the caspase activity is increased after treatment with antisense inhibitors against h-mir 7 and h-mir 204. This indicates that these miRNA species prevent the HeLa cells from entering apoptosis, and a knockdown of these miRNAs starts apoptotic events like the activation of caspases.

To further analyze this effect, we repeated the experiment with the miRCURY Knockdown probes against h-mir 204 under two different concentrations of transfection complex. Again, we observed a strong effect on the cell proliferation rate and the total cell number (figure 3). The cell number correlated well with the proliferation rate as measured with the WST-1 assay. Under the higher concentration, the total cell number was less than half that of the controls (untransfected cell or cells transfected with scrambled oligonucleotides). Again, a high increase of caspase activity was seen with these knockdown probes reaching more than threefold elevated levels at the highest concentration (figure 4).

We also analyzed the transfectants for exposure of phosphatidylserine on the cell surface, a later apoptotic step. This was measured with a fluorescein-labeled Annexin V, a protein binding to the phosphatidylserine residues. Up to 35% of the cells displayed membrane changes (figure 5). This finding supports the view that h-mimr 204 is involved in regulating proliferation in HeLa cells and preventing the cell line from entering into apoptosis.

The recently discovered miRNAs have added a new level of known regulatory competents and thereby changed our view of gene regulation. It is of general interest to manipulate the levels of miRNAs in different cell types in order to elucidate their biological function. We have demonstrated that the X-tremeGENE™ siRNA Transfection Reagent is an excellent tool for transpoprting antisense molecules into the cell lines. The LNA-enhanced miRCURY Knockdown probes were actcive at very low concentrations and did not exhibit significant toxic side effects, indicating a very specific target recognition. By combining the technologies mentioned above, we have been able to demonstrate the role of different miRNAs in the proliferation of HeLa cells.

For life science research use only.
Not for use in diagnostic procedures.