Genomic characterization has become the starting point for understanding biological systems. In many instances, this process is hampered by insufficient quantities of genomic DNA, especially for rare and archived samples. The GenomePlex® Whole Genome Amplification (WGA) Kit allows for a rapid and highly representative, up to 1000 fold amplification of genomic DNA from trace samples. This system utilizes a proprietary amplification process in which genomic DNA is subjected to random chemical fragmentation followed by a series of stepped, isothermal primer extensions to convert the resulting DNA fragments into an amplifiable library, the OmniPlex® Library. The OmniPlex Library is then subjected to traditional amplification using universal primers and a limited number of cycles. To meet the high-throughput requirements for amplification of genomic DNA samples, an automated method has been developed using the Biomek® FX workstation. The entire process from genomic DNA fragmentation, OmniPlex Library generation, and amplification are automated in a single method resulting in highly consistent amplifications across 96 samples. This method has been successfully applied to a variety of sources including whole blood, blood cards, and formalin fixed, paraffinembedded (FFPE) tissue.

OmniPlex Library Amplification
The concentrations of purified genomic DNA samples were determined by measuring absorbance. A total of 10 ng genomic DNA was aliquoted into each well of a 96-well PCR amplification plate. The Beckman Biomek® FX Liquid Handling Workstation was used to set up the amplification reactions. Cycling was performed in a GeneAmp® PCR System 9700 (Applied Biosystems, Foster City, CA).

Agarose Gel Analysis
6 μL of each amplified product was analyzed on a 1% agarose gel. 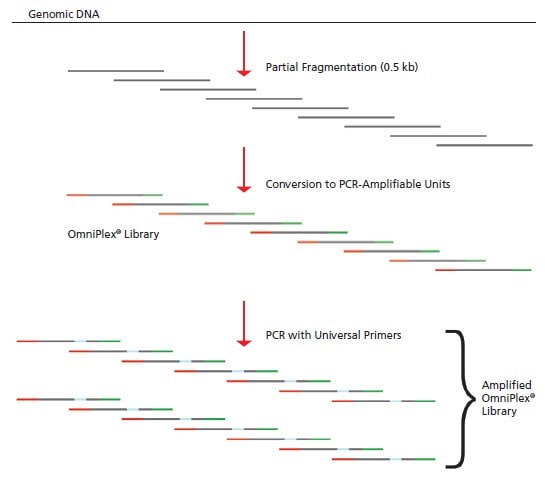 Figure 1.GenomePlex WGA begins with the random, non-enzymatic fragmentation of the genome followed by the conversion of these fragments into PCR-amplifiable units fl anked by universal adaptor sequences. This library of fragments (the OmniPlex library) is then subjected to a limited number of PCR cycles to generate sufficient material for subsequent use in a variety of downstream applications. 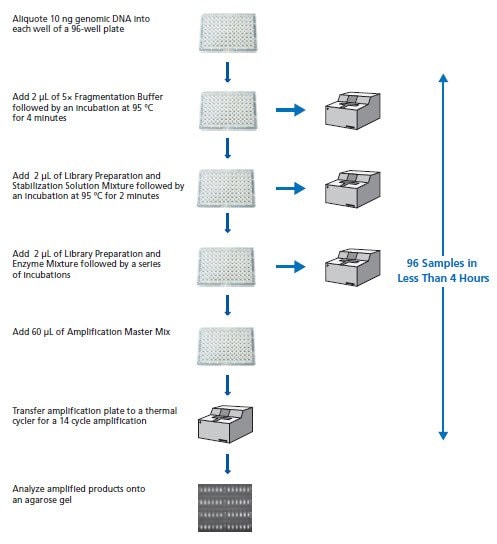 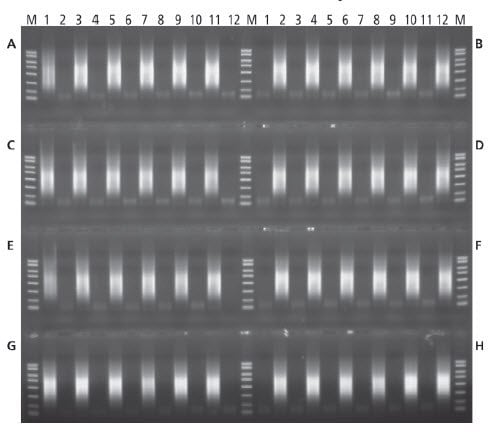 Figure 3.An aliquot of 10 ng of human genomic DNA samples or 8 μL of water were placed in alternating wells of an amplification plate. The 96-well plate was processed using the automated WGA procedure on the Biomek FX workstation. All samples were then subjected to amplification and 6 μL of the resultant products were electrophoresed on a 1% agarose gel. Amplified products were not detected in wells without DNA samples. M: PCR marker. 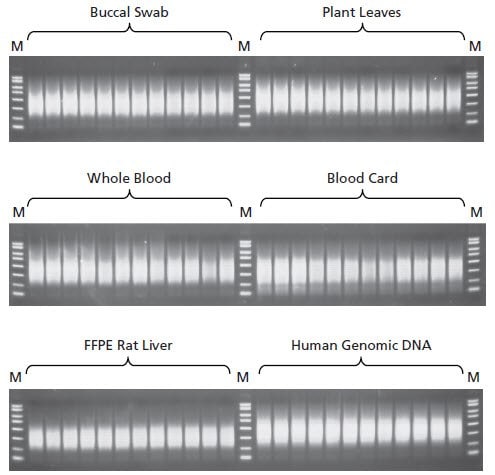