There has been considerable discussion about the Hydrogen Economy and its promise of cars and trucks with clean burning internal combustion engines and highly-efficient fuel cells. California,1–3 Iceland4–6 and Norway7–9 have all made commitments to Hydrogen Highways where hydrogen fueling stations will be available for the cars of tomorrow.

Unlike gasoline, hydrogen is abundant in the universe and can be generated from renewable sources of energy. However, hydrogen is the lightest element in the universe and has a low density, which makes it difficult to store and transport without bulky, heavy equipment. This is why the storage and transportation of hydrogen has been identified as the biggest challenge to establishing the Hydrogen Economy.

A number of key issues must be addressed to make this future a reality: sources of inexpensive hydrogen must be found, fuel cell technology must advance in capability and decrease in cost, and methods must be developed to efficiently store and transport hydrogen. Currently available methods for storing and delivering hydrogen fuel include compressed hydrogen, liquefied hydrogen, physical metal hydride storage, chemical hydride storage,10–11 nanotube storage,12–13 among others. Compressed and liquefied storage are primarily limited by costs. Methods needed to compress the hydrogen, as well as the large heavy tanks required to store the compressed/ liquefied hydrogen add significantly to the cost. Additionally, these tanks pose a risk of explosion when positioned on-board of a moving vehicle. Hydride storage in metal hydrides is promising, but current methods are still expensive and heavy.14

Another alternative is to store hydrogen covalently in organic molecules. The advantage of storing hydrogen covalently as part of a molecule in comparison with physical trapping of hydrogen gas in a substrate is that the system does not require compression or cryogenic temperatures. An ideal solution would be the development of a liquid carrier. Such a liquid carrier for hydrogen would minimize the need for infrastructure changes, and eliminate the need for large, specialized storage containers. Furthermore, the world is accustomed to dealing with liquid fuel so adopting a new type of liquid fuel would be much easier than making major infrastructure and societal changes within the fuel industry.

*This paper addresses a new promising alternative for hydrogen storage and transportation: hydrogen stored covalently in an organic liquid carrier and released by interaction with a heated catalyst.

*Others have proposed using carbazoles15 for hydrogen storage in organic molecules.

A Liquid Fuel for Hydrogen Storage

Asemblon, Inc. has developed a proprietary system for storing hydrogen. Asemblon’s first United States patent will issue shortly. The Asemblon System consists of four components which are outlined in Figure 1:

Figure 1.HYDRNOL™, along with the Hydrogen Release and Hydrogenation Modules, use patent-protected processes that are at the heart of the Asemblon System.

HYDRNOL™ is a hydrocarbon based organic molecule that is liquid at ambient temperature and atmospheric pressure. It can be distributed utilizing the established infrastructure of pipelines, barges, tankers and trucks. The molecule can be stored and pumped at traditional gasoline filling stations with minor modifications.

This fuel can be made from a variety of initial feed stocks including sweet and sour crude oil, and alcohols, including ethanol from biomass. Ethanol could be a primary source of this fuel with an estimated increase of only 10% to the cost of an ethanol production facility.

After releasing its hydrogen the spent fuel can be recycled by rehydrogenation back to the original molecule. During use, this fuel is kept in a dual-bladder gas tank either on-board of a vehicle or at a stationary site.

Inside the Hydrogen Release Module (HRM), the fuel comes in contact with a hot, high surface area catalyst and instantly releases hydrogen from the fuel and produces the dehydrogenated organic liquid (DOL). The key to success in the HRM is the high surface area and stability of the catalyst. Asemblon has discovered and patented the right catalyst for this operation. To achieve the high surface area, Asemblon has developed several prototypes of hydrogen release units consisting of microchannels, packed bed made out of embedded nano-size catalysts on porous substrates and nanosprings. Figure 2 shows one of these modules. 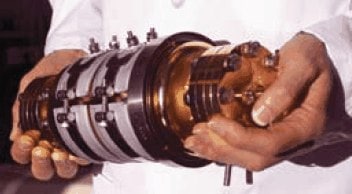 After the release of hydrogen, the DOL and hydrogen go into a spent fuel recovery module. Hydrogen gas and DOL are easily separated by their physical properties. If necessary, the hydrogen gas can be passed through a membrane for further purification. The separated hydrogen can then be directed to power internal combustion engines, turbines or fuel cells. The DOL from the spent fuel recovery module is directed to the dual-bladder gas tank where it is stored until it can be removed and transported to a remote site for catalytic hydrogenation.

In the hydrogenation module, hydrogen is added to DOL to regenerate the original fuel. The art and chemistry of catalytic hydrogenation is well known. Asemblon is working with the experts in this field to find the best catalyst and its optimum condition to re-hydrogenate at high yield.

A “Well-to-Wheels” estimate for Asemblon’s system is shown in Figure 3. This “Well-to-Wheels” estimate was done by considering the major energy inputs and outputs for HYDRNOL™ fuel from creation to use. The data in Figure 3 assume the hydrogen will be used in an internal combustion engine and shows an overall efficiency of 25%. This is significantly higher than the estimated efficiency of gasoline (14%).16 If a fuel cell were used the efficiency would increase even more.17 The graphs in Figure 4 compare four technologies for on-board vehicle storage of hydrogen. HYDRNOL™ compares favorably with compressed hydrogen, liquid hydrogen and hydrogen stored in metal hydrides on the basis of volume, weight and cost.

Not included in the cost factors are the much higher infrastructure costs associated with transporting and storing compressed and liquid hydrogen. Liquid hydrogen fueling is considered to be potentially dangerous, so expensive filling robots have been designed to eliminate the need for the consumer to fill the vehicle.

Generating hydrogen by steam methane reforming is relatively inexpensive. One kilogram of hydrogen currently costs $1.20. The same 1 kg of H2 is equivalent to 1 gallon of gasoline. The cost to store and transport hydrogen more than triples its cost. Using HYDRNOL™ Fuel, 1 kg of hydrogen can be delivered for $2.50; comparable to gasoline (Figure 5).

The ability to store and transport hydrogen within a liquid carrier at standard temperatures and pressures provides many advantages over current hydrogen storage methods. The need for large, heavy storage tanks is eliminated. Major changes in the fueling infrastructure of the world are avoided. The risk for explosion is minimized since the hydrogen is stored within a molecule and not in its elemental form. HYDRNOL™ is such a liquid fuel. Due to the favorable properties, HYDRNOL™ presents opportunities not only in the transportation energy market, but also in stationary power generation and storage. The further development of HYDRNOL™ promises to revolutionize the future of energy storage, transportation and use.

HYDRNOL™ as a carrier for hydrogen presents many advantages including: