An initial report on the ability of alloys and intermetallics to form compounds with hydrogen dates back to 1958, when Libowitz1 showed that ZrNi easily and reversibly reacts with hydrogen forming ZrNiH3. However, the birth of a new field, chemistry of intermetallic hydrides, is usually considered to be coincident with the discovery a decade later of hydrideforming compounds such as SmCo5 2 and other rare earth AB5 3 and AB2 4 intermetallics. 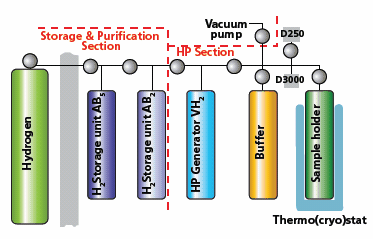 The unit consists of a section for preliminary hydrogen purification and the high-pressure (HP) section. The preliminary purification section consists of a hydrogen source vessel and two hydrogen storage and purification units—one filled with an AB5-type alloy (LaNi5, Product No. 685933) and the second containing an AB2-type alloy ((Ti,Zr)(V,Mn)2, Product No. 685941). This configuration prevents possible contamination of the HP generator system, containing vanadium hydride (VH2), by impurities in hydrogen, which may poison the surface of VH2, reduce its absorption capacity and, consequently, hamper its performance. The HP section consists of the HP-generator system containing VH2, a sample holder, a buffer vessel, and two pressure transducers (Product No. D250 and D3000) with upper pressure limits of 250 and 3000 atm. Both the sample holder and the HP generator can be heated to high temperatures (up to 573 K) using muffle furnaces. The experimental temperature around the sample holder can also be maintained with a thermostat operating in the temperature range from 243K to 333 K. The data from pressure transducers and from thermocouples attached to the sample holder and the HP generator are collected by a computercontrolled data acquisition system. To perform correct hydrogen absorption and desorption calculations, we determined the volumes of all constituent parts of the system. These volumes were obtained in two ways—by calculations based on blueprint dimensions and by volumetric measurements after filling with water. The volume of the sample holder was 8.929 mL. While calculating the total volume of the sample holder, the volume of the alloys and the relevant hydride were also taken into account. A typical sample size during our experiments varied between 15 and 20 g. The amounts of absorbed or desorbed hydrogen were calculated using a modified Van der Waals equation:5

A number of authors7–9 compared hydrogen absorption properties of YNi5 to other AB5 alloys and concluded that peculiarities in its interaction with hydrogen can be explained neither by the low-temperature heat capacity nor the electronic structure, nor by the surface oxidation of YNi5. In our opinion, the most possible explanation was given in reference, 8 where it was shown that among all binary AB5-type intermetallic compounds YNi5 has the lowest compressibility. Thus, the low volume of the YNi5 unit cell could influence hydrogen absorption properties.