Lithium-ion batteries (LIBs) have been considered the most promising energy storage devices due to their relatively higher energy density.1,2 LIBs find many uses in a variety of applications, such as portable electronics, electric and hybrid electric vehicles, and stationary energy storage systems, as well as others. Compared with LIBs, sodium-ion batteries have recently attracted much attention as an alternative to LIBs for electric energy storage applications owing to the low cost and abundant sodium resources.3 Aluminum ion batteries are promising alternatives due to their advantages of low cost, nontoxic nature, and earth abundance as well as the three electron redox couples that provide a competitive storage capacity compared to the single-electron, lithium-ion storage.4,5 The traditional LIBs with organic liquid electrolytes have some drawbacks such as safety issues and low-energy density. However, solid-state Li batteries are expected to use metallic Li anodes due to the use of non-flammable solid electrolytes, which enable a significant increase in energy density. The introduction of metal anodes makes solid-state batteries (SSBs) promising for next-generation high energy density batteries. Particularly, lithium metal has a high theoretical specific capacity (3860 mAh g-1), low-density (0.53 g cm-3), and the lowest electrochemical potential (~3.04 V vs. standard hydrogen electrode (SHE)). Compared to liquid electrolyte-based Li-ion batteries, SSBs are believed to be safer, have longer life cycles, higher energy density, and fewer packaging requirements.6–12 Therefore, SSBs have received considerable attention during the last decades. In this short review, we briefly describe the advances in solidstate Li, Na, and Al batteries as well as the existing challenges while also proposing several possible research directions for circumventing the challenges.

where σi denotes ionic conductivity, A represents the preexponential factor, T signifies the absolute temperature (in kelvins), Ea is the activation energy, and k is the Boltzmann constant. To calculate the mobility of the charge carrier, use Equation 2:

In this equation, q represents the carrier charge, D denotes the diffusion coefficient of metal ions, k is the Boltzmann constant, and T is the absolute temperature.13 The motion of a single particle jumping from an occupied site to an adjacent energetically equivalent unoccupied site may be described by a random-walk theory.14 The relationship between the conductivity and the diffusion coefficient follows the Nernest–Einstein Equation (Equation 3):

where Nc is the number of mobile ions. The ionic conductivity is proportional to the Nc and D. For polymer electrolytes, the ionic conductivity usually follows the Arrhenius or Vogel–Tammann–Fulcher (VTF) equations or both of them together.15 Usually, the VTF behavior seems more suitable for the solid polymer electrolytes, as described by Equation 4

where B is the pseudo-activation energy of the conductivity, and T0 is the reference temperature, which falls typically 10–50 K below the glass transition temperature (Tg). The ionic motion behavior correlates with the long-range motions of the polymer segments. Effective media theories describe the conductivity of composite electrolyte materials consisting of a conducting and an insulating phase.16

Figure 1 schematically shows the structure of an all-solidstate battery. The battery consists of a cathode, a solid electrolyte (Mn+ ion conductors, M=Li, Na, Al), an anode, and current collectors. The solid electrolyte serves as both an ionic conductor and separator in the SSBs. The electrodes are attached to both sides of the electrolyte. Solid-state batteries need fewer requirements on packaging and thus may reduce the fabrication cost. Mn+ ions deintercalated from the anode during discharge are transported to the cathode via the solid electrolyte, while the electrons pass through the external circuit powering a device. During the charge/discharge processes, the potential for reactions and strain forming to occur in the electrodes may cause interfacial delamination. This phenomenon is detrimental to the cycling stability of the cells. In general, the utilization of surface modification techniques such as ball-milling, PLD-coating, and softening glassing methods, form the intimate interfacial contact between electrode and electrolyte.6 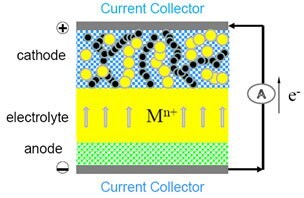 Figure 1.Schematic illustration of a solid-state battery based on Mn+ ion conduction.6 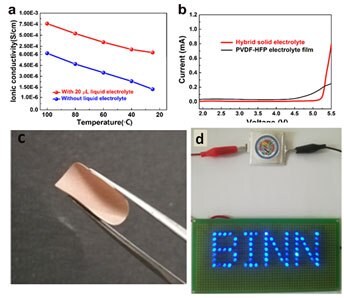 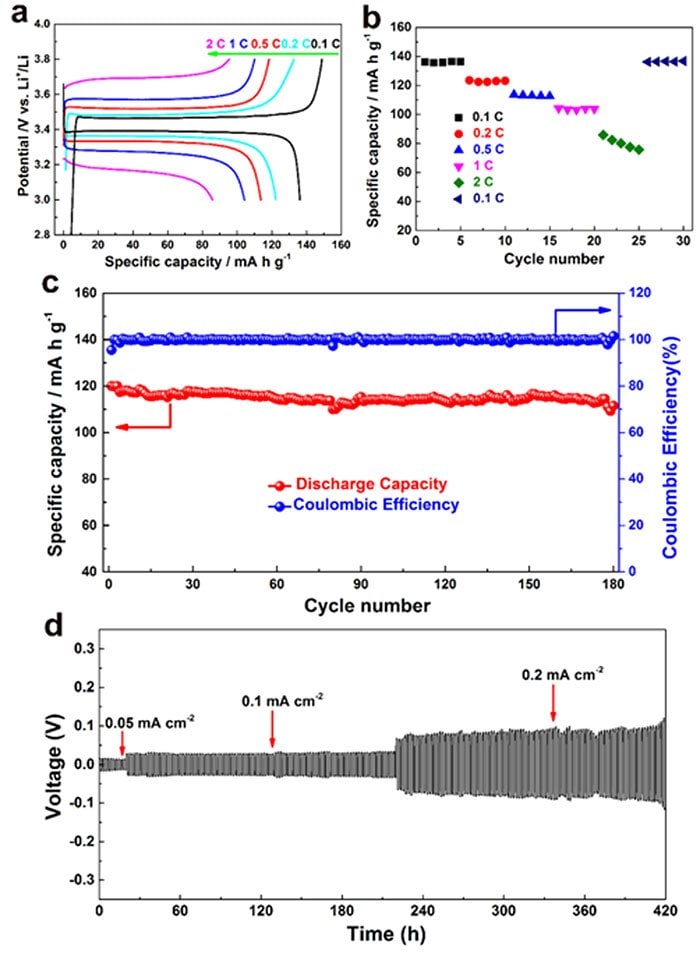 Figure 3.A) The first charge/discharge curves of the solid-state lithium battery at various current densities. B) Rate performance of the solidstate lithium battery in a potential range of 3.0–3.8 V vs. Li+/Li tested at 25 °C. (c) Cyclability performance tested at 0.5C rate. D) Voltage profile of the lithium plating/stripping cycling in the symmetrical Li|HSE|Li cell at 0.05, 0.1, and 0.2 mA cm-2, respectively.8

Besides developing the solid electrolytes with high ionic conductivity, improving the cyclability of metal batteries requires the stabilization of the metal anode. We reported an organic and inorganic composite membrane (CPM) composed of PVDF-HFP and LLZO particles to protect the Li anode.17 The CPM-modified Li symmetric cell showed no apparent voltage hysteresis over 500 h at 2 mA cm−2. Moreover, the CPM modified Li|LFP cell can stably run 800 cycles at 1C and retain a high average Coulombic efficiency of ~99.95%. We also found that the composite electrolyte membranes consisting of polyacrylonitrile (PAN)-Li6.5La3Zr1.5Ta0.5O12 (LLZTO) matrix as well as dual salts LiClO4 and Mg(ClO4)2 can improve the cycling stability of the lithium battery.18 We found another notable feature worth to noting that the magnesium salt is favorable for facilitating the decomposition of LiPF6 in the electrolyte to produce fluoride ions. Thus, a stable, protective layer of magnesium fluoride forms on the surface of the lithium anode, which can effectively inhibit the growth of lithium dendrites and increase the cycle life of the battery.

Further research to improve the rate performance of solid-state lithium batteries, using the ion-conducting polymer matrix as a binder in preparing the cathode or coating the cathode particles with ion-conducting materials is needed. In addition, a stabilizing lithium metal anode is also necessary to improve the cyclability of solid-state lithium batteries.

Solid-state sodium batteries have many merits, such as highenergy density, high safety, and serving as an abundant resource of sodium. The investigated solid-state electrolytes include b-alumina (Na2O·11Al2O3), Na3Zr2Si2PO12, Na3P1-xAsxS4 (0 ≤ x ≤ 0.5) Na3PSe4, 94Na3PS4-6Na4SiS4, Na3SbS4, 50Na2S- 50P2S5, 60Na2S-40GeS2, 50Na2S-50SiS2, and others.19 However, low conductivity of solid electrolytes, as well as the high interfacial resistance between electrolyte and electrodes, present two main challenges for practical application of solidstate sodium batteries. To address the low conductivity of solid electrolyte of Na3Zr2Si2PO12 (NZSP) at room temperature, we prepared NaSICON structured Ca2+-doped Na3Zr2Si2PO12 with a higher ionic conductivity of 1.67X10-3 S cm-1 at room temperature.10 Neutron powder diffraction experiments (NPD) unveiled the anisotropic thermal displacements of the Na atoms and a more rigid framework structure by Ca2+ substitution for Zr4+ in NZSP, which is favorable for Na diffusion.

Current findings illustrate the need for scaling up the process of monolithic batteries as a key technology in future research. In addition, stabilizing metal Na anodes is a crucial technology to improve the cyclability of solid-state sodium batteries. 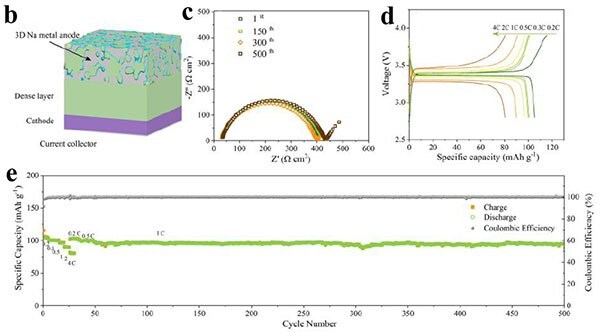 Figure 4.A) Schematic illustration of the monolithic NZSP solid-state electrolyte. B) Schematic of the full SSB. (c~e) Electrochemical performance of the solid-state sodium battery.10

Aluminum (Al) has many merits; it is abundantly available, lightweight, and has three electrons per atom Al. Allowing the achievement of the theoretical specific capacity of 2980 mAh g-1 and a volume capacity of 8046 Ah L-1.4,5 However, the development of an Al battery is hurdled by a solid electrolyte with high Al3+ conductivity. We identified the Al diffusion mechanism in (Al0.2Zr0.8)20/19Nb(PO4)3 through high-temperature NPD experiments and atomic-resolution scanning transmission electron microscopy (STEM) analyses.11 Temperature-driven Al displacement suggests that Al3+ ions diffuse across the structure by a vacancy mechanism. Figure 5A shows a Z-contrast (Z: atomic number) atomic-resolution high-angle annular dark-field (HAADF) image of (Al0.2Zr0.8)20/19Nb(PO4)3 taken along the [010] zone-axis. The yellow arrows indicate Al3+ ion columns, identified in the {10-2} crystallographic planes. Figure 5B presents the intensity profile of the Al3+ ion columns along a dash-dot line A-B in Figure 5A. The variation of the intensity of the Al3+ site suggests a random distribution of Al3+ and vacancies, promoting Al3+ transport in the ionic channel. Moreover, we first reported a rechargeable solid-state Al battery assembled with V2O5 nanorods/rGO (reduced graphene oxide) as a cathode, a dense (Al0.2Zr0.8)20/19Nb(PO4)3 pellet as an electrolyte and Al as the anode. The addition of a small amount of the molten-salt electrolyte consisting of sodium chloride (99.99%) and aluminum chloride (99.9%) (1:1.63 in mole ratio) improved Al3+ ion diffusion in the cathode/electrolyte interface. As shown in Figure 5F, the first discharge specific capacity of the cell reached 7.5 mAh g-1 at 120 °C while the charge specific capacity was 6.5 mAh g-1. Increasing the temperature to 150 °C, the cell showed a capacity value of ~10 mAh g-1. 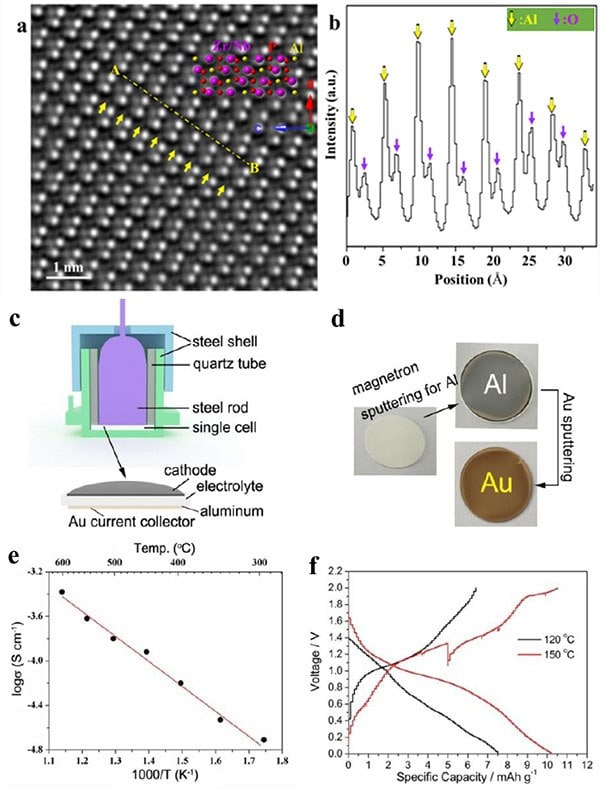 Scientists have studied solid-state batteries with other ionconducting electrolytes previously. Magnesium (Mg) batteries present another promising alternative to overcome the issues of poor safety and low energy density faced by LIBs. However, the development of a magnesium battery is plagued by the poor Mg2+ mobility in solids. Ceder et al. first reported fast Mg2+ ion conduction in spinel MgSc2Se4 by ab initio calculation and experimental characterization, which can integrate with Mg cathodes, like spinel-MgTi2S4 and Chevrel-Mo6S8, to make solid-state magnesium batteries.20 Their theoretical calculation also predicted that other chalcogenide spinels might have high Mg2+ mobility.

In summary, due to safety concerns, solid-state batteries have drawn considerable attention in recent years. Although the scientific community has achieved a great deal of progress on the solid-state Li batteries during the past decades, the low ionic conductivity of solid electrolytes and poor interfacial contact between electrolyte and electrodes fall among the two main challenges researchers still face. Solid-state Na and Al batteries are emerging technologies since they have advantages in terms of low costs and high volumetric-energy densities, respectively, compared to Li batteries. The author of this review provided an overview of the progress of solid-state Li, Na, and Al batteries developed in our lab. For solid-state batteries, solid electrolytes are the key components.

Developing solid electrolytes with high ionic conductivity becomes highly desirable. Achieving and maintaining good contact between solid electrodes and solid electrolytes proves essential for reducing the interfacial resistance. Utilizing soft polymer interlayer, a small amount of gel or liquid electrolytes has proven as feasible approaches to improve the ionic transport in the interfaces. Additionally, researchers may employ additional strategies to improve cathode performance. For example, scientists may use the ion-conducting polymer matrix as a binder in preparing the cathode or coating the cathode particles with ion-conducting materials, e.g., LiNbO3 and Li1+xAlxTi2-x(PO4)3 by wet chemical methods.