Center for Education and Research on Macromolecules University of Liege

The development of new medical devices and pharmaceuticals plays an integral role in the medical industry. Both natural and synthetic polymers possess benefits that make them valuable components in therapeutics. In fact, methods to encapsulate drugs in a polymer matrix have demonstrated improved therapeutic efficiency and bioavailability while preventing the drug degredation. In nanomedicine, the development of polymer-based nanocarriers was first initiated in response to the immunologic side reactions encountered with viral-based nanocarriers.1,2 In this context, we will discuss the recent emergence of methods that use natural polymers and their derivatives as tools to achieve a high degree of biocompatibility with controlled biodegradability.3

There are several families of natural polymers available on the market. Chitosan is one particular example of a polymer that has been thoroughly studied during the last few decades and shown to be a non-toxic, semi-crystalline,4 biodegradable,5 and biocompatible6 polysaccharide. Chitosan is a random copolymer of N-acetyl-glucosamine and glucosamine units obtained by the deacetylation of natural chitin, generally under alkali conditions at relatively high temperature (Figure 1).4 Natural chitin is a renewable resource that can be extracted from the exoskeleton of crustaceans or insects. Chitin can also be obtained from non-animal sources, namely from the cell walls of mushrooms.7,8 Generally, mushroom-derived chitosan displays a narrower molar mass distribution, and better traceability and reproducibility compared to chitosan prepared from animal sources.

The demonstrated biocompatibility and biodegradability of chitosan has rapidly paved the way for advancements in a number of biomedical applications9 including scaffolds for tissue engineering.10 For example, the three-dimensional porous structure of chitosan can be seeded with sensitive bioactive agents, including growth factors.11 Additionally, the combined hemostatic12 and antimicrobial13 properties of chitosan make it an outstanding candidate for use in wound dressings.14–15 In particular, these two intrinsic properties limit the risk of infection which, in turn, improves skin regeneration. The hydrophilic nature of chitosan makes it a suitable starting material for use in biodegradable and biocompatible hydrogels. The mechanical properties of pH-sensitive hydrogels can be adjusted by combining chitosan with simple additives like hydroxyapatite in order to meet specific application requirements.16

In pharmaceutical applications, chitosan17 has been successfully applied in the development of drug carriers18–19 for controlled drug delivery. The presence of positive charges in chitosan has been shown to increase adhesion to mucosa and as a result, increase the retention time.20 The positively charged chitosan backbone also allows for the formation of stable electrostatic complexes with polyanionic macromolecules, such as polyphosphate21 or nucleic acids.22 As a result, the application of chitosan for DNA or RNA encapsulation in gene therapy is an area of significant research.23 Chitosan solubility is of critical importance and is pH dependent. Chitosan is water soluble below pH 6.5 due to the protonation of the primary amine group. When soluble chitosan is required at neutral pH, two possibilities are available; either the use of chitosan oligomers (523682), which are known to be highly soluble in water in a wide range of pH values, or the use of a chemically modified chitosan derivative. Particularly, the ethoxylation of the primary alcohol of both glucosamine and acetyl-glucosamine units leads to O-glycol-chitosan, a fully water soluble chitosan derivative.

Effective non-viral delivery of nucleic acids has many challenges, including degradation via nucleases and a decrease in efficiency due to negative charges accumulated while crossing over cellular membranes. One approach to address these challenges is the formation of polymer complexes, known as polyplexes formed via electrostatic interactions between a polycation and the negatively charged nucleic acid, such as the well-known synthetic non-degradable polyethyleneimine. When forming a polyplex with chitosan, the presence of a primary amine group on the glucosamine repeating unit enables control over the charge density. This control is dependent on both the degree of acetylation and the pH. These properties have led to the successful application of chitosan in non-viral gene delivery24 for purposes such as (1) gene silencing (siRNA, shRNA), (2) compensating for defective genes, and (3) producing beneficial proteins or vaccines (DNA). Chitosan under slightly acidic conditions interacts with nucleic acids such as DNA or siRNA, leading to condensation of the nucleic acids into nanoparticles. This technique was successfully used for the formulation of a siRNA drug delivery system according to an ionic gelation process.25 Additionally, the biocompatibility and low toxicity of chitosan allow it to be used in vivo.26 To afford charge permanency and solubility27 in a wider pH range similar to other cationic synthetic polymers such as poly-l-lysine, quaternization of the chitosan primary amine was investigated.28 The quaternary amine was typically generated by reaction with methyl iodide followed by the substitution of the iodide counter-ion with a chloride ion by an ionexchange process. The resulting N,N,N-trimethyl chitosan chloride (TMC) is the most frequently reported quaternized chitosan in the literature used for transfection in gene therapy applications.29 Quaternization of chitosan improved the stability of ionic complexes relative to those based on pure chitosan. Further chitosan derivatizations allowed improvement of the TMC properties. For example, a combination of quaternization and grafting of thiol on TMC yields mucoadhesive properties of TMC by disulfide formation with mucin proteins of the cell membrane.30 Another example is the conversion of some primary amines in chitosan into carboxylic acids by reaction with succinic anhydride, which leads to improved solubility in neutral aqueous media.31 The collected acidbearing chitosan shows a higher solubility into water when at least 20 mol% of the primary amines are converted into carboxylic acids. Despite the fact the stability of the complex of carboxylated chitosan with DNA was shown to be weaker than with pure chitosan, a better transfection efficiency was observed.

The grafting of polymers or functional groups to chitosan is another option to improve gene delivery. The grafting of additional polymers or functional groups can lead to a better solubility and improved buffering capacity compared to unmodified chitosan. For example, the introduction of secondary and tertiary amino groups was shown to improve the transfection efficiency of chitosan.34 This one-step synthesis was based on the grafting of a carboxylic acid-bearing imidazole onto chitosan by amide formation, mediated by 1-ethyl-3-(3-dimethylaminopropyl) carbodiimide (EDC). This simple and reproducible process improved both the solubility and the buffering capacity of the synthesized chitosan derivatives.

Recent development efforts within the pharmaceutical industry have resulted in a number of highly hydrophobic, and thus poorly water soluble active pharmaceutical ingredient candidates (i.e., BCS Class II and IV drug candidates). This lack of solubility considerably reduces the bioavailability of a drug candidate and complicates its development, preventing commercialization. Targeted nanocarriers can be used to encapsulate hydrophobic drug candidates, allowing for intravenous administration.35 Derivatized chitosan has been shown to be an attractive candidate for hydrophobic drug encapsulation. The grafting of hydrophobic moieties onto the chitosan backbone gave the synthesized polymer amphiphilic properties. This amphiphilic copolymer was shown to self-organize into micelles, with the drug solubilized in the hydrophobic core. Alkyl chains were initially grafted to the chitosan by reacting aliphatic aldehydes with the primary amine in the chitosan backbone, to form the corresponding Schiff base. This was followed by reduction with NaBH4.36–37 This strategy successfully enabled the grafting of C3, C5, C6, C8, and C12 alkyl chains to chitosan.38–40 Amphiphilic properties can be more precisely tuned by grafting both hydrophobic and hydrophilic components on a single chitosan backbone. Sequential grafting of octyl chains by reductive amination followed by the grafting of sulfate was also successfully achieved.41 The grafting of aromatic rings, namely 2-carboxybenzoyl groups or phtalimide groups, has also been investigated.42–43

The use of renewable materials for the modification of chitosan has also been demonstrated. Here, fatty acids were grafted to chitosan using a coupling reaction between the primary amine of chitosan and the carboxylic acid of the fatty acid mediated by EDC in a methanol and water solution.44–45 Using this technique, saturated stearic acid and unsaturated lineoic acid were successfully grafted onto oligochitosan. These derivatives were then modified with cholanic acid and cholesterol. Modified glycol-chitosan with 5-β-cholanic acid has been extensively studied both in vivo and in vitro as a carrier for docetaxel and paclitaxel.46,47 Similarly, tocopherol-PEG-carboxylic acid has successfully been grafted onto chitosan.48

Chitosan can also be modified with synthetic side-chains, particularly with biocompatible and hydrophobic aliphatic polyesters. The grafting of poly(ε-caprolactone) (PCL) was largely investigated for the synthesis of amphiphilic biocompatible chitosan based copolymers by both “grafting from” and “grafting to” techniques (Figure 2).49–50 In the “grafting from” technique, the polymerization of ε-caprolactone was initiated directly by the primary amine, or the hydroxyl groups, present on the chitosan chain. In the case of the “grafting to” technique, polymer chains bearing an appropriate functional group at one chain-end were grafted onto the primary amine or hydroxyl groups of chitosan.51 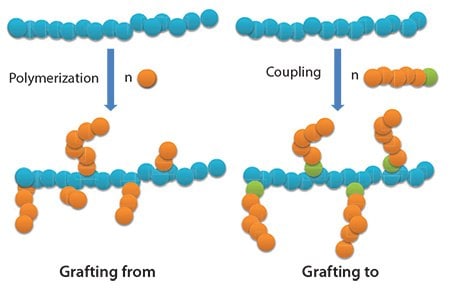 Figure 2.Illustration of the “grafting from” and “grafting to” techniques.

A selective initiation of the polymerization or grafting of a preformed polymer chain, exclusively by the hydroxyl groups can be reached if the primary amines are protected before reaction and deprotected afterwards.50,52–53 Remarkably, the chitosan primary amines can be protected by formation of a stable electrostatic complex with methylsulfonic acid, which is easily removed by precipitation in a phosphate buffer after polymerization. The reaction of chitosan with phthalic anhydride is another way to efficiently protect the primary amine groups. Such protection also improves the solubility of chitosan in organic solvents, namely dimethylformamide.54 Ester or urethane links are two examples of organic functions used for the grafting of PCL terminated by a carboxylic acid55 or an isocyanate group,54 respectively, onto hydroxyl groups of phthalimide-chitosan (Figure 3).

Compared to the “grafting from” technique, the “grafting to” technique was shown to demonstrate better control of the number and molecular weight of the PCL grafts onto chitosan. The grafting of polymer chains onto chitosan is not limited to PCL. The grafting of PEG chains onto chitosan is widely described in the literature.51,56 Recently, carboxylic acid-terminated PEG chains were grafted onto the primary amines of chitosan. The resulting grafted copolymer showed a reduced cytotoxicity compared to unaltered chitosan.51 Heterografted chitosan containing both PCL and PEG pendant chains was synthesized by Liu, et al. by simultaneous grafting of carboxylic acid-terminated PEG and PCL onto the hydroxyl group of phthalimide-chitosan leading to finely tuned amphiphilic properties.57

Finally, glucosamine58 (GlcNH2), the deacetylated monomer unit of chitosan, can be advantageously used to decorate nanoparticles for delivery of antibacterial and anticancer drugs.59–60 Indeed, GlcNH2 is known to be toxic to several malignant cell lines like human hepatoma, prostate, leukemia and breast cancer cells.61–64 Hence, GlcNH2 might be a promising target for the treatment of malignant cancer due to its inhibitory effect on transglutaminase 2 (TGase2), which contributes to drug resistance.62 GlcNH2 has also been used as a ligand in a kidneytargeted drug delivery system for delivery of prednisolone leading to an increase in concentration of prednisolone in vivo.65

Chitosan has received considerable attention as a functional biopolymer for diverse pharmaceutical and biomedical applications. Chitosan is a nontoxic, biocompatible, and biodegradable polymer. It can be formulated as a nanocarrier using ionic interactions, leading to drugloaded colloidal systems with mucoadhesive and remarkable permeationenhancing properties. Additionally, this pH-sensitive polysaccharide can also be formulated as a hydrogel.

The cationic properties of chitosan have enabled its extensive use for gene delivery. While nucleic acid-loaded chitosan nanoparticles fabricated from native chitosan have shown low buffering capacity and limited stability, chemically modified chitosan can help to improve in vivo transfection efficiency via: (1) quaternization to improve nanoparticle solubility and stability, (2) grafting of polymer chains to improve endosomal escape, or (3) grafting of ligands for specific cell targeting. When a hydrophobic moiety is conjugated to chitosan, the resulting polymer can self-assemble and encapsulate a poorly soluble drug. Grafting a steroid, fatty acid, or PCL onto chitosan or glycol chitosan can also lead to nanocarriers that are useful for drug delivery, in particular passive or active targeting of anticancer drugs to tumors.