Chitin, a natural polysaccharide, is the second most abundant natural biopolymer in the world, after cellulose. It is the primary, high modulus fibrous component of the exoskeleton of arthropods including crab, shrimp and lobsters, as well as some fungi. Structurally, chitin is an insoluble, linear, highly crystalline polymer, composed of isotactic poly- N-acetyl-D-glucosamine (Figure 1A). Chitosan, the only naturally occurring cationic amino polysaccharide (Figure 1B), is derived from the N-deacetylation of chitin, resulting in a copolymer of N-acetylglucosamine and glucosamine. Chitosan is characterized by the degree of deacetylation (DDA), which allows it to be soluble in dilute acetic acid when the DDA is >40%. Chitosan has been widely studied for a variety of biomedical applications such as wound healing, hemodialysis membranes, drug and gene delivery systems, implant coatings and tissue engineering/regeneration due to its good biocompatibility, biodegradability with no acidic degradation products and non-toxic nature. Specific functionality designed for biomedical applications is achieved on chitosan by grafting pendant functional groups through primary amine or hydroxyl groups, without modification of the polymer backbone in order to preserve original properties. 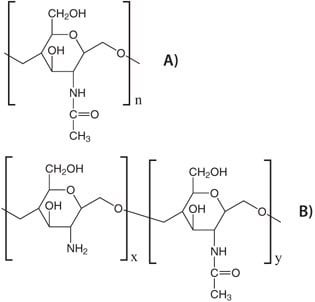 Figure 1.Chemical structure of A) chitin and B) chitosan.

Chitosan's unique physiochemical and biological properties make it ideal for utility in drug delivery systems. It has been reported to enhance drug permeation across the intestinal, nasal, and buccal mucosa1. Chitosan nanoparticles encapsulated with insulin were first prepared in 1997 by Alonso et al. for nasal delivery in rabbits2. Studies show that chitosan enhances the absorption of peptides such as insulin and calcitonin across the nasal epithelium3. Chitosan nanoparticles have also been developed for applications in gene delivery4. It is the most significant natural polymer-based gene delivery vector due to its biodegradability, biocompatibility and unique ability to form a complex with DNA through electrostatic interactions when protonated in acidic solution5,6. Mumper et al. first described chitosan as a delivery system for plasmids7. Chitosan/plasmid DNA nanoparticles were readily formed by complexation between the positively charged amine groups on chitosan and negatively charged phosphate groups on DNA. Molecular weight and the degree of deacetylation (DDA) have significant impact on chitosan's performance in gene delivery. High molecular weight chitosan leads to more chain entanglements with DNA, creating stronger complexes and gives rise to improved gene delivery efficiency8. The DDA, typically between 40-100%, affects the physiochemical properties of the chitosan. Moderate DDA increases the transfection efficiency of chitosan in gene delivery system, but for pure chitosan its transfection efficiency is still relatively low compared to viral vectors. Numerous chemical modifications such as quaternization9, deoxycholic acid modification10, galactosylation11, PEI grafting12 and thiolation13 have been carried out on chitosan in an attempt to improve its gene transfection efficiency. Modified chitosan and its nucleic acid loaded nano-complexes have created a new method for fabricating gene therapy for management of various diseases.

Studies suggest that chitosan and its derivatives are promising candidates as supporting material for tissue engineering applications. Chitosan-based tissue scaffolds include skin14 (Figure 2), bone15,16 (Figure 3), cartilage17, liver18,19, nerve20 and blood vessel21,22. The versatility of chitosan is due to an intrinsic antibacterial nature, minimal foreign body reaction, wound-healing activity, as well as the ability to form porous structures and gels. Additionally, chitosan has a high affinity to in vivo macromolecules, suitable for cell ingrowth and osteoconduction. Importantly, chitosan has been found to have an acceleratory effect on the tissue engineering processes due to the polycationic nature which enhances cellular attraction to the polymer.

One example of chitosan in skin tissue engineering and use as a dermis substitute is the scaffold formed by the bilayer structure of chitosan film and sponge. The scaffold was processed successively via the formation of a dense chitosan film by solution casting, followed by lyophilization to form a porous chitosan sponge. Porogens such as sodium chloride, glucose and sucrose were used to create large pores in the chitosan sponge layer (Figure 2). When human neofetal dermal fibroblasts were seeded within the chitosan sponge layer, cells grew and proliferated in an extended shape on the bottom of large pores. After the culture fibroblasts could bind tightly with the sponge layer via newly formed extracellular matrices to give a living cell-matrix-chitosan composite. During cell culture, the bilayer chitosan material remained stable; however, contraction is typically observed in collagen sponge material used as a tissue engineering scaffold. The results suggest that chitosan utilized as scaffolds in skin tissue engineering would be good alternatives to some collagen materials14. It has been found that the degree of cell attachment also depends on the percent of deacetylation of the chitosan22. 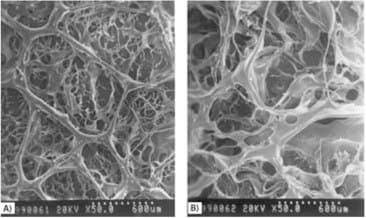 Chitosan has also been explored for utility in tissue engineering for bone repair. Phosphorylated chitosan (P-chitosan) can be mixed into a calcium phosphate cement and implanted into a bone defect. For example, P-chitosan cement implanted in rabbit bone defects shows that all wounds healed gradually and the rabbits were active with no postsurgery complications. After implantation for 1, 4, 12, and 22 weeks, X-ray radiographs (Figure 3) show that the P-chitosan containing samples permitted stabilization of the defected bones and maintenance of correct position. New bone formation and implant biodegradation in the bone defects could be clearly reflected by the gradually weakened umbral on the radiographs. During the entire process, bone repair in controls progressed less perfectly than those with phosphorylated chitosan reinforced implants. 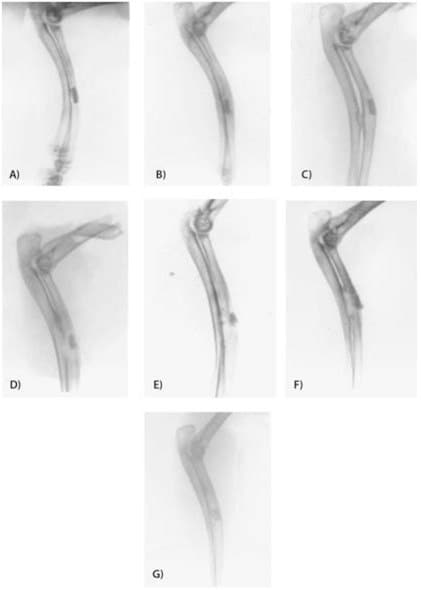 1. Implantation surgery can be replaced by a simple minimally invasive injection procedure
2. Cells and bioactive moieties like growth factors can be readily incorporated in situ
3. Gels can be formed in any desired shape with good alignment to the surrounding tissue
4. Gels can enable sustained or stimuli responsive drug release
5. Gels reduce the frequency of administration and thus lighten the burden for the patients

In the past years, many injectable chitosan-based hydrogels have been developed for tissue engineering. These hydrogels are prepared by either physical24 or chemical crosslinking methods, such as redox-initiated25, photo-initiated26 and enzymatic27 crosslinking. Moreover, crosslinked hydrogels parameters such as gelation time, gel modulus and hydrogel degradability can be adjusted by the molecular weight of polymers and the crosslinking densities.

Hemodialysis is an extracorporeal blood purification procedure for the treatment of patients with late-stage renal disease, which utilizes a polymeric semipermeable membrane to remove desired amounts of toxic biological metabolites from blood. Chitosan has been identified as a material to serve as an artificial kidney membrane because of its suitable permeability to urea and creatinine, in addition to its high tensile strength. However, pure chitosan membranes are impermeable to serum proteins and possess inadequate compatibility. Various modifications improve the compatibility, selectivity and dialysis rates for medium- and large-size molecules for chitosan hemodialysis membranes. For example, chitosan with pendant 2-hydroxyethylmethacrylate (HEMA) grafts utilized in dialysis membranes showed enhanced permeation to glucose, urea, and albumin relative to the unmodified chitosan films28. Heparin and dextran sulfate were also used to modify chitosan membranes to improve their blood compatibility in hemodialysis29. The chitosan-graft-poly(vinyl acetate) (chitosan-g-PVAc) membranes were found to exhibit higher permeability to creatinine, urea, and glucose compared with the commercial cellulose membrane and are impermeable to the essential nutrient albumin30. Due to all these excellent properties, potential applications like artificial organs, such as kidneys and pancreas, are envisaged from these chitosan-based membranes.

Chitosan and chitosan derivatives have received considerable attention as a functional biopolymer for pharmaceutical and biomedical applications. They can be formulated as nano-carriers for drug and gene delivery, hydrogels for tissue engineering, and membranes for hemodialysis. There are still many potential applications which need to be developed for chitosan and its derivatives, indicating that they have yet to be utilized to reach their full potential.