Fibrous materials are playing an increasingly significant role in a variety of applications, including textiles, nonwoven substances, composite materials, and more. Polymeric nanofibers, in particular, are an exciting new class of material, attracting significant attention due to their remarkable properties, such as high specific surface area, high porosity, high molecular alignment, and nanosize effects (Figure 1A).1 Moreover, nanofibers allow for easy incorporation of a variety of different therapeutic molecules, while expanding the drug loading capacity of the nanofibers and supporting the sustained release of embedded drug molecules (Figure 1B). Additionally, the easy manipulation of polymeric fibers as macroscopic bulk material may give rise to potential uses as implantable local drug delivery platforms. Figure 1.A) Schematic images of film and nonwoven nanofiber meshes. B) Examples of the different types of molecules that can be easily incorporated into nanofibers.

Nanofibers can be synthesized using a variety of techniques. These include phase separation, self-assembly, electrospinning, drawing, and microfluidic methods.2 One of the most widely studied techniques is electrospinning. Electrospinning offers a relatively inexpensive, straightforward method of creating a variety of continuous fibers with uniform diameters from the micro- to nanometer scale.3 It is also versatile in that almost any soluble or fusible polymer can be processed into nanofibers.

Recently, the scientific community has renewed its interest in expanding the library of available functional nanofibers different applications. Nanofibers with multi-compositions, for example, can be prepared by electrospinning polymers blended with nanoparticles, carbon nanotubes, ceramics, biomolecules, and other substances.4 These functional nanofibers show promise for a diverse array of applications such as tissue engineering, sensors, and wound healing. Furthermore, nanofibers with “smart” properties have attracted interest for such applications as “on-off” switchable control of permeability, wettability, and swelling/deswelling behavior.5 Specific polymers are used in the fabrication of smart nanofibers; these polymers are coined with different names, based on their physical or chemical properties such as “stimuli-responsive,” “environmental-sensitive,” “smart,” or “intelligent” polymers. For consistency and clarity, the term “smart polymers” shall be used throughout the remainder of his article.

Nanofibers exhibit one characteristic that essentially defines their smartness: the ability to respond to very slight changes in the surrounding environment. The fast macroscopic changes occurring in their structure and the reversibility of these transitions demonstrate the uniqueness of these materials. Nanofibers from smart polymers can have rapid response rates due to their inherent design features.6 This review focuses on the applications of smart nanofiber meshes as an implantable local drug delivery platform by introducing four types of nanofibers, as shown in Figure 2. These are nanofibers with sustained (type A), on-off (type B) drug release properties, and nanofibers that exist as a combination of one of these types with thermo-therapy (known as type C and D, respectively), made possible by the introduction of a heat source. 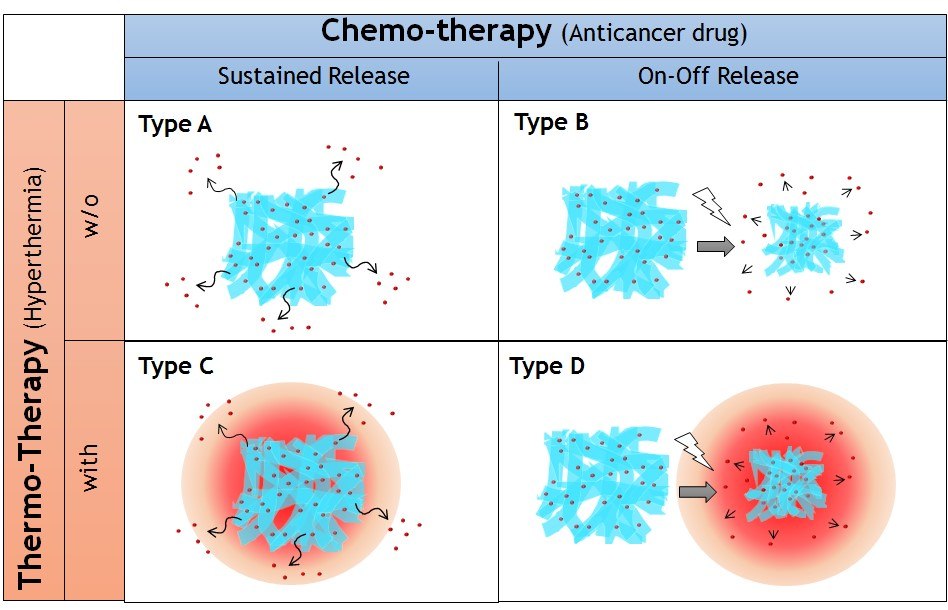 Our research group has developed a nanofiber mesh that is directly wrapped around the damaged peripheral nerves to promote regeneration and restore functionality. The nanofiber mesh is composed of poly(e-caprolactone) (PCL), a biodegradable aliphatic polyester approved by the US Food and Drug Administration (FDA) for biomedical applications such as drug delivery, tissue engineering scaffolds, and implant materials.7 Scientists synthesized PCL by ring-opening polymerization from terminal hydroxyl groups of an initiator using tin octoate (S3252) as catalyst.8 ;PCL nanofibers were produced by an electrospinning method using 1,1,1,3,3,3-hexafluoroisopropanol (HFIP, 105228) as a solvent.

The mesh contains methylcobalamin (MeCbl), an active vitamin B12 homolog delivered favorably to nerve tissues, proving effective in promoting nerve regeneration and neuronal cell survival. PCL nanofiber meshes gradually released MeCbl for at least 8 weeks when tested in vitro (Figure 3A). Local implantation of nanofiber sheets incorporating MeCbl successfully contributed to the recovery of motor and sensory function, the recovery of nerve conduction velocity, and the promotion of myelination after sciatic nerve injury, without affecting plasma concentration of MeCbl.9

We have also tested the PCL nanofiber systems with an immune-modulating agent (Figure 3B),10 inactivated virus (Figure 3C),11 and microRNA (Figure 3D) for the treatment of basal cell carcinoma, prostate cancer cells, and liver cancer cells, respectively. These examples suggest the advantages of nanofiber systems in which different types of molecules can be easily incorporated regardless of molecular size, shape, surface charge, and hydrophilicity. In addition to sustained release, temporal control of drug administration is critical for effective chemotherapy. Recently, a new medication concept called “dose-dense chemotherapy” has gained much attention, as it achieves maximum tumor destruction by increasing the rate of chemotherapy delivery, rather than by increasing dosage. Administration of a weekly dose of chemotherapy, rather than every 3 weeks, allows the treatment to interrupt the rapid growth phase of the tumor cells.13 Given this situation, smart nanofiber meshes have the potential to be used for temporal drug release triggered by external stimuli. However, one of the significant challenges in the development of smart nanofiber meshes is the design of nanofibers with dynamically and reversibly tunable fiber structures on both the nano- and macro-scopic scale. This was achieved by electrospun copolymers of N-isopropylacrylamide (NIPAAm, 731129) with a UV-reactive benzophenone (BP) conjugated co-monomer.14 These photo-crosslinkable, temperature-responsive, polymer-based nanofiber meshes demonstrated dynamically and reversibly tunable properties, including swelling/shrinking, mechanical strength, and porosity. However, one shortcoming of this method is that the phase transition temperature of the copolymer decreases after the conjugation because of the hydrophobic nature of BP. Therefore, we also fabricated smart nanofibers by electrospinning copolymers of NIPAAm and N-hydroxymethyl acrylamide (HMAAm) because the hydroxyl groups of HMAAm are subsequently crosslinked by thermal curing. The successful fabrication of copolymers into a well-defined nanofibrous structure with a diameter of about 600–700 nm, where the fibers preserved their morphology even after thermal curing.

The resulting crosslinked nanofibers showed rapid and reversible volume changes in aqueous media in response to cycles of temperature alternation around body temperature.15 The on-off switchable release of dextran from the crosslinked nanofibers was observed. Almost all the dextran was released from the nanofibers after six heating cycles, whereas only a negligible amount of dextran was evolved during the cooling process. These drug release profiles, show that the proposed system can release a certain amount of a drug in response to the circadian rhythm of the disease. This allows for the use of such a system for the optimal treatment of chronic diseases that show circadian variation such as asthma, hypertension, myocardial infarction, and arthritis.

Although chemotherapy has historically been the standard treatment for primary and metastatic cancer, its clinical benefits are still limited when administering a single anticancer drug. Therefore, combination chemotherapy regimens containing two or more classical anticancer drugs have been applied in clinical practice to treat a variety of cancers in the past decades. For example, numerous clinical trials have shown a significant reduction in tumor size when combining chemotherapy with other treatments such as radiotherapy and thermal therapy.16 Thermal therapy, also called hyperthermia, is a type of cancer treatment in which body tissue is exposed to high temperatures (43–45 °C).

Hyperthermia can also enhance the effects of certain anticancer drugs such as paclitaxel (PTX), making some cancer cells more sensitive to treatment. From these perspectives, we have designed a smart nanofiber system using a combination of chemotherapy and hyperthermia for more effective cancer therapy (Figure 4A).17 The mesh is composed of biodegradable PCL with PTX and magnetic nanoparticles (MNPs) (Figure 4B). The PCL mesh released PTX slowly for at least 6 weeks when tested in vitro. The prolonged therapeutic effect observed in vivo as a continuous release of medication from the mesh over an extended period compared with the direct injection of PTX into the tumor site. Also, the synergistic anticancer effect was achieved upon excitation of the mesh with an alternating magnetic field (AMF) because the MNPs within the nanofiber generated localized heat, which caused heat-induced cell killing as well as enhanced chemotherapeutic effect of PTX. Based on these results, the smart nanofiber system shows promise for cancer therapeutics in the future and may provide new insights for the future development of localized thermo/chemotherapy.

On-off switchable drug delivery systems have also gained attention from the viewpoints of circadian clocks.18 For example, programmable-in-time drug delivery systems are being used as chronotherapeutics. Combining this system with hyperthermia treatments promotes PTX-induced apoptosis through the activation of caspase-7, increasing the proportion of cells arrested in G2/M, thereby reducing the IC50 of PTX.

Given these backgrounds, we have been developing a smart hyperthermia nanofiber system with simultaneous heat generation and drug release in response to on-off switching of AMF for the induction of cancer apoptosis.19 The nanofiber is composed of a chemically-crosslinkable temperature-responsive polymer, poly(NIPAAm-co-HMAAm) with an anticancer drug (doxorubicin; DOX) and MNPs. An electrospinning method was employed to fabricate the mesh.

By chemical crosslinking, the nanofiber mesh exhibits switchable changes in the swelling ratio in response to alternating on-off switches of AMF because the self-generated heat from the incorporated MNPs induces the deswelling of polymer networks in the nanofiber, allowing the observation of the corresponding on-off release of DOX from the nanofibers in response to AMF (Figure 4C). 70% of human melanoma cells died in a 5 min application of AMF in the presence of MNPs and DOX incorporated nanofibers through the double effect of heat and drug.

This smart hyperthermia has also been applied to lung adenocarcinoma. The phase transition temperature of the temperature-responsive mesh was adjusted to the mildhyperthermia temperature range of around 43 °C. In vitro anti-tumor studies demonstrated that both MNP- and PTX-loaded mesh killed about 66% of cells, whereas mesh loaded with only PTX killed about 43% of cells.20 In a mouse lung cancer model, the thermo-chemotherapy combo displayed enhanced anti-tumor activity, eliminating the systemic toxic effects on the mice due to local release of the chemotherapeutic agents. We believe that these types of proposed fiber system may provide a blueprint to guide the design of the next generation of local drug delivery systems for safe and effective cancer treatment.

Among these fibers, those that can be combined with stimuliresponsive media are known as smart fibers. Smart fibers can be controlled remotely by applying external stimuli, without changing other fiber characteristics. The dynamic nature of these smart fibers can also be used to induce mechanical forces that lead to changes in cellular behavior.21 Taking all the merits of smart fibers into account, these materials can be utilized as tools for a wide range of applications.

The author would like to acknowledge financial support by JSPS KAKENHI (Grant Number 264086 and 26750152). The author is grateful to Prof. Allan S. Hoffman (University of Washington) for continued and valuable comments and discussion.