Over recent years, a wide variety of challenges aiming for electrical pumping of organic laser diodes have been addressed. However, organic laser diodes have difficulty gaining widespread application due to their high lasing thresholds under electrical pumping. A variety of organic semiconductors have been developed to reduce the lasing threshold, which include not only small molecular materials but also conjugated polymers. In this article, we demonstrate that bis-styrylbenzene derivatives show promising characteristics for very low lasing thresholds and discuss the design considerations for organic lasing molecules.

The dissolution of luminescent organic dye molecules in an organic solvent followed by their excitation with high-energy light (greater than their lasing threshold) produces a laser beam. Due to their broad tunabilities, dye lasers have made remarkable advancements.1-5 In recent years, organic solid-state lasers involving the dispersion of an organic dye within a solid/crystal matrix have also been actively studied. In 1989, we proposed an idea to create an organic semiconductor laser diode using triplet excitons of rare earth complexes such as a europium (Eu) complex.6 This system would produce an electrically excited laser with a low threshold by forming a population inversion using the long excitation lifetime of Eu. There have been many studies reporting amplified spontaneous emission (ASE) oscillation from an organic solid thin film and laser oscillation from an organic thin film with an oscillator structure. The thin films in these studies were made by doping a polymer or small-molecule medium with an appropriate laser dye.7-11 These studies provide evidence that organic dyes have suitably high stimulated emission coefficients and that the formation of a solid thin film waveguide can provide the necessary architecture for a solidstate device with a low lasing threshold. More recently, laser oscillations from organic semiconductor dyes, which take electrical excitation into consideration, have also been actively studied.12,13 This interest was generated because organic light-emitting diodes (OLEDs) have achieved an internal luminescence efficiency of nearly 100% through the use of a triplet excited state at the luminescence center. This excited state leads to the realization of an organic semiconductor laser that is an extension of OLEDs a practical study subject of organic electronics.14 In addition, light-emitting transistors have also become capable of producing highly efficient electroluminescence (EL), prompting new electrical excitation developments of organic semiconductors.14-21 In this article, we will discuss materials issues for the production of an organic semiconductor laser. This process requires the development of a new laser material with a focus on a low lasing threshold. Derivatives of bis-styrylbenzene (BSB) have demonstrated extremely good ASE oscillation characteristics in organic solid thin films.15,16 As a result, we will introduce new organic semiconductor materials with similar ASE characteristics in organic solid thin films by using BSB analogs as active materials.

The Mechanism and Goal of Organic LEDs

For Alq3 (Prod. No. 444561) and DPVBi, luminescence is found during the transition from the excited singlet state to the ground state. In contrast, for Eu (Prod. No. 538957), platinum (Pt) (Prod. No. 673625), and iridium (Ir) (Prod. No. 688096) complexes, all singlet excitons undergo intersystem crossing into triplet excitons due to the internal heavy atom effect. In the triplet state, a radiative transition occurs with high luminescence efficiency. Use of an Ir compound at the luminescence center reportedly provides a high external EL quantum yield (ηext) of greater than 20%, showing that the internal quantum yield (ηint) reaches almost 100%.22 As described above, the electrons and holes injected into the organic layer result in almost immediate exciton formation.

To investigate various organic laser materials, we synthesized a variety of styrylamine-, coumarin-, and cyanine-based materials. Here, we will discuss the light amplification characteristics (ASE characteristics) of styrylbenzene derivatives, which we believe to be the most promising laser materials.15,16 Figure 3 presents a selection of the molecules that were studied.

Table 1 shows the ASE characteristics of thin films that are 6 wt% doped with styrylbenzene-based luminescent materials under optical excitation with 4,4’-bis[9-dicarbazolyl]-2,2’-biphenyl (CBP) (Prod. No. 660124) as the host. Typical BSB which have a dimer skeleton often exhibit especially low threshold (Eth ≅ 1.0 μJ/cm2). Molecules with a heterocycle have an ASE threshold of 20 to 100 μJ/cm2, and molecules with an azomethine skeleton do not cause emission spectrum narrowing even with an excitation energy >100 μJ/cm2. To identify the controlling factors of ASE thresholds, data values for absolute photoluminescence quantum efficiency (φf ), fluorescence lifetime (τf ), radiative decay constant (kr), and triplet-triplet absorption are shown in Table 1.

The ASE thresholds are not directly correlated with φf or τf but are greatly correlated with kr. The magnitude of kr can determine how large the threshold is. 4,4’-bis[(N-carbazole)styryl]biphenyl (BSB-Cz) has extremely good ASE characteristics. The threshold of BSB-Cz is the lowest of the styryl-based fluorescent materials studied so far.15 The luminescence intensity and lifetime do not depend on temperature, so the nonradiative decay is completely inhibited, even at room temperature. The ASE oscillation wavelength of BSB-Cz corresponds to the 0-1 transition in the PL spectrum. The radiative decay constant (kr), stimulated emission cross-section (σem), and absorption crosssection (σABS) are calculated as below. kr (= ηPL/τf ) is calculated with the fluorescence lifetime (τf ) and luminescence quantum efficiency (ηPL) of each codeposited thin film. σem is given by equations (1) and (2) below with the absolute luminescence quantum yield and fluorescence lifetime of each codeposited thin film:24,25

OLED and FET structures also show promise in realizing an organic semiconductor laser. The OLED structure is basically a double heterostructure to effectively trap electrons and holes as well as trapping generated excitons within the luminescent layer. Advantages of this structure include the ability to use the OLED design guidelines developed so far and the flexibility to select a wide range of organic materials. However, a drawback of this structure is the failure to guide light effectively if a metal electrode is used as the cathode. Therefore, a transparent electrode such as ITO needs to be used at both the anode and cathode. For example, when a transparent device structure with ITO (30 nm)/a-NPD (20 nm)/CBP:BSB [6 wt%] (70 nm)/BCP (20 nm)/Alq3 (20 nm)/MgAg (X nm)/ITO (30 nm)15 is used, a clear ASE oscillation is noted under optical excitation as long as the MgAg layer is between 1 and 3 nm thick (Figure 5).

Figure 5.ASE characteristics under the excitation of light from an electrically excitable laser structure

Recently, even transistor structures have allowed luminescent devices to be constructed. Light emission has actually been observed near the drain electrode by using p-type organic semiconductors such as oligothiophene27, tetracene28 (Prod. No. 698415), fluorene-based polymers (Prod. No. 571032), PPV-based polymers29 (Prod. No. 541443), and thiophene-based oligomers30 (Figure 6).

Also, use of a tetraphenylpyrene derivative (TPPy) has dramatically improved luminescence efficiency with an external EL efficiency of 1%.31 These devices are unipolar light-emitting transistors, and their operation mechanism is shown in Figure 7-1. Application of a gate voltage allows holes to accumulate between the electrodes and the organic layer, and an increase in the voltage between the source and drain electrodes allows a region with no hole accumulation (known as a pinch-off region) to be formed near the drain electrode. A strong electric field is created at the interface between the drain electrode and the pinch-off region, accelerating the electron injection. 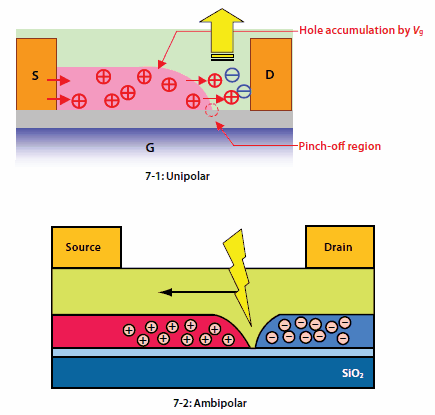 In addition, the development of ambipolar organic semiconductors has lead to higher EL efficiency, and some ambipolar devices (Figure 7-2) have been fabricated with polymer organic semiconductors.32,33 Even in a small-molecule system, a clear electroluminescence has been observed (Figure 8) when a single-crystal from a BSB derivative with a simple molecular frame34 is used. Application of an appropriate gate voltage provides electroluminescence between the source and drain electrodes. This ambipolar type architecture also has many advantages over OLEDs and shows promise as a future device structure for organic semiconductor lasers. Transistors using organic substances have been studied since the early 1980s when a pioneering organic transistor was first reported.35 As findings about materials and devices have accumulated rapidly, the use of fused polycyclic aromatic compounds such as tetracene and rubrene (Prod. No. 554073) have recently achieved an electron field-effect mobility of about 10 cm2/Vs. Electroluminescence from devices using a transistor structure has a high electronic and optical freedom, and are therefore suitable for organic semiconductor lasers, holding promise for future developments.