For more than 50 years, organic single crystals have been investigated as tools for determining the intrinsic charge transport properties of semiconductor materials. Recent developments have broadened their potential use to applications of increasing relevance to modern technology. One example is the new ways in which these materials can be used to advance the field of organic electronics and energy harvesting. Here, we highlight the most important of these developments from organic materials.

Excitonic studies constitute a very important aspect in the efforts of understanding the fundamental mechanisms that drive the performance of solar cells. One benchmark material in these investigations is rubrene (551112), a highly-ordered semiconductor. Rubrene holds the distinction of being the organic material with the highest charge carrier mobility which reaches 20 cm²/vs.1 Given the technological relevance of this particular material, a lot of attention is being given to the unveiling of its electronic and transport properties. Podzorov and coworkers have employed rubrene as a model for the investigation of fundamental optical properties of organic semiconductors.2 They have demonstrated how one can extract important information about interfacial charge dynamics and trapping. In addition, they have utilized rubrene to understand exciton dynamics, showing that in high-purity molecular crystals singlet-triplet and triplet-singlet conversion processes (fission and fusion) and long-range exciton diffusion (3–8 µm) might be the dominant processes important for organic photovoltaics and photoconductivity.2

p-n junctions are the most basic elements of electronic devices with an exceptional potential to elucidate optoelectronic effects in organic semiconductors. The recent work by Briseno and co-workers demonstrates the application of 1-D, p-n junctions. In their study, single-crystalline p-n junction nanoribbons of organic semiconductors were fabricated by selective crystallization of copper hexadecafluorophthalocyanine (F16CuPc, n-type, 446653) on copper phthalocyanine (CuPc, p-type, 702854) single-crystalline nanoribbons, as shown in Figure 1. Knowledge regarding interfacial charge separation and/or transport in organic devices is only partly understood. If this class of materials is to play a part in the future of next generation “all organic” solar cells, then there must be an improved fundamental understanding of the organic/organic interface in order to increase power conversion efficiencies. It is well known that the electrical properties depend on nanostructure size, uniformity, crystallinity, phase segregation, interfacial interactions, mobility, trap density, and many other factors. For macroscopic devices (i.e. bulk heterojunction devices), these parameters can vary significantly over the active area, making it difficult to attribute any change in performance to a particular phenomenon. Single nanowire p-n devices allow for more precise control over and characterization of the properties listed above, greatly reducing the uncertainty in data interpretation, which is the reason that the Briseno group is fundamentally interested in probing the photocurrent response at discrete p-n nanostructures. Systems such as the ones described here, put us a step closer to fully understanding the charge-transport and photovoltaic behavior at organic-organic interfaces.3 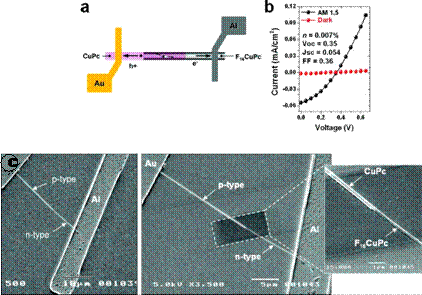 Other organic 1-D nanostructures have been effectively used in electronic devices. Perylenetetracarboxyldiimides (PTCDIs) have been shown to self-assemble into 1-D nanowires from solution (Figure 2).4 Briseno and coworkers demonstrated the use of 1-D organic semiconductors in complementary devices. Devices based on a network of PTCDI nanowires have electron mobilities and current on/off ratios on the order of ~10-2 cm²/Vs and 104 cm²/Vs, respectively. Complementary inverters based on n-channel PTCDI nanowire transistors and p-channel hexathiapentacene (HTP) nanowire OFETs achieved gains as high as 8.

Figure 2.(A) Series of optical photographs detailing the interfacial self-assembly of PTCDI nanowires (NWs). The last picture frame illustrates a 500 mL flask containing a large quantity of PTCDI-C8 (663913) NWs that were also synthesized in ~25 min. (B) Colorized SEM image of a network of PTCDI-C8 NWs drop-cast across the fold electrodes from a methanol suspension. ©2007 American Chemical Society.

It has been shown that it is possible to pattern organic single crystals over large areas (Figure 3). This capability puts the potential application of these materials beyond the scope of fundamental studies.5

Figure 3.Controlled deposition of crystalline semiconductors. (A) Procedure for the controlled deposition of organic single crystals on patterned substrates by microcontact printing. To grow the crystals, the patterned substrates are placed in a temperature-gradient furnace tube with the organic source material. (B-C) Electron micrographs of single crystal arrays of pentacene (698423) and rubrene (551112), respectively.

In order to effectively employ organic single crystals in mechanically flexible devices their fundamental mechanical properties as well as the effect of mechanical strain on their electronic and transport properties need to be understood and characterized. Our laboratory is currently investigating this unchartered area of research.

Organic single-crystalline semiconductors are among the most heavily researched topics in the field of organic electronics.6 This area of research is unique as it combines the fundamental principles from areas of engineering, chemistry and physics. Historically, research in the area of single-crystal transistors has focused on the intrinsic properties of organic semiconductors and on fundamental issues associated with charge transport. In principle, through integration with micro-fabricated circuits on flexible substrates, this new area may result in a viable technology for flexible electronics.

Considerable efforts are still needed to convert organic single-crystal transistors into a practical semiconductor technology. A focus on fundamental properties and device mechanics will likely pave the way in this area. Investigating the “wavy” nature and stretchable properties of ultra-thin organic single crystals is another avenue to explore.7 Single-crystal patterning, control of crystal size and azimuthal orientation will require further attention especially because high-mobility materials such as rubrene exhibit anisotropy. Patterning of both p- and n-type organic semiconductor single crystals on a common device structure is the ultimate challenge. Another opportunity is to employ ambipolar organic semiconductors that will allow the transport of both electrons and holes. Finally, organic single-crystal nanowires require a method of patterning, otherwise they will serve little purpose, in spite of the fact that bulk-scale quantities can be synthesized from the solution-phase.8 If the aforementioned issues can be successfully addressed, we anticipate the described approaches to represent a significant step towards the realization of high-performance flexible organic field-effect transistors for use in real-world applications.