Dye-sensitized Solar Cells (DSCs) are 3rd generation solar cells combining the promise of high efficiency with low production costs. While present-day DSCs provide light-to-electricity conversion of up to 11%,1-3 significant further improvement is envisaged through optimized materials and novel cell and module architectures. In addition, DSC devices can be manufactured to be semi-transparent to harvest light from practically any angle and direction paving their way for use as photovoltaic windows in buildings or small devices. The schematic shown in Figure 1 depicts the working principle of a DSC:

DSC operation is much closer to photosynthetic processes than operation of standard solid-state photovoltaic devices such as silicon-based solar cells. As with photosynthesis, the effectiveness of the light conversion in DSCs depends on the relative speed of reactions, i.e. kinetics. The electron injection into the titania conduction band is much faster than electronic relaxation processes back to the ground state or chemical side reactions involving the excited state of the dye. Moreover, the reduction of the oxidized dye (Ru3+) by I¯ is significantly faster4 than the direct recombination reaction between the injected electron and Ru3+.

In dye-sensitized solar cells, the dye is one of the key components for high power conversion efficiencies. In recent years, considerable developments have been made in the engineering of novel dye structures in order to enhance the performance of the system. In particular, amphiphilic homologues of the pioneering ruthenium based N-3 dye have been developed. These amphiphilic dyes display several advantages compared to the N-3 dye such as: 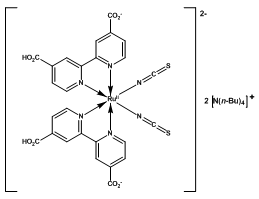 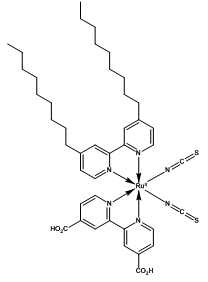 A translucent DSC with an active area of 0.88 cm2 (8 mm x 11 mm) based on Dyesol test cell hardware7,8 prepared with N-719 dye is illustrated in Figure 4. The orange area is a result of the dye-modified titania; the yellow color is given by the electrolyte of the system. 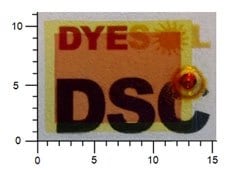 Standard test cells are characterised by typical JV plots as shown in Figure 5 when tested at three different sun levels (1 sun corresponds to 100 mW cm-2). The voltage,V, and the current density, J (mA cm-2), at the maximum power point are represented by Vmax and Jmax. Therefore the efficiencies can be calculated by: