Since the first report of the low-cost dye-sensitized solar cell (DSSC) in 1991 by Gratzel and his coworker,1 dye-sensitized solar cells (DSSC) has been regarded as one of the most promising photovoltaic technologies because of their transparent and colorful characteristics, as well as low cost. Unlike the semiconductor p–n junction-type solar cell, DSSC has been categorized as a liquid junction type because it contains a redox electrolyte. However, DSSC can also be fabricated as a solid-state structure by replacing the liquid electrolyte with solid hole conductors. DSSC is composed of a nanocrystalline TiO2 film deposited on a fluorine-doped tin oxide (FTO) substrate, a redox electrolyte or a hole conductor, and a counter electrode. Light harvesters are adsorbed onto a TiO2 surface to generate electrons and holes. Pt or carbon can be used as the counter electrode material for liquid junction-type device, and Au or Ag can be used as the counter electrode material for the solid-state devices. During the past two decades, substantial progress has been made. As a result, solar-to-electricity conversion efficiencies as high as 12% have been achieved using a 10-μm mesoporous TiO2 film whose surface was sensitized with porphyrin dye and a cobalt redox electrolyte.2 Meanwhile, solid-state DSSC was developed in 1998 by replacing the liquid electrolyte with 2,2’,7,7’-tetrakis(N,N-p-dimethoxy-phenylamino)-9,9’-spirobifluorene (spiro-MeOTAD) as a hole conductor.3 However, the conversion efficiency was as low as 1%. To improve the efficiency, organic dyes with high absorption coefficients have been designed and synthesized for solid-state DSSC. Despite these efforts, no significant improvement has been made. Inorganic quantum dot materials, such as Sb2S3 (Prod. Nos. 229466 and 244562) and CdSe (Prod. No. 244600), have been applied as sensitizers, and show better efficiency than organic sensitizers.4,5 A breakthrough technology in solid-state DSSC was made in 2012 by Park’s group, where CH3NH3PbI3 perovskite sensitizer adsorbed onto a 0.6-μm thick TiO2 film delivered an efficiency of 9.7%.6 Soon after our report, 15% efficiency was reported based on a perovskite sensitizer.7 Progress in DSSC employing nanoscale inorganic sensitizers is presented here.

In DSSC, among the three important components (mesoporous n-type oxide film, sensitizer, and redox electrolyte or p-type hole conductor), the mesoporous oxide film should be considered first because photovoltaic performance depends significantly on crystal phase, band structure, morphology, pore size, and porosity of the oxide layer. Differences in the crystal phase of the used TiO2 film can lead to different photovoltaic performance although the same sensitizer and electrolyte are used. For example, anatase TiO2 (Prod. No. 637254) was found to be superior to rutile TiO2 (Prod. No. 637262).8 Electron transport kinetics are influenced by nanoprticle packing structure, where the closely packed anatase TiO2 film showed faster electron transport than the loosely packed rutile TiO2 one.8 In order to utilize incoming light more effectively, a bilayer structure composed of a light scattering overlayer on the nanocrystalline, semitransparent layer is proposed as better than a single layer comprised of TiO2 nanoparticles (Prod. Nos. 700347, 700355, and 700339). The scattering effect is expected to depend on the size, refractive index, and/or position of the scattering particle. The size-dependent scattering efficiency at the bilayer structure was studied, and light scattering was found to be related to wavelength-dependent light reflection.9 Large TiO2 particles with spherical shapes are normally used for the scattering layer. Although these large-sized particles play an important role in light scattering, such a low-surface-area scattering particle hardly offers any additional effect, such as electron generation, because dye adsorption is expected to be much less for large particles than for nanocrystalline TiO2. To overcome this problem, bi-functional TiO2 having a nano-embossed hollow spherical shape was developed, which was confirmed to be better than the simple large sized TiO2.10 Control of the porous structure in TiO2 film is also important in terms of dye adsorption, transport of redox shuttle, and infiltration of the hole conductor. Selective positioning of three different dyes was realized by controlling pore size.11 Compared to the iodide/iodine redox shuttle, pore size and porosity of a TiO2 film is more critical for mass transport of larger redox shuttles such as cobalt complexes.12 Thus, a wellorganized mesoporous TiO2 film is specifically required for high efficiency DSSC.

Solid-state DSSC is a kind of pin junction type, where the intrinsic (i) light harvester-adsorbed TiO2 (n) is in contact with the p-type (p) hole transport material (HTM). Figure 1 shows the cross-sectional SEM image of a real device. A blocking layer is deposited on an FTO glass to prevent direct contact between FTO and HTM. Mesoporous TiO2 film forms on the blocking layer, where a submicrometer thickness is recommended for the perovskite sensitizer. Spiro- MeOTAD HTM material is infiltrated into the mesoporous film. A metal layer such as gold or silver is then deposited on top of the HTM layer.

A breakthrough for the solid-state DSSC was made in 2012 using the organolead halide perovskite CH3NH3PbI3, in which a PCE of 9.7% was demonstrated under the simulated AM1.5G one sun illumination.6 The perovskite sensitizer can be deposited on the TiO2 surface by either one-step6 or two-step7 coatings. For the onestep coating, CH3NH3I is first prepared by reacting CH3NH2 (Prod. No. 295531) and HI (Prod. No. 752851), which is mixed with PbI2 (Prod. No. 203602) in γ-butyrolactone (GBL) (Prod. No. B103608) or dimethylformamide (DMF) (Prod. No. D158550). For the two-step coating, PbI2 forms first on the TiO2 surface, which is followed by dipping the PbI2-coated TiO2 film in the CH3NH3I solution. The perovskite solar cell also shows long-term stability. Two months later, higher efficiency was reported using a mixed halide perovskite, where a PCE of more than 10% was achieved using the CH3NH3PbI2Cl adsorbed Al2O3 layer.13 Al2O3 used in this device acts simply as a scaffold layer, not as an electron accepting layer. Further improvement in PCE was achieved in 2013, where 12.3% was reported using the CH3NH3PbI3 sensitizer and polytriarylamine (PTAA) (Prod. No. 702471) HTM,14 and the certified efficiency of 14.1% was reported.2 Perovskite solar cells show very high photovoltage approaching or higher than 1 V, which is not generally observed from organic dye solar cells. In addition, high photocurrent can be achieved from the submicrometer-thick TiO2 layer. The question is why organolead halide perovskite solar cells show extremely high photovoltaic performance. One reason is a high absorption coefficient, more than one order of magnitude higher for CH3NH3PbI3 than N719 dye.,15 Another important reason is the perovskite sensitizer has the ability to accumulate charges (Figure 2), which was confirmed by detection of capacitance measured by impedance spectroscopy.16 Efficiency as high as 20% is realistically expected from the organometal halide perovskite solar cells because of the unique opto-electronic property of the perovskite sensitizer.17 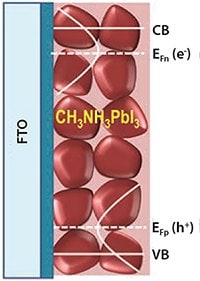 Figure 2. Schematic showing density of state, associated with charge accumulation, for the light harvesting perovskite CH3NH3PbI3. The blocking layer is presented in between FTO and perovskite.

Quantum dots (QDs, semiconductor nanocrystals) are one of the promising sensitizers for DSSC because of their high absorption coefficient, tunable band gap, and the possibility of multiple exciton generation (MEG). In order to utilize not only visible but also near infrared (NIR) light, low band gap QDs should be designed. Among the various low band gap QDs, PbS is one of the most intensively studied since it has a high absorption coefficient and a wide range of tunable band gap owing to its large Bohr exciton radius of 18 nm.18 PbS QDs have been applied to DSSC, and a high PCE of 3.82% with photocurrent of 18.84 mA/cm2 was reported.19 However, the observed photocurrent was far below the theoretical value. Inefficient charge separation and collection, associated with electron injection and recombination, is argued to be the main drawback limiting the performance in PbS QDs. We have recently solved this problem by a doping method.5 The successive ionic layer adsorption and reaction (SILAR) method was used to deposit QDs on the TiO2 surface, where co-deposition of Pb and Hg ions led to Hg-doped PbS QDs. Compared to the bare PbS QDs, Hg-doped PbS QDs showed a much higher photovoltaic performance, especially a superb photocurrent approaching 30 mA/cm2. From the analysis of the extended X-ray absorption fine structure (EXAFS) and femto-second laser dynamics, the significant improvement in optical property was found to be related to the structural change and the enhanced chemical bonding nature between Pb and S.

Figure 3 shows the I-V characteristics of a Hg-doped PbS QD-sensitized solar cell. Recently, we proposed a new technology to increase the number of QDs on the oxide surface by controlling surface charge through modification of solution pH.20 The pH of the solution containing Pb2+ and Hg2+ was determined to be 3.2, where the TiO2 surface was positively charged as this was lower than the point of zero charge (pH=6) for TiO2. However, addition of triethanolamine (TEA) (Prod. No. 33729) changed the pH from 3.2 to 8.5, leading to a negatively charged surface. The amount of the adsorbed QDs increased from 2.3 × 104 μm-2 without TEA to 5.0 × 104 μm-2 with TEA because of strong interaction between the positive ions and the negative TiO2 surface. Thanks to the significantly increased QD concentration in the given TiO2 film, six-fold enhancement in photocurrent was realized by the surface charge control method. Apart from the PbS QD, several other quantum dots such as InP, CdS, CdSe, and Sb2S3 have been investigated as either sensitizer or p-type light harvester in a p–n junction solar cell. Since most of the inorganic nanocrystals exhibit much higher absorption coefficients than molecular sensitizers, QD materials are expected to be promising light harvesters for thin film solar cells. Inorganic sensitizers such as organometal halide perovskites and metal chalcogenides were reviewed. Methylammonium lead halide perovskites made a breakthrough in the dye-sensitized solar cell field. Since long-term stability was confirmed and the perovskite could form on an oxide surface within few seconds, commercialization of perovskite solar cell is likely. In addition, low-cost high efficiency solar cell technology is expected from perovskite solar cells since a PCE of 20% is realistically possible. For QDs, panchromatic absorption from visible to near IR is attainable by tuning the bandgap through quantum size effect, which can lead to extremely high photocurrent density. The challenging task of the future will be combining perovskite and NIR-absorbing QDs into super high efficiency technologies.