Although the field of high surface area materials is considered very mature, the need for improved materials for alternative energy applications remains pressing. Currently, zeolites, metal oxides, and activated carbons dominate the market, but more advanced materials are required for a variety of applications.1 A potential solution has come from a somewhat unlikely place: coordination polymers. Although extremely well-studied for decades, the types of metal-ligand interactions that can reliably yield permanently porous coordination networks only emerged approximately ten years ago. This happened after the discovery of metal-organic materials having higher surface areas than the best zeolites. The term metal-organic frameworks (MOFs) has been used extensively to describe such coordination polymers. Further developments of MOFs has led to materials with record-setting surface areas, surpassing the best activated carbons.2-4 The surface area of one gram of some MOFs approach that of a football field (120 x 53.33 yards implies 6,400 sq. yards or ca. 5,351 m2).

The two most examined MOFs, known as MOF-5 and HKUST-1 (Hong Kong University of Science and Technology) also called Cu-BTC,6 were first reported in 1999. MOF-5 is composed of zinc(II) clusters with terephthalic acid dianion as the organic linker as depicted in Figure 1. The Brunauer-Emmett-Teller (BET) surface area of MOF-5, which accounts for the possibility of multilayer gas adsorption on a surface, is ca. 3,500 m2/g. HKUST-1 is composed of copper(II) paddlewheel dimers linked by trimesic acid trianion (Figure 1). The surface area of HKUST-1 (commercially available as Basolite C 300 under Product No. 688614 ) is ca. 1,900 m2/g. MOF-177, which is among the highest known surface area materials, is the prototypical high performance MOF (Figure 2).7 The metal cluster in MOF-177 is the same as that of MOF-5. However, unlike MOF-5, the linker is not linear but rather derived from the tritopic carboxylic acid 1,3,5-tris(4'-carboxyphenyl)benzene, often referred to as H3BTB (Prod.uct No. 686859 ). MOF-177 is formed under identical conditions as MOF-5 (N,N-diethylformamide, 100 ºC). Its BET surface area approaches 4,750 m2/g.8 Figure 1. Typical approach to the synthesis of MOFs 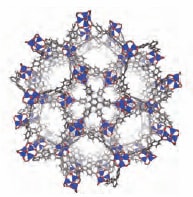 The Chemistry of MOFs

As a rule, MOFs are synthesized under solvo- or hydrothermal conditions in the presence of a base. A typical synthetic scheme is depicted in Figure 1. Many MOFs are prepared in pure N,N-diethylformamide (DEF, Product No. 186317 ) or N,N-dimethylformamide (DMF, Product No. 227056 ), which are well known to undergo decomposition at elevated temperatures to slowly generate an amine base that deprotonates the organic functionalities of the linker and generates the metal-organic clusters. The reactions are carried out either in glass scintillation vials (ca. 100 mg) or in glass jars (1-10 g) sealed with Teflonlined caps to prevent solvent escape and/or corrosion of the caps. The reaction solutions are then heated to 50-250 ºC and crystalline materials are thus formed. Subsequently, the solvent is removed from the crystals. The crystals are submerged in a variety of low boiling, non- or weakly coordinating solvents (such as CHCl3, CH2Cl2, methanol, ether) to extract DEF, DMF, and/or water from the pores of the material. Finally, the crystals are filtered from the solution and dried under vacuum at elevated temperature to completely evacuate the pores. Once the MOF is evacuated it is likely to become air and moisture-sensitive, i.e., it may decompose or re-hydrate irreversibly in air. Some tips for maximizing the surface area of a MOF include using fresh DEF or DMF (which tend to degrade over time or upon exposure to air), filtration and/or sonication of the reaction mixture prior to heating, degassing of the reaction solvent with N2, and certainly the proper activation/evacuation procedure described above. Each of these steps can reduce crystal defects and enhance the surface area of the material. The most important analytical techniques used in the characterization of new materials include surface area analysis by gas sorption, X-ray diffraction (XRD powder and/or single crystal), elemental microanalysis (CHN), IR, and thermogravimetric analysis (TGA). Each freshly prepared batch of a known MOF should be characterized by XRD and surface area analysis to confirm its phase purity. Often, however, the presence of interpenetration, i.e., another framework within the pores of the first framework, is difficult to detect. Such additional framework may have a profound effect on properties of the material through pore blockage. 9 By far, the most widely examined use for MOFs is gas storage toward alternative, clean mobile energy. Two of the main candidates being examined include hydrogen gas and methane gas. Hydrogen certainly represents the cleaner (greener) option but the difficulty of producing, safely storing, and transporting hydrogen in large quantities has limited its utility to date. Hydrogen is attractive due to the high energy output with low environmental effect since water is its combustion by-product. Transport of hydrogen represents a significant challenge due to its low molecular weight and very weak attractive forces between hydrogen molecules. The storage for hydrogen in a given space at a given temperature and pressure can be increased by physisorptive binding of hydrogen to a surface, which enables closer packing of its molecules by weakly attractive forces. MOFs, as the highest surface area materials known, represent the best opportunity to meet these requirements. Separation and purification applications represent further opportunities for MOFs. Often, energy-intensive processes, such as distillation or conversion of one component into something more easily removeable, are used to achieve difficult separations. Simplifying these processes could mean significant savings of energy resources. Therefore, in the context of energy applications, the separation of CO2 from flue gas using MOFs will be discussed in our article below.

Although initial reports of high levels of room temperature hydrogen storage in MOFs generated much interest, the failure to reproduce these initial results has led to a shift towards cryogenic storage. Cryogenic hydrogen storage has now been studied in a variety of MOFs,13 including MOF-177, which was shown to reversibly uptake 7.5 wt % hydrogen at 77 K (-196 °C) and ca. 55 bar. Figure 4 illustrates MOF-177's superiority over other MOFs in terms of high-pressure hydrogen storage.8 Although this result remains far from the DOE YR2015 goal of 7.5% for a storage system,14 it still represents among the highest excess hydrogen uptake for a physisorptive material. Higher surface area MOFs generally trend toward higher hydrogen storage capacity, but it cannot be assumed that a high surface area always implies higher capacity, as shown in the case of UMCM-2.3 The BET surface area of this MOF is 5,200 m2/g, the highest of all published materials, yet the excess gravimetric hydrogen uptake at 6.9 wt % for UMCM-2 still falls short of that for MOF-177. This could be related to pore volume, pore shape, and/or other features that have not yet been fully recognized in MOFs. Thus, there remain considerable challenges and opportunities to rationally increase hydrogen storage capacity in MOFs beyond their current levels. 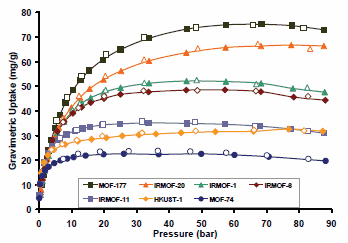 A large amount of research has focused on increasing the affinity of MOFs for hydrogen while maintaining high surface area and the reversibility of adsorption and desorption. To do this would entail increasing the heat of hydrogen adsorption. The factors that govern the heat of adsorption are poorly understood for physisorptive materials, but it is speculated that they may include the incorporation of small pores, pore shape (cylindrical vs. rectangular, etc.), and coordinatively unsaturated metal centers, each of which could promote tight binding of hydrogen. Until recently, MOF-505, a Cu-based MOF formed from biphenyl-3,5,3',5'-tetracarboxylic acid, has been cited as being the highest capacity, low pressure hydrogen uptake material (2.6 wt %) at 77 K and 1 atm, which indicates its high heat of hydrogen adsorption and a strong hydrogen affinity.15 UMCM-150, another Cu-based material, has a lower heat of adsorption for hydrogen at 7.3 kJ/mol. However, it still displays impressive excess gravimetric hydrogen uptake of 2.1 wt % at 77 K and 1 bar due to significantly higher surface area than MOF-505.10 MOF-74 and Co-, Ni-, and Mg-based analogs,16 which are all formed using 2,5-dihydroxyterephthalic acid (Product No.382132), have small cylindrical pores with coordinatively unsaturated metal centers. They are also known to have high heats of adsorption for hydrogen at 77 K and 1 atm.17,18 These MOFs are generally limited by relatively low surface areas, though.8 Hupp and coworkers have used post-synthetic modification of a Zn-based 1,2,4,5-tetrakis(4'-carboxyphenyl) benzene (Product No. 715298), 3-di(4-pyridyl)-2,3-butanediol (Product No. 43653) pillared MOF with lithium or magnesium ions to increase affinity and uptake of hydrogen. Unfortunately, their material demonstrated only low surface areas of (ca. 800 m2/g).19 It should be noted that increasing hydrogen affinity in the low pressure regime may ultimately have limited value. The operating pressure for a storage system is unlikely to be less than 1 atm, meaning that uptake below this pressure is essentially wasted on gas that can not be delivered.

Compressed natural gas (CNG) vehicles are already on the road today. Gas (methane) pressures in the fuel tank of such vehicles can approach 3,600 psi (248 bar). To reach similar economical energy output, yet improve safe storage and transport, the DOE has set targets for methane storage of 180 v(STP)/v (v(STP) = standard temperature and pressure of methane; v = volume of adsorbent) under 35 bar.20 A number of MOFs in the IRMOF series,21 i.e., Zn-based MOFs with the same metal cluster but varying linear organic linkers, were tested for methane storage. IRMOF-6 (155 cm3(STP)/cm3) was found to be the highest in this series surpassing MOF-5 (135 cm3(STP)/cm3) and IRMOF-3 (120 cm3(STP)/cm3) at 36 atm. Examination of the Raman spectra of the adsorbed methane at pressures of up to 30 bar in the IRMOF series revealed that variation in the organic linker alone can significantly influence the adsorption affinity of methane in these materials.22 Zhou has recently reported that a Cu-MOF, PCN-14, with an anthracene-based linker can demonstrate high uptake of methane (absolute methane adsorption capacity estimated to be 230 v/v at 35 bar and 290 K).20 Although an impressive accomplishment, some doubt has been expressed that this has in fact exceeded the DOE target, based, in part, on the difference between a crystallographic density and a bulk packing density.23 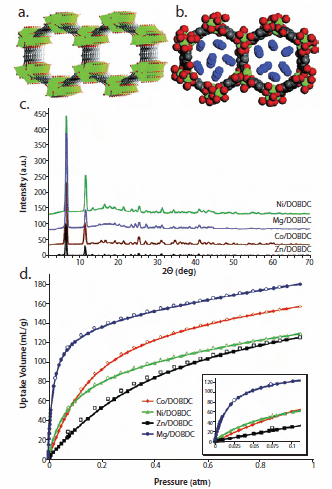 Even with the global push for alternative energy, carbon dioxide emission remains a growing concern. For example, if methane gas were implemented as a primary fuel source, CO2 woulgd still be emitted as a by-product of combustion. Currently the largest single point sources of CO2 emission are power plants that produce streams of flue gas, exhausted combustion smoke, with CO2 concentrations of ca. 15% at 1 atm. While storage of CO2 is not much of a challenge, the separation of CO2 from streams of flue gas represents a significant problem that must be addressed by the development of high CO2 affinity materials before any thought of geologic sequestration can be effectively implemented. We recently published data on the use of MOF-74, a Zn-based material, and its Co-, Ni-, and Mg-based analogs in the uptake of CO2 at low pressure.16 The Mg-based analog of MOF-74 (Mg/DOBDC) was found to uptake ca. 35 wt % CO2 at 1 atm and RT (Figure 5). This value is significantly higher than that of any other physisorptive material under the same conditions including zeolite 13X (molecular sieve type 13X). Since our report, Blom, Dietzel, and co-workers have confirmed our results and reported an X-ray crystal structure data showing CO2 molecules bound to the metal centers in the Ni-based analog of MOF-74.24 Accomplishing such uptakes in the presence of other components in flue gas is ultimately needed to contemplate replacing existing capture technologies based on chemisorption by amines.