Over the last decade, dye-sensitized solar cells (DSSCs) have attracted much attention because these unconventional solar cells exhibit high performance and have the potential for low-cost production.1-4 Recently, solar energy-to-electricity conversion efficiencies as high as 11% under AM 1.5 G irradiation have been attained with DSSCs.5-7 In DSSCs, the photosensitizer is one of the most important components influencing solar cell performance, because the choice of sensitizer determines the photoresponse of the DSSC and initiates the primary steps of photon absorption and the subsequent electron transfer process. Generally, Ru-polypyridyl-complex sensitizers, e.g., cis-dithiocyanato bis(4,4'-dicarboxy-2,2'-bipyridine)ruthenium(II) (called N3 (703206) or N719 (703214) dyes) developed by Prof. Grätzel and coworkers, have been employed for efficient DSSCs.4,5

Structure and Operating Principle of DSSC

Figure 1 shows a schematic of a DSSC and presents the mechanism of electric power generation in the DSSC. First, a sensitizer molecule, which is adsorbed on the surface of a nanocrystalline TiO2 electrode, absorbs the incident photon flux and is excited from the ground state (S) to the excited state (S*). One type of photoexcitation causes transfer of an electron from the highest occupied molecular orbital (HOMO) of the sensitizer to its lowest unoccupied molecular orbital (LUMO). Subsequent injection of the excited electron into the conduction band of the TiO2 electrode results in oxidation of the sensitizer molecule. The injected electron diffuses through the TiO2 electrode toward the transparent conducting oxide (TCO)-coated electrode and through the external load and wiring, eventually reaches the counter electrode. The oxidized sensitizer is reduced by I- ions in the electrolyte, regenerating the ground state of the sensitizer, and I- ions are oxidized to I3 - ions. The I3 - ions diffuse toward the counter electrode where they are reduced back to I- ions. Overall, electric power is generated without permanent chemical transformation.

Figure 1.Schematic of a DSSC illustrating the mechanism of electric power generation.

The photocurrent produced in a DSSC is directly influenced by the properties of the sensitizer. For example, the energy gap between the HOMO and LUMO of the sensitizer (which corresponds to the band gap, Eg, for inorganic semiconductor materials) determines the photoresponse range of the DSSC. Absorption over a wide range of wavelengths, extending into the near-IR region due to a small HOMO-LUMO energy gap, is necessary for harvesting a large fraction of the solar spectrum, which in turn produces a large photocurrent and thus highly efficient solar cell performance. In addition, the energy levels of the HOMO and LUMO must match the iodine redox potential and the Ecb of the TiO2 electrode. For electron injection, the LUMO must be sufficiently more negative (higher energy) than the TiO2 Ecb; the energy gap between the two levels is the driving force for electron injection. The HOMO must be sufficiently more positive (lower energy) than the redox potential of I-/I3 - to accept electrons effectively. Thus, the molecular structure of the sensitizer must be strategically designed so that its properties are optimal for efficient DSSC performance.

Molecular structures of two of the MK dyes (MK-2 and MK-14) are shown in Figure 2. These molecules consist of a donor moiety (carbazole unit) and an acceptor moiety (cyanoacrylic acid) connected by a π-conjugated structure of an oligothiophene moiety. This donoracceptor structure gives a strong absorption with a large absorption coefficient in the visible region due to the intramolecular π-π* transition. The absorption peak (λmax) is observed at 480 nm16 for MK-2 and 483 nm17 for MK-14 in tetrahydrofuran-toluene (20:80 vol %) solution. The molar absorption coefficient ε at λmax for MK-2 and MK-14 is 38,40016 and 36,200 M-1 cm-1,17 respectively. In addition, these organic dyes have a carboxy group as an anchoring group to adsorb onto the nanocrystalline TiO2 electrode. 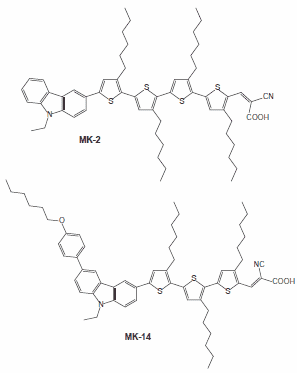 Furthermore, an important feature of this new organic dye is the presence of n-hexyl substituents on the oligothiophene backbone. We expected that the long alkyl chains would decrease strong π-π* stacking interaction between molecules, decreasing electron injection yield, and physically restrain the I3 - ions away from the TiO2 surface and consequently decrease charge recombination between the electrons and I3 - ions. Thus, new strategic molecular designs of organic dyes in terms of engineering the interface between the organic dyes and the TiO2 surface are required to improve photovoltaic performance of organic DSSCs.

Solar Cell Performance of the DSSCs Based on MK Dyes

The spectrum of incident photon-to-current conversion efficiency (IPCE) for a DSSC composed of a nanocrystalline TiO2 electrode, MK-2, and an iodine redox (I-/I3 -) electrolyte is shown in Figure 3. 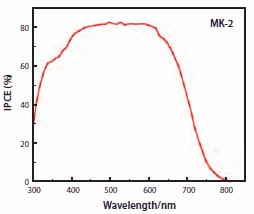 Figure 3.The incident photon-to-current conversion efficiency (IPCE) spectrum for a DSSC based on MK-2.

Photons with a wide range of wavelengths (350-800 nm) can be converted to current by DSSCs based on this dye. IPCE values higher than 70% were observed at 400-650 nm; the maximum being 80% at 498 nm. When the reducing effect of reflection and absorption losses in the TCO substrate are excluded, the photon-to-current conversion efficiency in this range exceeds 90%, which indicates highly efficient performance of these solar cells. The solar energy-to-electricity conversion efficiency, η (%), of solar cells can be estimated from the following equation: 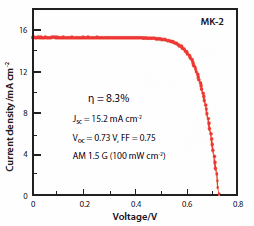 Figure 4.The photocurrent density versus voltage curve for a DSSC based on MK-2.

where D is the electron diffusion coefficient, and τ is the electron lifetime. For example, the τ values for DSSCs with conventional coumarin dyes were much shorter than the value for DSSCs based on a Ru complex, which suggests that charge recombination between conduction- band electrons in the TiO2 and I3 - ions in the electrolyte occurs more easily in solar cells based on coumarin dyes. From this result, we concluded that the shorter τ values, which result in shorter L values, for DSSCs based on organic dyes relative to those based on Ru complexes lead to lower performance of DSSCs with organic dyes than those for DSSCs with Ru complexes.

As mentioned, an important feature of MK dyes is the presence of n-hexyl substituents on the oligothiophene backbone. We found that the τ values for the DSSCs based on MK dyes, which bear alkyl chains, were longer than the values for the DSSCs based on other organic dyes, which have thiophenes without alkyl chains.15-18 We concluded that the long alkyl chains prevent the approach of I3- ions to the TiO2 surface due to a steric effect, a hydrophobic effect, or both, thereby decreasing the concentration of I3- ions near the TiO2 surface, and thus reducing charge recombination between the electrons and I3- ions and increasing the τ value. Our success with these alkyl-functionalized MK dyes strongly suggests that the photovoltaic performance of DSSCs based on organicdye sensitizers can be improved further.

Figure 5 shows long-term stability data for a DSSC based on MK-2 and an IL-based electrolyte (0.1M LiI-0.4M I2-0.1M TBP in 1-methyl-3-n-propylimidazolium iodide, Prod. No. 49637) under continuous AM 1.5 G irradiation through a UV (<420 nm) cut-off filter at ca. 50 °C. No decrease in the η was observed over a period of more than 2,000 hours (Figure 5).19 This result clearly indicated that the DSSC based on MK-2 was stable under visible-light irradiation at a relatively low temperature. 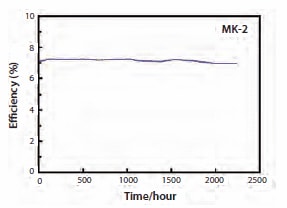 Figure 5.Long-term stability of a DSSC based on MK-2 with an ionic liquid electrolyte under visible-light irradiation.

We designed and synthesized alkyl-functionalized carbazole dyes (MK dyes) for use in DSSCs. The DSSCs based on MK dyes showed both high solar cell performance of up to 8% under simulated AM 1.5 G irradiation and good long-term stability under continuous simulated solar light (visible-light irradiation). One of most important features of MK dyes is the presence of a n-hexyloligothiophene backbone, which prevents charge recombination between electrons and I3 - ions on the TiO2 electrode, and improves the stability of the dye molecule and the solar cell performance. Our results strongly suggest that the MK dyes can be successfully designed for use in DSSCs and further demonstrate the promising performance of DSSCs based on organic dye sensitizers.