Controlled radical polymerization (CRP) techniques have been reviewed in a number of articles1,2 and books,3 and include nitroxide-mediated polymerization (NMP),4-7 reversible addition fragmentation chain transfer (RAFT),8-10 and atom transfer radical polymerization (ATRP).11 All of these CRP techniques operate by rapidly establishing an equilibrium between a small fraction of active polymerizing chains and a majority of dormant moieties. ATRP has proven to be versatile and effective in providing a controlled polymerization environment for a wide range of vinyl monomers including styrenes, (meth)acrylates, acrylonitriles, and dienes.3 ATRP differs from conventional radical polymerization because of the ability of a metal complex to dictate the rate of monomer addition to the propagating polymer chain end. While the procedure to perform normal ATRP is simple with essentially three components (initiator, catalyst, and monomer) added to solvent, the equilibrium equation describing the reaction is more complex, and is shown in Figure 1.

This equation may appear to have a high degree of complexity, but its meaning and importance can be illustrated by three situations: a polymer sitting dormant on the left side of the equilibrium; a polymer reacting with monomer on the right side of the equilibrium (and growing in molecular weight); and two radical end-groups combining to terminate and kill the reaction (this is neither reversible nor desired). In ATRP, the reaction resides on the left side of the equation most of the time. This minimizes the likelihood for two radicals to exist near each other at the same time and therefore minimizes termination. This control over termination is the primary benefit of choosing ATRP. Another important feature of ATRP is that only one radical is formed upon activation. This is particularly important if surface-initiated polymerization is desired because this minimizes solution polymerization.

ATRP: Choosing a Ligand for the Catalyst

The catalyst (complex 2 in Figure 1) is a transition metal ion with coordinated ligands, and complex 3 is the oxidized form of the complex. (The difference between the two is that the oxidized complex 3 has the halogen from the initiator and a charge of one higher than complex 2.) A wide variety of transition metals have been reported to work with ATRP, including Ti,12 Fe,13-17 Co,18 Ni,19-21 Mo,22-24 Ru,25-27 Rh,28 Pd,29 Re,30 Os,31 but the use of Cu dominates the literature. To simplify the discussion, the rest of this article will refer to Cu.

The catalyst complex 2 abstracts the halogen from the initiator (or chain end) to activate the polymerization, so it has an important influence on the reaction rates of the equilibrium. The ligand choice will have a profound effect on kact and kdeact, which will cause a difference in the rate of polymerization. Several ligands are shown plotted along the ratio of (kact/kdeact) in Figure 2. 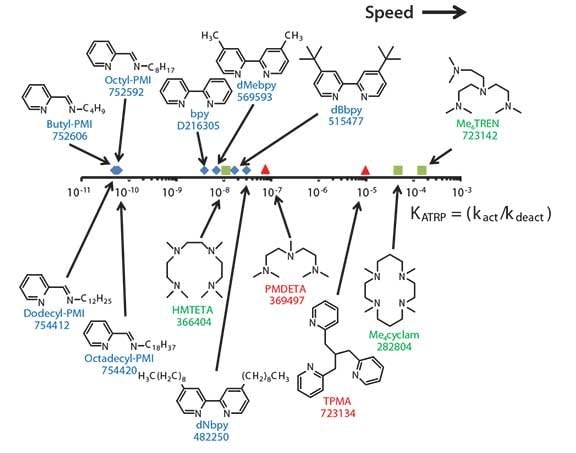 Figure 2.Nitrogen-based ligands plotted against the ATRP equilibrium constant (KATRP) with initiator EtBibb, in the presence of CuBr in MeCN at 22°C. Bidentate ligands are blue diamonds, tridentate ligands are red triangles, and tetradentate are green squares. Adapted from Tang, W. et al.32

Returning to Figure 1, the components that are added to the polymerization solution for normal ATRP are initiator 1, catalyst 2, and monomer 5. Catalyst 2 is oxygen-sensitive, so in an effort to minimize handling of this compound, several variations of ATRP have been developed. Newer “variations” of ATRP were developed primarily to generate the air-sensitive catalyst 2 at the start of the reaction rather than requiring it to be handled and added.

Detailing the competing reactions for all of these techniques is beyond the scope of this article; however, the following table summarizes the components added to perform the different ATRP reactions.

All of the newer ATRP variations eliminate the need to handle air sensitive Cu1+. ICAR, AGET, and ARGET methods utilize substantially lower concentrations of Cu catalyst over the other types. Table 2 summarizes the benefits and limitations of the various ATRP techniques:

The relatively high levels of residual Cu by traditional ATRP are problematic for biomedical and food packaging applications where it is required to minimize or eliminate toxins, such as heavy metals. Polymers generated by traditional ATRP contain substantial residual Cu catalyst if not properly purified. ICAR, AGET, and ARGET operate at low levels of Cu during polymerization and therefore need minimal subsequent purification for catalyst removal. These new versions of ATRP enable their utility to prepare well-defined copolymers for these high value applications.

The appropriate ATRP technique can be chosen based on the needs of the application. Figure 2 can be used to select a ligand based on catalyst activity; however, the effect of the ligand on the resulting molecular weight distribution is not illustrated. The plot of the KATRP vs. kdeact is shown in Figure 3 and illustrates catalyst activity as a function of control over the polymerization.32 Wei Tang and co-workers developed this plot which shows the PDI better correlates to the rate of deactivation kdeact rather than the value of KATRP found in Figure 2.32 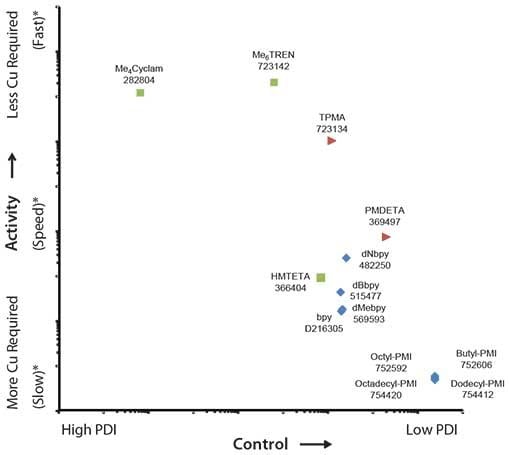 Figure 3. The equilibrium constant KATRP plotted against kdeact illustrates the correlation between catalyst activity and control. This should only be used as a reference, and was adapted from Tang, W. et al.32 Each ligand is labeled with an acronym as well as the product number. Bidentate ligands are represented by blue diamonds, red triangles represent tridentate ligands, and green squares represent tetradentate ligands.

*At a given concentration of catalyst, the activity axis shows the relative speed of the polymerization reaction.

The perfect ATRP catalyst would be both fast and well controlled, but this figure can help illustrate the relationship. If minimizing copper concentration is the highest priority, then selecting catalysts from the top of Figure 3 would be ideal. If a narrow distribution of chain lengths (low PDI) is the highest priority, then the ideal catalyst would be selected from the right side of the Figure 3.

The various ATRP techniques provide an opportunity to select a polymerization environment that is well suited to meet applicationspecific needs. When used in combination with the ideal catalyst for a given polymerization, well-defined polymers can be conveniently prepared.