Transdermal delivery is commonly used for delivering active skin care compounds. Development of effective sunscreens is a focus of skin care research, given that proper use of sunscreens can prevent occurrence of multiple skin ailments, such as melanomas, wrinkles and sunburns. For sunscreens to be useful in protecting against damaging ultraviolet (UV) rays, the active compound in the formulation should stay on the skin surface instead of penetrating the skin. Once a compound penetrates the skin, the compound can no longer exert its UV-protective effect.

Avobenzone and octocrylene are two commonly used sunscreen actives. Because there are always concerns about skin absorption of these compounds in their formulated forms, sunscreen developers typically perform in vitro transdermal diffusion studies using human skin as a model. In particular, octocrylene is known to penetrate into skin, wherein it acts as a photosensitizer, leading to DNA damage and malignant melanomas.

There are several barriers to using human skin for in vitro diffusion studies. Human skin is plagued with high lot-to-lot variability, and samples are expensive and not easy to obtain. Use of human tissue also poses experimental challenges, such as poor stability, sensitivity to storage conditions, biohazard concerns and disposal costs. Chromatographic analysis of actives. High performance liquid chromatography coupled with a diode array detector (HPLC-UV) was used for analysis and quantitation of avobenzone and octocrylene.

As expected, very low amounts of avobenzone and octocrylene were observed in the receptor fluid when formulation A was tested using the vertical Franz cell arrangement. Avobenzone and octocrylene showed very similar diffusion properties when compared between Strat-M® membrane and human cadaver skin (Figures 2 and 3). In the case of avobenzone, the cumulative amount diffused was between 20 and 70 ng/cm2, while in the case of octocrylene, the cumulative amount was between 5 and 20 μg/cm2. For both these compounds, the diffusion profile between human skin and Strat-M® membrane was very similar, indicating the utility of Strat-M® membrane as a screening tool for transdermal diffusion studies in the development of cosmetic products.

Figure 2.Diffusion of unencapsulated avobenzone through human skin and Strat-M® membrane (Formulation A). Figure 3.Diffusion of octocrylene through human skin and Strat-M® membrane (Formulation A). 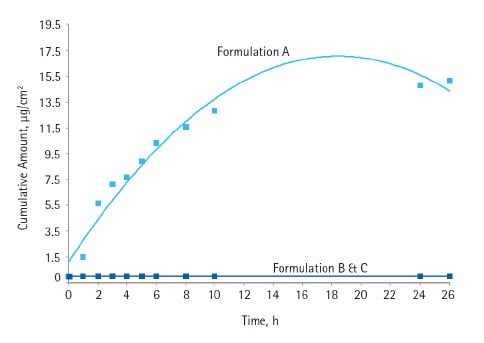 Encapsulation of an active ingredient in a formulation can be crucial for modulating delivery of the active. In formulations, encapsulation can reduce the diffusion of sunscreen actives through skin, thereby increasing their screening activity as well as reducing potential toxic effects of diffusion.

We conclude that, for screening formulations for effectiveness of encapsulation on reducing transdermal diffusion of skin care actives, the use of a synthetic membrane model is a reliable, inexpensive, easy-to-handle alternative to human or animal skin.