Campylobacter spp. are regarded as the leading cause of bacterial gastroenteritis in humans worldwide. Infections are usually caused by consuming cross-contaminated or insufficiently processed food (typically red meat, poultry, shellfish and unpasteurized milk). There is an increasing demand for Campylobacter testing in food to meet new regulations regarding contamination levels in poultry.

The two species Campylobacter jejuni and C. coli are responsible for the majority of human food-borne infections in the UK. In 2008 there were 49,880 reported cases of Campylobacteriosis in England and Wales (www.hpa.org.uk). Currently C. jejuni is known to account for approximately 90% of all reported cases. C. coli, accounting for 7-10% of the Campylobacteriosis cases, is still the fourth most common cause of gastrointestinal illness in England and Wales and therefore remains a significant health burden.

Human food poisoning is acquired through the consumption of contaminated food. Poultry is a major food source of infection and infection can occur through the consumption of undercooked poultry meat or through cross-contamination of other food products in the kitchen. In a recent report from the Food Standards Agency the prevalence of Campylobacter in chicken at retail was 65.2% (www.food.gov.uk). Other sources of infection include contaminated raw milk and water.

Symptoms of the disease can occur up to two weeks after consuming the contaminated food. They usually consist of a fever and general feeling of unwellness which is accompanied or followed by abdominal cramps and then watery, sometimes bloody, diarrhoea (Blaser and Engberg 2008). The disease is usually self-limiting after 2-7 days; however, in some cases, particularly in the very young, elderly or immuno-compromised, antibiotic treatment may be required. In more severe cases, hospitalization may result.

The mechanisms utilised by Campylobacter to cause disease are not yet fully defi ned. However, it is thought that the organism first colonises the small intestine before travelling to the large intestine, where it causes a local inflammatory response (Black et al. 1988). The organism is motile by way of polar fl agella and it can propel itself through the mucous layer on top of the epithelial cells. Adhesion to the surface of the epithelial cells followed by invasion into the cells is also thought to occur before the onset of diarrhoea. Campylobacter does produce a cytolethal distending toxin, however the role of this toxin in disease is not fully characterized (Ketley 1997).

C. jejuni and C. coli are Gram negative, spiral, rod shaped cells (Figure 1). They are microaerophilic, requiring oxygen levels between 2 and 10% for growth. These two species are classed as thermophilic campylobacters as they have an optimum temperature for growth of 42 °C. Campylobacter can often be a diffi cult organism to isolate and grow in the laboratory. The current method used for detection of campylobacters from foodstuff s is the EN/ISO 10272-1 method. This method relies on homogenization of a known amount of material in Bolton Broth (BB) with selective supplement and 5% lysed horse blood either microaerobically or in a Schott bottle fi lled with Bolton enrichment broth (leaving a gap at the top of no more that 2 cm) aerobically at 41.5 °C for 48 hours. However in a recent publication (Moran et al. 2009) a change to the ISO method was recommended, as it was found that aerobic incubation during enrichment was not very successful in isolation of the organism. Therefore, microaerobic enrichment was suggested as the preferred method, with incubation for 24 hours being suffi cient. Following incubation, a sample of the enrichment broth is then plated onto modifi ed charcoal cefoperazone deoxycholate agar (mCCDA, see Figure 2) with the addition of a selective supplement. Identification is usually done by colony morphology and speciation by PCR-based methods. 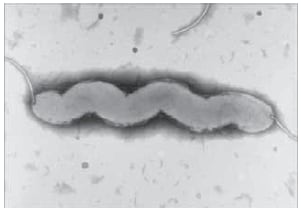