Post-translation modifications (PTM), such as oxidation and deamidation, can have serious consequences on therapeutic monoclonal antibodies. Peptide mapping is a widely used method for the identification of site- specific PTMs, but typical protein digestion workflows often end up introducing significant amounts of artifacts. Hence, to obtain an accurate assessment of the modifications, it is critical to reduce the artifacts that occur during sample preparation steps. This study used NISTmAb as a model monoclonal antibody to demonstrate an optimized peptide mapping protocol resulting in minimal artificial asparagine deamidation and methionine oxidation. The protocol utilizes shorter incubation times and an improved digestion buffer, allowing for complete sample preparation in less than six hours.

The development, production, and storage of therapeutic mAbs must be monitored for post-translational modifications (PTMs), to assure consistent quality and safety. PTMs such as deamidation and oxidation are known to influence the efficacy, safety, and stability of therapeutic monoclonal antibodies (mAb).1,2 Deamidation of asparagine (ASN or D) and the oxidation of methionine (Met or M) are major chemical degradation pathways for protein therapeutics and have been studied extensively.3,4,5 Asparagine residues can form a succinimide intermediate that subsequently hydrolyzes into isoaspartic or aspartic acid (Figure 1A).6,7 Whereas, hydroxyl radicals can oxidize methionine residues to form methionine sulfoxide (Figure 1B).8,9 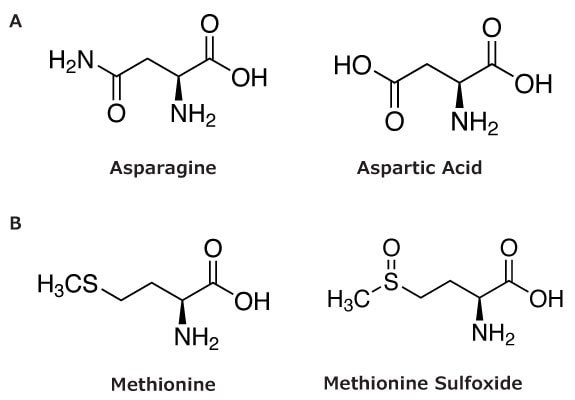 LC-MS based peptide mapping is the method of choice for measuring the relative abundance of PTMs. The sample preparation prior to the LC-MS analysis involves three steps including denaturation/reduction, alkylation, and digestion. The digestion of different mAbs produces different peptide fragments having a wide range of sizes ― from single amino acids to longer polypeptides. Since these peptides vary widely in their hydrophobicity, reversed-phase (C18) is the preferred mode of chromatography for peptide mapping.

The conventional trypsin digestion of monoclonal antibodies is lengthy, involving an overnight digestion step. The conditions and reagents used in this step are known to induce artifactual deamidation and oxidation of the mAb sample, leading to inaccurate measurement of PTMs.10 The first part of this paper compares methionine and asparagine deamidation between conventional trypsin digestion and an optimized digestion protocol that takes less than six hours to complete. The second part compares the optimized protocol with the protocol published by NIST. All LC-MS analyses were carried out using C18 columns with superficially porous particles (BIOshell™ A160 Peptide C18). 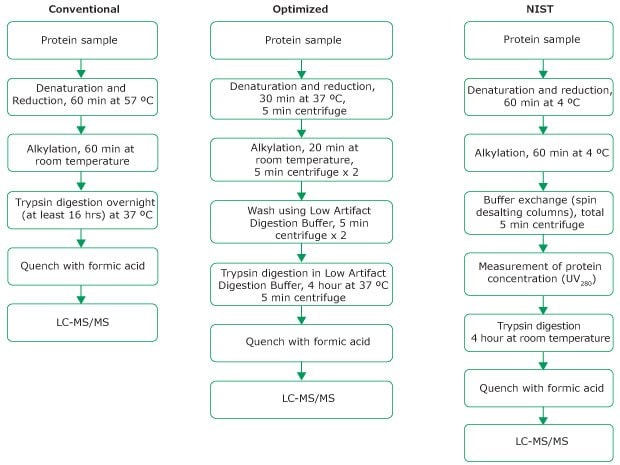 Figure 2.Summary of digestion protocols used in the study

The conventional protocol uses sodium deoxycholate (60 mg) in methanol (1 mL) as the denaturation solution. 20 mM TCEP (tris(2-carboxyethyl)phosphine) and the denaturation solution were mixed in 1:1 (v/v), to which 20 µL of dried down sample was added and incubated at 57 ºC for one hour. The sample was brought back to room temperature and centrifuged at 14,000 x g per gram for 30 seconds. This step was followed by the alkylation step using 5 µL of 200 mM iodoacetamide (in 50 mM ammonium bicarbonate) and subsequent incubation for one hour in the dark at room temperature. Digestion was carried out by adding enough trypsin solution (trypsin in 50 mM ammonium bicarbonate) to have an enzyme:protein ratio of 1:20 and incubating at 37 ºC overnight (at least 16 hours) on a thermo-shaker. 2 µL neat formic acid was used to quench the digestion.

Detailed procedure for the optimized protocol is described in the technical bulletin for Low Artifact Digestion Buffer.11 A NIST12 paper describes the protocol provided by NIST. The reagents used in each protocol are shown in Table 1.

Table 1. Reagents used in the protocols of the study.

The raw MS files were subjected to BioPharma Finder™ 3.0 (Thermo Fisher Scientific) for peptide mapping. The peptide identifications were performed by searching the processed data against the NISTmAb sequence-based accurate mass of a full mass scan and assignments of product ions in MS/MS spectra. The data was filtered to report only the peptides with a mass tolerance of ±10 ppm. The percent deamidation and oxidation were calculated by BioPharma Finder software using the mapping tab. Also, the result was manually checked by creating the extracted ion chromatograms (XICs) for unmodified and modified peptide within 10 ppm mass error. Equations 1 and 2 were used to calculate the percent modification (oxidation, deamidation) and percent missed cleavage (% MC), respectively.

Peptide mapping using LC-MS has become a routine analysis in the development and manufacture of therapeutic mAbs. Traditional sample preparation procedures used prior to LC-MS are often cumbersome. These procedures generally involve chemical denaturation, reduction and alkylation, buffer exchange, and overnight protease digestion of the protein sample at elevated pH and temperature. Asparagine deamidation and methionine oxidation take place during these various steps, the extent of which depends on the conditions such as reagents used, ionic strength, temperature, pH, incubation time, digestion buffer, and presence of trace metals (in the case of methionine oxidation).7 A simpler, shorter method with minimal artifacts is certainly desired to obtain accurate endogenous levels of deamidation and oxidation.

Figure 3A is the base peak chromatogram of tryptic digested NISTmAb, showing examples of typical tryptic peptides used to measure the levels of Met (M) oxidation and Asn (D) deamination in this work.

Figure 3B is the extracted ion chromatogram and MS spectrum of the peptide DTLMISR (tR = 51 min) and the peptide with an oxidized methionine residue (position HC:M255), tR = 44 min. The oxidation of methionine rendered the molecule less hydrophobic, thus less retentive on the BIOshell™ A160 Peptide C18 column.

Figure 3C is the XIC and MS spectrum of the peptide GFYPSDIAVEWESNGQPENNYK (tR 88.90 min) and the deamidated peptide (position HC:N387). The deamidated forms (isoASP and ASP) elute before and after the unmodified peak at ~87.91 and 91.92 min, respectively. 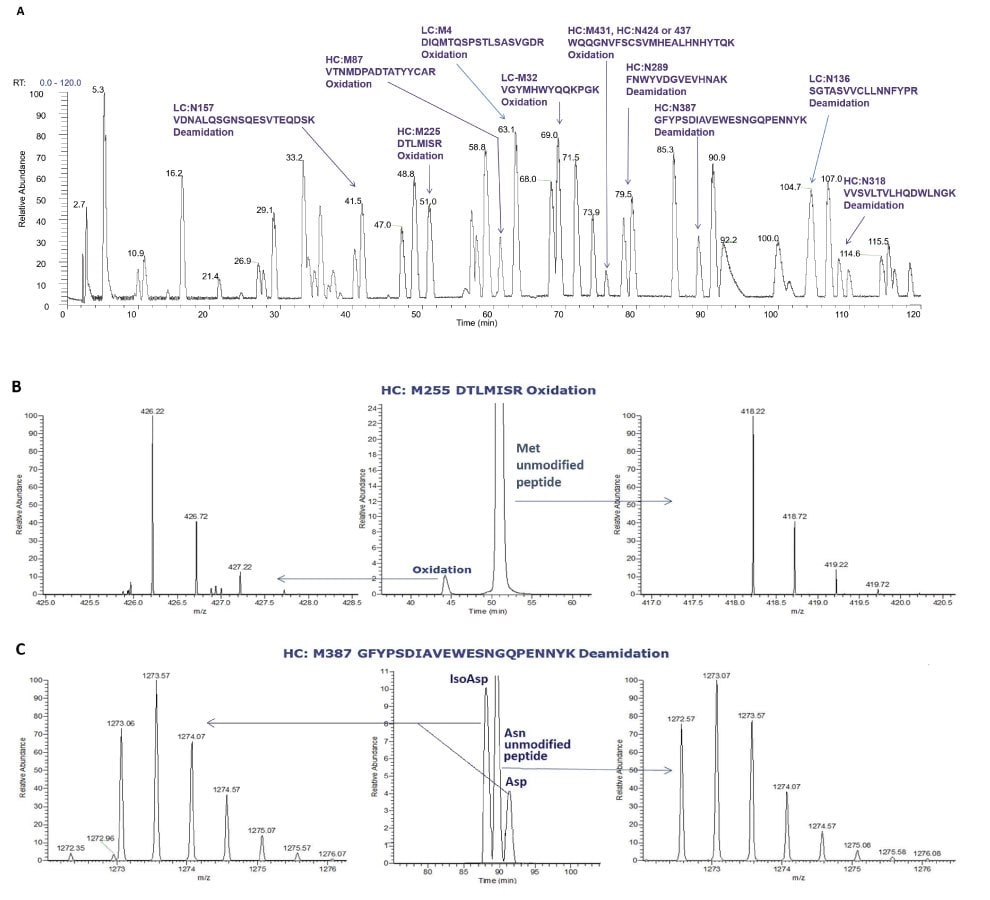 With the optimized protocol, digestion took only four hours. The digestion buffer used was specifically developed to minimize deamidation and oxidation during the digestion step without sacrificing the digestion efficiency. The buffer was formulated at an optimal pH and contained a proprietary antioxidant.

In both protocols, the protease used was SOLu-Trypsin, a proprietary formulation of recombinant Trypsin (porcine sequence expressed in Pichia pastori) and stable in solution when refrigerated. The deamidation levels between the protocols were extremely different at the two sites (Figure 4A). The biggest difference was observed at site HC:N387, where deamidation was 41.1% for the conventional protocol and 0.6% for the optimized one. At site HC:N318, a 21.2% deamidation was observed for the conventional protocol and none was observed for the optimized protocol. These results are not surprising. It is well known that the incubation times of protein samples in the denaturing/reduction and alkylation steps, and to a larger extent, the length of digestion, are directly proportional to the levels of artificial modification.13 It has been reported that deamidation artifacts are reduced at lower temperatures;14 in the conventional protocol, the denaturation/reduction step was carried out at an elevated temperature (57 ºC).

The difference in % oxidation was not as high as observed for deamidation. At site LC:M32, the conventional protocol had 2.9% higher oxidation than the optimized protocol, and it was 4.2% higher at site HC:M255 (Figure 4B).

Figure 4.Levels of (A) Asn deamidation and (B) Met oxidation of NISTmAb tryptic peptides using the conventional and optimized protocols.

In 2018, NIST published a paper wherein they described the development of a tryptic digestion protocol used for peptide mapping. Their study focused on parameters such as buffer concentration, digestion time and temperature, and the source and type of trypsin used.12 (See Figure 2 for the outline of the protocol and Table 1 for the reagents used.)

Figure 5.Comparison of base peak chromatograms of tryptic digested NISTmAb using the (A ) optimized and (B) NIST protocols. Missed cleavage peptides are labeled with a red asterisk (*).

The average percent missed cleavage was 16% for the optimized protocol and 35% for the NIST protocol (Figure 6). 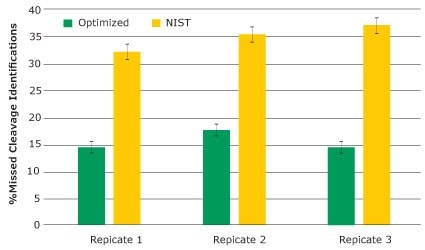 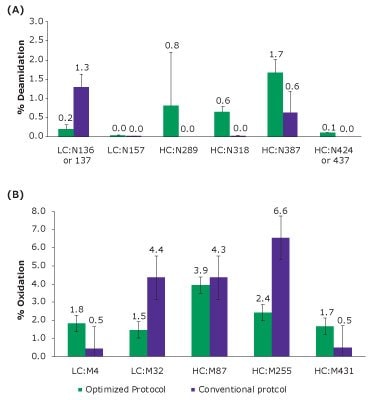 Figure 7.Levels of (A) Asn deamidation and (B) Met oxidation of NISTmAb tryptic peptides using optimized protocol and NIST protocol.

The denaturation/reduction and alkylation steps were carried out at a very conservative temperature (4 ºC) with incubation times much longer than the one for the optimized protocol. In addition, the protocol required a buffer exchange step (into the urea containing digestion buffer) before the tryptic digestion. Overall, the NIST protocol requires more time for reagent and sample preparation compared to the optimized protocol.

It is important to note that the HPLC conditions are also critical for the study. To enhance resolution and sequence coverage, two BIOshell™ A160 Peptide C18 15 cm x 1.0 mm columns arranged in series were used to provide for a total effective column length of 30 cm. Hydrophilic peptides with less than five amino acids such as VDK, TISK, EYK that typically elute in flow-through, could be retained on the longer column and be subsequently analyzed by mass spectrometry. In addition, the BIOshell™ columns are composed of superficially porous particles (SPPs) containing a solid, nonporous silica core with a porous silica outer layer, providing higher separation efficiency. This particle attribute results in a narrower peak width and improved resolution of the peptide analytes.

Together with the optimized gradient conditions shown in the experimental section, a good separation of the unmodified and modified peptides was achieved. This result is well illustrated in Figure 3B, where the unmodified DTLMISR peptide and the peptide with oxidized Met were well resolved, allowing for accurate quantitation of each species.

The optimized protocol gave significantly lower levels of Asn deamidation compared to the conventional protocol, particularly at two sites, HC:N387 (over 40% lower) and HC:N318 (over 20% lower). The levels of oxidation (<5%) and deamidation (1.5 %) were comparable with the NIST protocol. In addition, more missed cleavage peptides were observed with the NIST protocol (35%) compared to the optimized protocol (16%). The optimized protocol also offers the advantage of allowing complete digestion in less than 6 hours, with minimal deamidation and oxidation artifacts. The use of two BIOshell™ A160 Peptide C18 (15 cm) columns in series allowed the successful separation of peptides in the tryptic digestion.