What Are Biological Buffers?

Biological buffers are organic substances that maintain a constant pH over a given range by neutralizing the effects of hydrogen ions. Buffers are commonly used in biochemical, biological and environmental studies to maintain or control the acidity of a solution within a desired physiological range, or even initiate a particular reaction. The pH of substances not only affects the rate and efficiency of chemical reactions, but also impacts the recovery and purity of products. In biological studies, the pH has an effect on the structure and function of proteins, enzymatic reactions and cellular metabolism. Therefore, buffers significantly contribute to the outcome of such studies. The most widely used buffers in biological studies are zwitterionic N-substituted amino acid derivatives, also referred to as biological buffers or Good’s buffers.1,2

Although none of the biological buffers fulfills all of the requirements below, they are expected to satisfy the majority of them:

Reproducibility refers to the ability to produce the same results in research experiments using the exact same materials and procedures. Reproducing the original results of published discoveries is crucial for the biomedical research community in order to make conclusions and explore new areas of research, which can translate into therapeutic applications. Ultimately, such lost time and opportunities negatively impact the discovery of life-saving therapies and cures.

However, reproducible research has long been a major challenge in the scientific community, as many researchers rely on existing basic research information to conduct further studies, which may not be reliable and can lead to faulty assumptions and significant losses of time and money. Leonard P. Freedman, President of the Global Biological Standards Institute, and co-authors published a paper “The Economics of Reproducibility in Preclinical Research” in 2015 that estimates a shocking $28 billion are spent each year on preclinical medical research that cannot be reproduced.

Research reproducibility failure and follow-on research based on flawed premises not only wastes resources and funds it may also affect the reputation and career prospects of researchers and research institutes, and may have a negative impact on the journal reputation and readership.

Several recent publications have highlighted the issue of low reproducibility rate in preclinical research. In 2012, scientists from Amgen reported that they were only able to reproduce 6 out of 53 ‘landmark’ preclinical studies, which resulted in more discussions among the scientific community regarding the scale of the reproducibility problem and the development of initiatives to overcome this problem.

In general, irreproducibility can be caused by study design, the inaccuracy of the laboratory protocol, poor data analysis and reporting, and the unsuitability of biological reagents and reference materials used.3 The image below illustrates the key sources of irreproducibility and the magnitude of this crisis.

Sources of Irreproducibility - The Cost is High 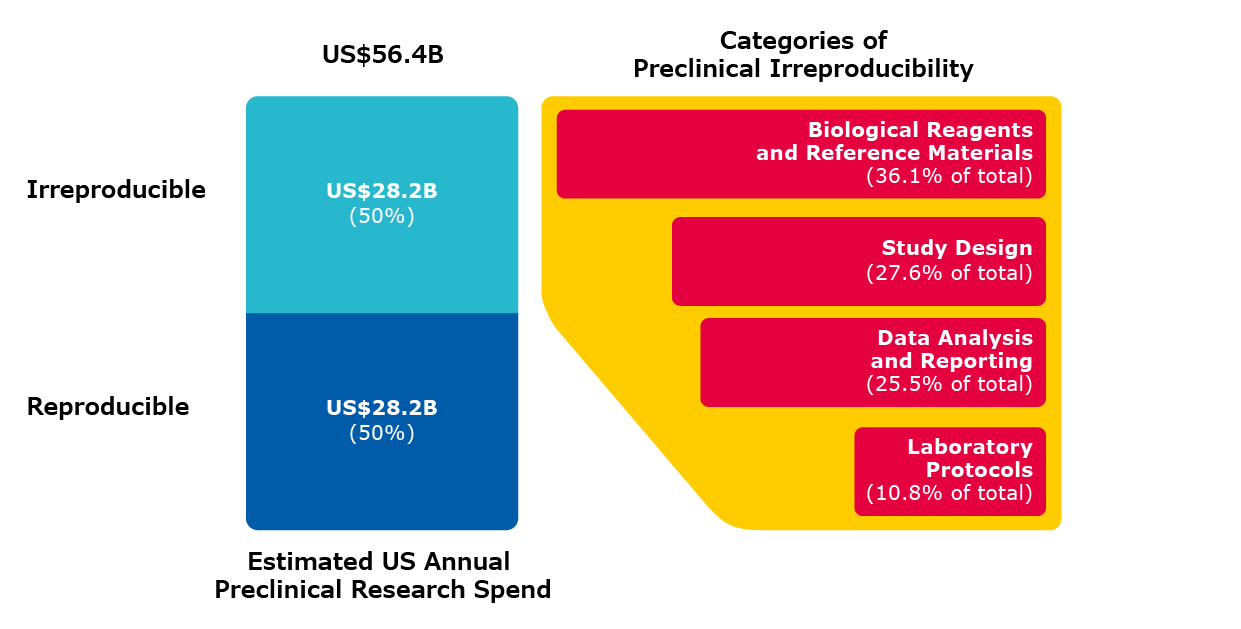 Figure 1. Estimated US preclinical research spend and categories of errors that contribute to irreproducibility. [Note that the percentage value of error for each category is the midpoint of the high and low prevalence estimates for that category divided (weighted) by the sum of all midpoint error rates]

The “Second Annual State of Translational Research” survey was conducted in 2014, where participants answered questions about which product groups caused the most difficulties with research reproducibility. The results of this survey revealed that animal models, antibodies, cell lines, PCR reagents and primers, cell culture reagents, fluorescent tags, dyes, buffers and solvents were of major concern.

Buffers are widely used in a range of protocols and applications in basic research, industrial pharmaceutical and biopharmaceutical markets. Variability in the selection and quality of these buffers can have a significant impact on research reproducibility. Therefore, there is a great need for better understanding and training on their selection and use.

Most biological processes are pH-dependent and any minor change in pH can lead to variation in the biological function, biomolecule stability and the outcome of the experiment. The main purpose of a buffer in a biological system is to resist change in pH due to internal and external influences and maintain intracellular and extracellular pH within a narrow range.

Potential obstacles with buffers can be classified into two categories:

a. Lot-to-lot variability with buffer

b. Interactions with biological systems

Although biological buffers are assumed to have minimal interaction with the metal ions present in environmental and biological systems, several studies have recently indicated otherwise. Therefore, it is essential to comprehend how these buffers interact with metal ions and other biological materials, such as proteins.

For example, any enzyme that requires metal ions for its activity may be inhibited if the buffer that is being used forms an insoluble complex with those metal ions. Complexes should, therefore, be soluble and their binding constant known. Phosphates form insoluble salts with bivalent metals and precipitate. Therefore, a phosphate buffered salt (PBS) solution is never autoclaved with Ca2+ or Mg2+. Biological buffers, such as PIPES, TES, HEPES and CAPS, have very low metal-binding constants and are particularly suited to investigate metal-dependent enzymes. However, Bis-Tris Propane, ADA and Tris all interact strongly with various metal ions.

Below is an overview of complexation magnitude strength among the different metal-buffer pairs2 : 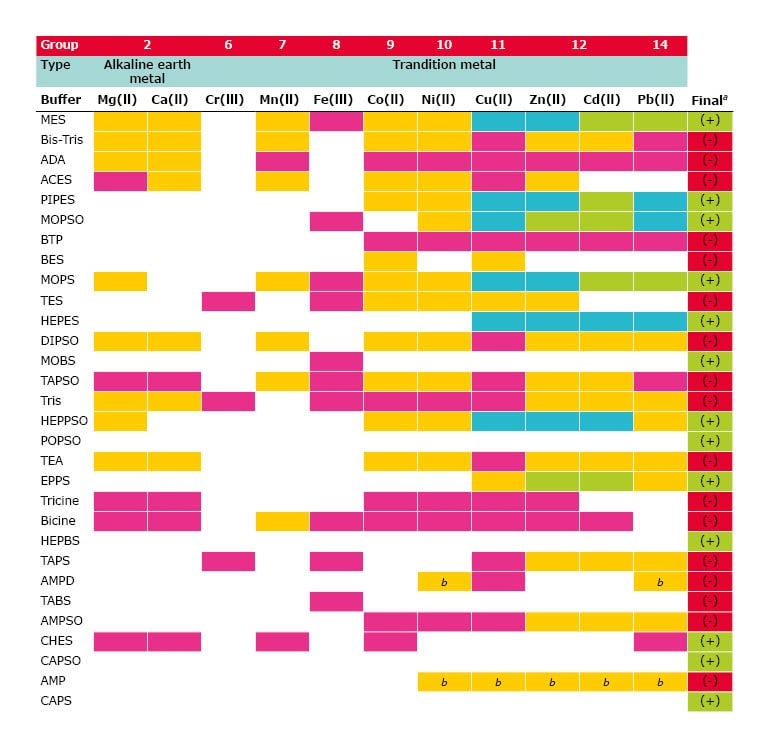 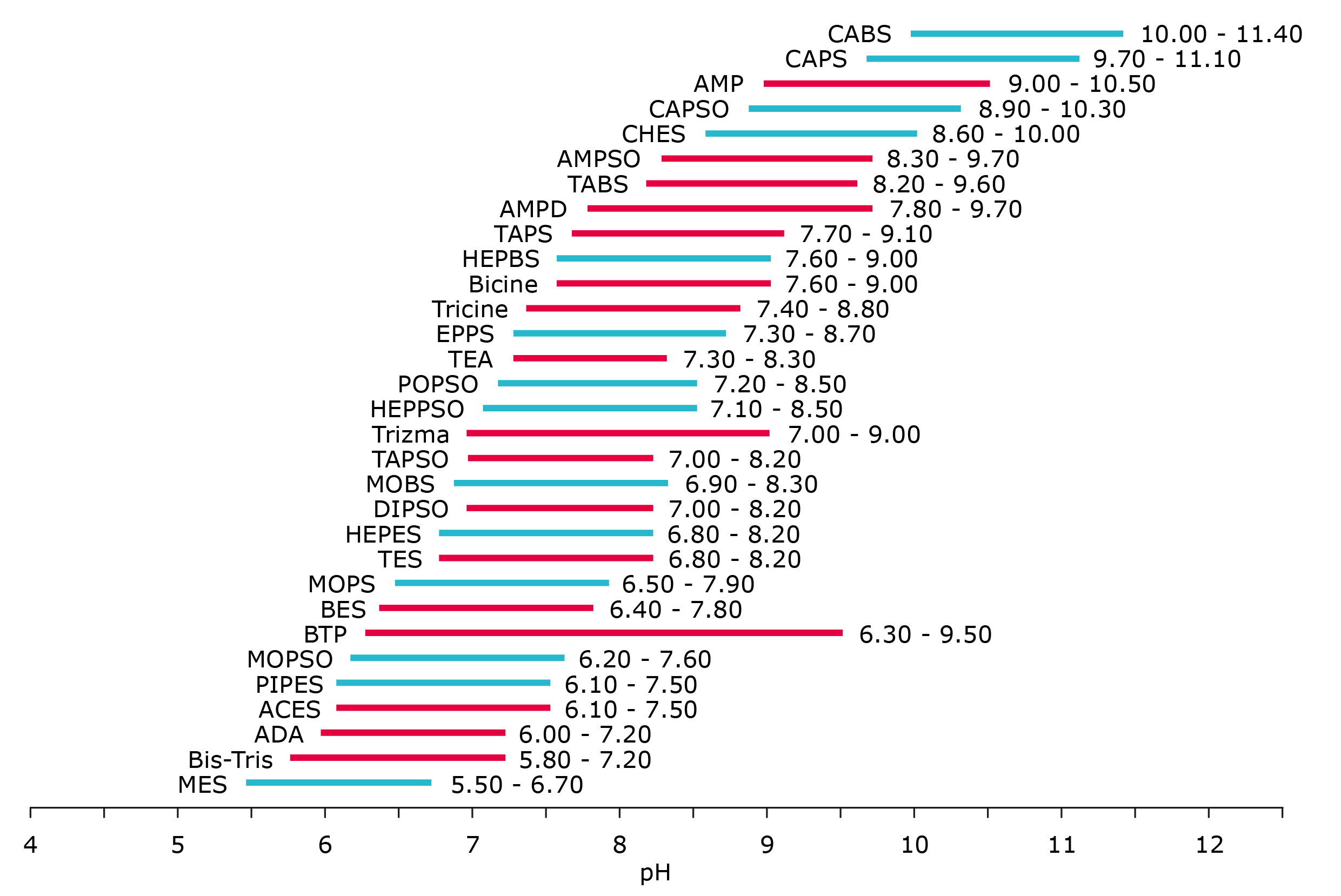 This simplified chart shows the pH ranges for the various biological buffers. The cyan and red colors indicate whether or not the buffer is suitable for general use. The buffers in red should be used with caution when metals are employed or present in the biological system.

Such metal interactions can have an impact on:

Thus, it is crucial to consider these properties while selecting an appropriate buffer for a particular experiment.

We have a broad range of biological buffers. The interactive buffer selection guide supports you in finding the right buffer according to pH, grade, packaging type, or application.

We are a primary manufacturer of high-quality biological buffers and has in-depth scientific knowledge, analytical capabilities and technical support for these essential products. With 25+ years of manufacturing experience, we are a strong, stable supplier with multiple, dedicated buffer manufacturing facilities to fulfill research and bulk orders (quantities ranging from a few grams to multi-metric tons). Moreover, we are ISO 9001:2008 certified and have controlled systems compliant with GMP or M-Clarity level to provide batch-to-batch consistency and supply chain transparency.

Knowing that there are potential concerns with the use of biological buffers, it is important to turn our attention to some of the practical tips that can be grouped into 3 main areas. 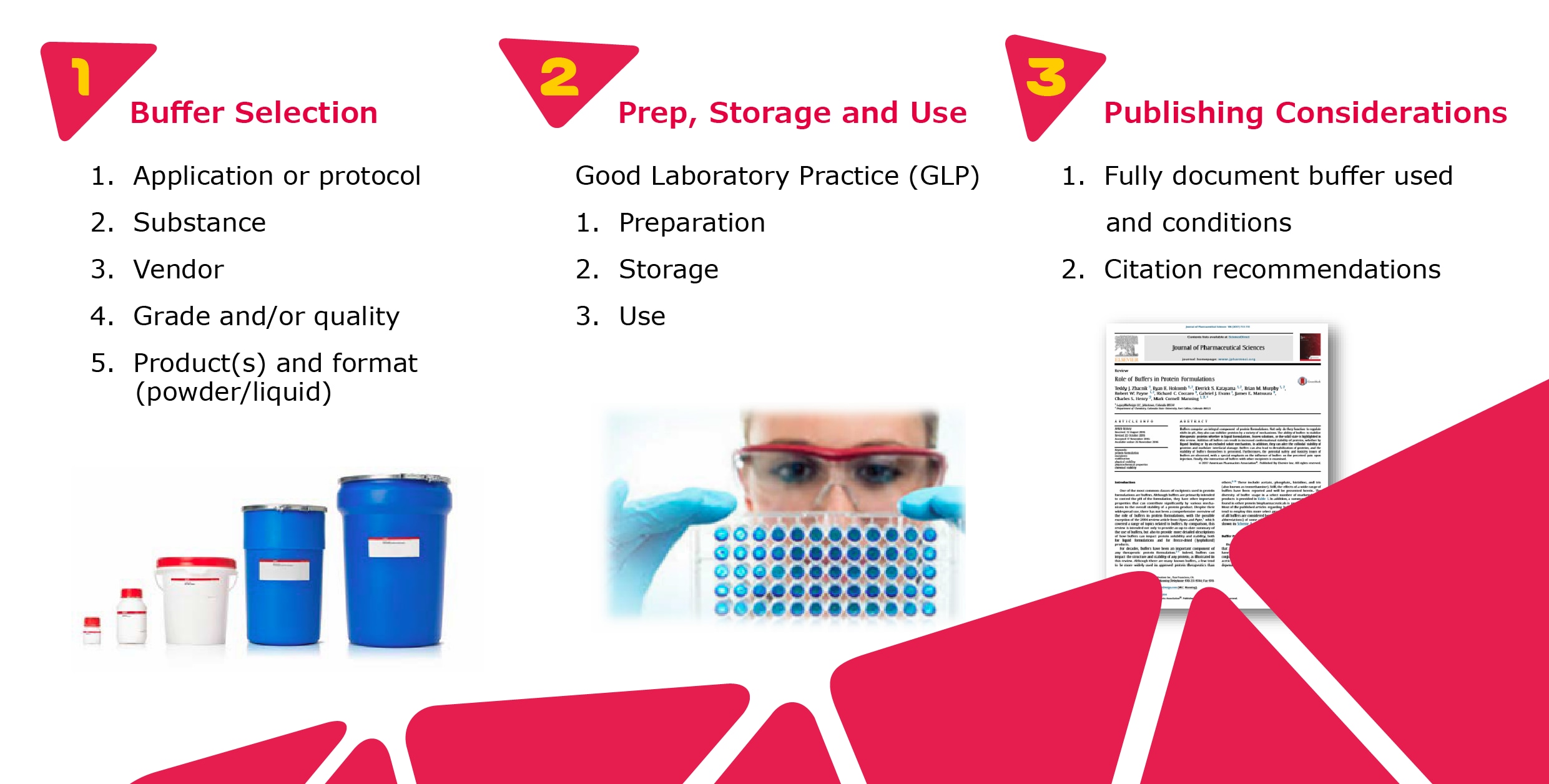 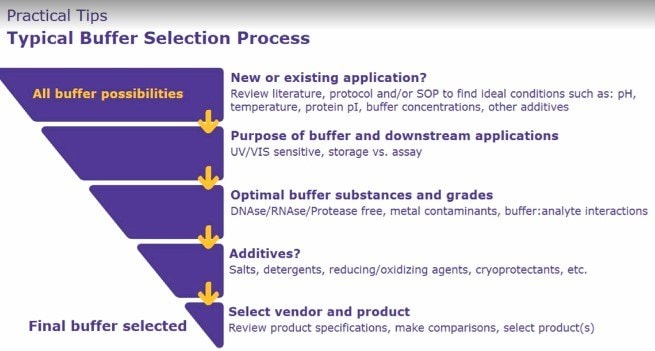 The table below illustrates the various buffer grades, according to the type of downstream application.

2. Tips on Buffer Preparation, Storage and Use:

These are general recommendations and depend on the application, industry, regulatory environment, and other factors.

We have researched and developed a useful reference guide, which is an interactive buffer table with information about the useful pH ranges for each buffer, the working concentrations of the buffer, adverse metal ion interactions, pKa changes with temperatures, a variety of products or grades offered for that substance and also the intended applications.

Our aim is to solve the toughest problems in Life Science by collaborating with the global scientific community. By addressing and spreading awareness on research reproducibility issues, we hope that we can help researchers to overcome their hurdles in scientific investigations.