Autoimmune diseases result from an overactive immune response against substances and cells normally present in the body. They include more than 80 widely varied chronic illnesses that affect 5-7% of the population, about two thirds of which are women. The symptoms affect almost every human organ system, including the nervous, gastrointestinal, endocrine, circulatory systems, as well as connective tissues and eyes. As a group they are the least understood diseases, but the common underlying problem is the misdirection of the body’s immune system to attack the very organs it was designed to protect. It is suspected that these diseases have genetic pre-disposition, but are triggered by an infection.

The human immune system protects the body against infection either by generating antibodies against foreign substances or by producing cytotoxic T cells that have receptors that recognize the surfaces of invading or infected cells. In other words, infection is followed by production of new proteins in the human body. Detecting and identifying these proteins can, therefore, yield valuable information for both diagnosis and treatment of autoimmune diseases.

Among the most attractive diagnostic strategies is to identify the protein epitopes that bind to the antibodies of patients with varying autoimmune diseases. Peptide-based microarrays can then be created to screen any or all of the antibodies potentially present in the patients. In order to increase coverage, the peptide microarray has to include a large number of known epitopes. This in turn requires a platform such as the PEPscreen®, which has the capacity of synthesizing a large number of peptides in small quantities.

The aim of this project was to develop and standardize a peptide microarray platform to screen small quantities of patient antibodies. Peptide epitopes would be immobilized onto an inert surface and probed with antibodies that are known to bind to these peptide epitopes. The initial strategy was to synthesize a series of peptides that included not only the actual epitope, but also different combinations of the epitope with flanking sequences that might enhance solubility and epitope recognition on the array surfaces. The epitope used in this model study was the FLAG® sequence (DYKDDDDK), which was modified into different variants. The peptides were spotted on a SuperEpoxy array surface. 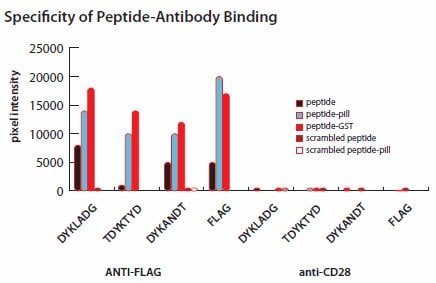 Figure 1 also shows that peptides containing additional sequences from both PIII and GST demonstrated enhanced reactivity with ANTIFlag antibodies, perhaps due to improved solubility or surface binding properties on the array. Adding PIII or GST sequences to the peptides did not enhance reactivity to the irrelevant antibody.

These results show that peptide-based microarrays can be spotted onto an inert surface and still be specifically recognized by small quantities of appropriate antibodies. From these initial results a larger peptide microarray can be constructed to cover a wider array the epitopes recognized by the antibodies in patients with autoimmune diseases.