Inflammation and Cancer: the NF-κB Connection

Chronic inflammation is an underlying factor in the development and progression of many of the chronic diseases of aging, such as arthritis, atherosclerosis, diabetes, and cancer. Oxidative cellular stress induced by environmental factors, such as cigarette smoke, UV or ionizing radiation, bacterial or viral infection, or any number of oxidizing xenobiotic compounds, triggers a wide range of cellular responses, some of which are proinflammatory and proapoptotic, while others protect the cell against apoptosis and enhance cellular adhesion, cell proliferation, and angiogenesis. The inappropriate induction or constitutive activation of these protective responses in mutated or damaged cells appears to be a major factor in the transformation and proliferation of cancer cells.1–5

Two nuclear transcription factors that are involved in mediating the cellular responses to oxidative cell stress and proinflammatory stimuli are activator protein-1 (AP-1) and nuclear factor-κB (NF-κB). The role of these transcription factors on cancer initiation and progression has been studied in cell culture and in vivo models.5,6 The activation of two AP-1 components, c-Jun and c-Fos, by JNK and by ERK1/2 or p38 MAPK, respectively, is involved in the malignant transformation of cells stimulated by the tumor promotor phorbol 12-myristate 13-acetate (PMA). The proinflammatory and antiapoptotic response to tumor promotion is primarily mediated through activation of NF-κB by the IKK family of serine/threonine kinases. The following discussion will focus on the NF-κB pathway as a target for cancer chemotherapy and chemoprevention. 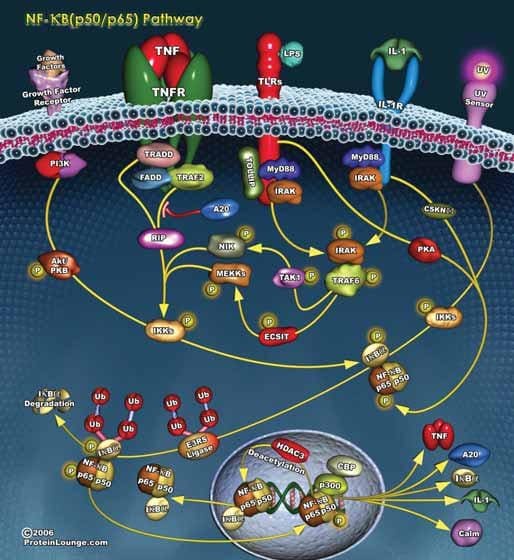 NF-κB refers to a family of transcription factors that has been highly conserved through evolution and is present in the cytoplasm of all cells. NF-κB has been called a “stress sensor” because its activity is induced by a wide variety of stimuli,7 including tumor necrosis factor (TNF-α), PMA and other tumor promoters, cigarette smoke extract (CSE), lipopolysaccharide (LPS), oxidants, and pathogenic bacteria. The NF-κB family comprises five members: p50 (NF-κB1), p52 (NF-κB2), RelA (p65), RelB, and c-Rel. p50 and p52 are cleaved from inactive precursor proteins, p105 and p100, respectively, prior to translocation to the nucleus. NF-κB family members are characterized by having:

Cytoplasmic NF-κB is sequestered as an inactive complex with its regulatory subunit, IκB. The most abundant member of the IκB family of proteins is IκBα. Phosphorylation of two conserved serine residues in the N-terminal domain of the NF-κB/IκB complex induces the rapid dissociation and polyubiquitination of IκB followed by its degradation by the 26S proteasome. Activated NF-κB translocates to the nucleus where specific subunit lysines are acetylated by SRC-1 and p300 histone acetyltransferases. Acetylation promotes DNA binding and NF-κB-induced gene transcription.10 A list of more than 200 proteins that are regulated by NF-κB is given by Ahn and Aggarwal.7 Many of the genes regulated by NF-κB code for inflammatory cytokines and proteins that mediate cell survival, cellular adhesion, cell cycle activation, cell proliferation, angiogenesis, and oncogenesis. However, not all the actions of NF-κB promote cell survival. Activation of NF-κB also appears to be essential for p53-induced apoptosis in response to oxidative stress or to the anticancer agents, doxorubicin and etoposide.2,11

Activation of NF-κB via Phosphorylation

There are two mechanisms by which the NF-κB-induced gene transcription is terminated. Genes coding for IκB complex proteins are upregulated by NF-κB. Newly formed IκBα subunits can enter the nucleus where they bind to and inactivate NF-κB, and the NF-κB/IκBα complex is exported back to the cellular cytoplasmic compartment.9 Alternatively, the translational action of DNAbound NF-κB can be terminated by deacetylation of the p65 subunit at Lys310 by the histone deacetylases SIRT1 or HDAC1.10,21 Inhibition of p300 histone acetyltransferase or the overexpression or activation of SIRT1 has been shown to inhibit NF-κB-mediated gene expression.10,22 Conversely, decreased histone deacetylase level or activity has been shown to increase the expression of inflammatory cytokines, presumably through enhancement of NF-κB-mediated gene transcription.23

NF-κB and its Relationship to Disease

Altered regulation of NF-κB activity is observed in many genetically- linked diseases and chronic diseases of aging, including cancer.7,9 NF-κB activation has been linked to inflammation-driven tumor promotion and progression. In addition, many solid and hematopoietic cancers express constitutively active NF-κB that contributes to the pathogenesis of the disease by inducing factors that promote proliferation, invasiveness, angiogenesis, and resistance to chemotherapeutic agents and radiation. Researchers have hypothesized that inhibition of NF-κB activation or transcriptional activity may delay cancer onset or may be used as an adjunct to more traditional chemotherapeutics. Many compounds, including many phytochemicals and micronutrients having putative chemopreventive properties, inhibit NF-κB activation or constitutive NF-κB activity in cellular or in vivo models of cancer.2,5,7,24 The anticancer activities of some of these phytochemicals are summarized in the table on page 16.

Many of the inducers of NF-κB also regulate other intracellular pathways that mediate cell cycle arrest or apoptosis. One hypothesis holds that inhibition of prosurvival pathways mediated via NF-κB allows expression of proapoptotic mechanisms that may also be mediated by the various cell signaling pathways. For example, TNF-α is an inflammatory cytokine that mediates a broad spectrum of biological actions via activation of the TNFR1 receptor and, depending on the cellular environment, can promote either cell survival or programmed cell death. On the one hand, TNF-α/TNFR1-induced activation of TRAF2 initiates kinase cascades that lead to phosphorylation and activation of AP-1 and NF-κB, thereby promoting gene expression, cell survival and proliferation. Conversely, through its interactions with TRADD or FADD, TNF-α/ TNFR1 initiates signaling pathways that activate caspase 8 and the proteolytic cascade that ends in apoptotic cell death. Furthermore, some of the genes induced by NF-κB activation, such as Gadd45β and XIAP, are inhibitors of prolonged JNK activation. JNK activation facilitates mitogen-induced and oxidative stress-induced apoptosis. Thus, in the presence of NF-κB inhibitors, TNFR1 activation would favor the proapoptotic, anticancer actions of TNF-α.2,13,25

It should be noted that many phosphorylation pathways, e.g., PI3K-Akt, JNK, and ERK, are involved in both prosurvival and proapoptotic cellular processes. Therefore, the physiological response to procarcinogenic and anticarcinogenic xenobiotics represents the sum of all the specific intracellular signaling pathways that are upregulated and down-regulated in response to these stimuli. While chemopreventive natural products may tip the balance toward cell death in some damaged or transformed cells, their actions may promote carcinogenesis or drug resistance in other cells or organisms.