Glycosyltransferases are specific for the type of linkage (α or β), and the linkage position of the glycoside bond formed [e.g. α(1→3) or β(1→4)]. Glycosyltransferases were initially considered to be specific for a single glycosyl donor and acceptor, which led to the “one enzyme-one linkage” concept.1,2 Subsequent observations have refuted the theory of absolute enzymatic specificity by describing the transfer of analogs of some nucleoside mono- or diphosphate sugar donors.3‑8

Glycosyltransferases can tolerate modifications to the acceptor sugar, as long as the acceptor meets specific structural requirements, e.g., appropriate stereochemistry and availability of the reactive hydroxyl group involved in the glycosidic bond.

In contrast to organic chemical synthesis, enzymatic glycosylation has potential for application use within biological systems, where the modification of glycosylation sites may be used to investigate the regulation of cell signaling processes. Various application strategies for glycosyltransferases have employed an assortment of glycosyl donors and reaction conditions for the synthesis of carbohydrates and the glycosylation of natural products.9,10

A major limitation to enzyme-catalyzed glycosylation reactions is the glycosyltransferase inhibition caused by nucleotide diphosphates generated during the reaction. Two strategies have been identified to prevent enzymatic inhibition (Figure 1): 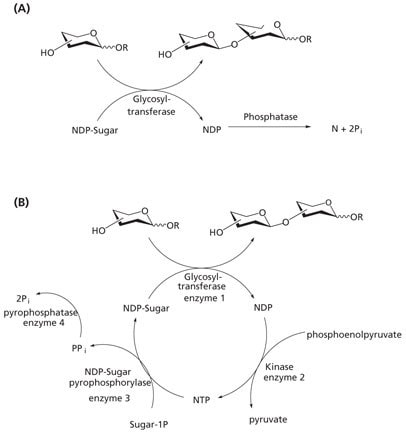 Several recently published syntheses of new drug-sugar conjugates derived from the broad range of naturally occurring glycosides underscore the potential of using glycosylated pharmaceuticals in drug delivery, where the sugar moiety may increase the solubility and bioavailability of large hydrophobic molecules under mild conditions.15-19

As part of our commitment to biotransformation technologies, we have developed recombinant glycosyltransferases and kits for preparative carbohydrate synthesis and directed modification of carbohydrate moieties. The enzymatic synthesis reactions go to completion rapidly and specifically, eliminating the need to isolate the desired glycan from closely related by-products. Our glycosyltransferase kits contain the enzyme, the appropriate nucleotide sugar donor, and all other components required for the transfer of a specific monosaccharide moiety to an acceptor substrate on a small preparative scale. Our glycosylation kits include alkaline phosphatase to degrade nucleotide diphosphate and prevent the inhibition of glycosyl transferase activity.

Each kit is sufficient for 5 glycosylation reactions.