There is no enzyme comparable to PNGase F for removing intact O-linked sugars. Monosaccharides must be sequentially hydrolyzed by a series of exoglycosidases until only the Gal-b(1-3)-GalNAc core remains. O-Glycosidase6 can then remove the core structure intact with no modification of the serine or threonine residue. Denaturation of the glycoprotein does not appear to significantly enhance O-deglycosylation. Any modification of the core structure can block the action of O-Glycosidase. The most common modification of the core Gal-b(1-3)-GalNAc is a mono, di, or trisialylation.7,8,9,10 These residues are easily removed by a2-(3,6,8.9)-Neuraminidase11 since only this enzyme is capable of efficient cleavage of the NeuAc-a(2-8)-NeuNAc bond. Another commonly occuring O-linked hexasaccharide structure contains b(1-4)-linked galactose and b(1-6)-linked N-acetylglucosamine as well as sialic acid.12,13b(1-4)-specific galactosidaseN-Acetylglucosaminidase. A non-specific galactosidase will hydrolyze b(1-3)-galactose from the core glycan and leave O-linked GalNAc that can not be removed by O-Glycosidase. b(1-4)-Galactosidase and β-N-Acetylglucosaminidase can be used for the hydrolysis of these and any other O-linked structures containing b(1-4)-linked galactose or b-linked N-acetylglucosamine such as polylactosamine. Less common modifications that have been found on O-linked oligosaccharides include a-linked galactose and a-linked fucose.13,14 Directly O-linked N-acetylglucosamine (found on nuclear proteins)15 and a-linked N-acetylgalactosamine (found in mucins) have also been reported. Additional exoglycosidases are necessary for complete O-deglycosylation when these residues are present. Fucose16 and mannose17 directly O-linked to proteins can not presently be removed enzymatically. Hydrolysis of this glycan will require, in addition to neuraminidase, a and an 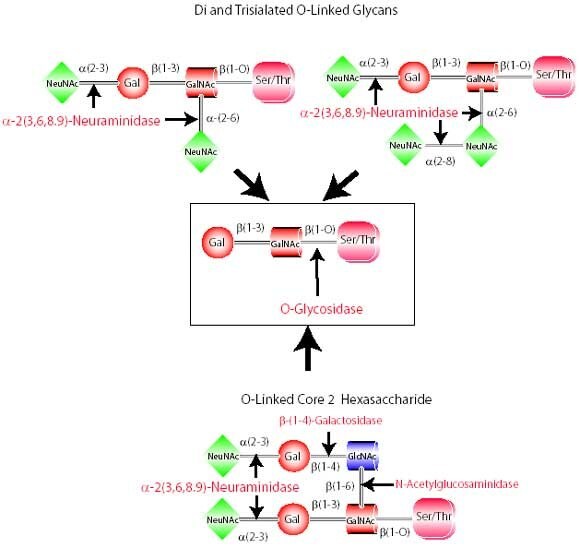 PNGase F is available as a solution and a lyophilized powder. PNGase F cleaves all asparagine-linked complex, hybrid, or high mannose oligosaccharides unless a(1-3) core fucosylated. The asparagine must be peptide bonded at both termini. The asparagine residue from which the glycan is removed is deaminated to aspartic acid. 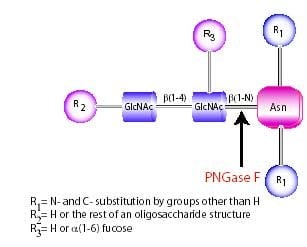 Peptide-N-Glycosidase A hydrolyzes oligosaccharides containing a fucose a(1-3)-linked to the asparagine-linked N-acetylglucosamine, commonly found in glycoproteins from plants or parasitic worms. These types of glycans are resistant to PNGase F. Like PNGase F the asparagine asparagine residue from which the glycan is removed is deaminated to aspartic acid. However, it is ineffective when sialic acid is present on the N-linked oligosaccharide. 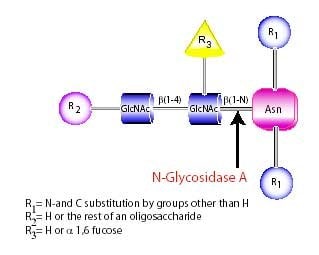 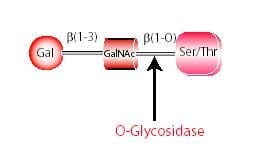 Endoglycosidase F1 cleaves between the two N-acetylglucosamine residues in the N-linked diacetylchitobiose glycan core of the oligosaccharide, generating a truncated sugar molecule with one N-acetylglucosamine residue remaining on the asparagine. High mannose (oligomannose) and hybrid structures can be removed by Endoglycosidase F1, but not complex oligosaccharides. Useful under native or non-denaturing deglycosylation conditions. 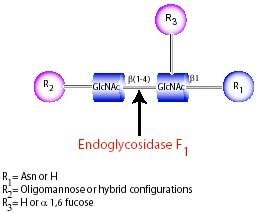 Endoglycosidase F2 cleaves between the two N-acetylglucosamine residues in the N-linked diacetylchitobiose glycan core of the oligosaccharide, generating a truncated sugar molecule with one N-acetylglucosamine residue remaining on the asparagine. Endo F2 cleaves biantennary complex and to a lesser extent high mannose oligosaccharides. Fucosylation has little effect on Endo F2 cleavage of biantennary structures. Endo F2 will not cleave hybrid structures. Useful under native or non-denaturing deglycosylation conditions. 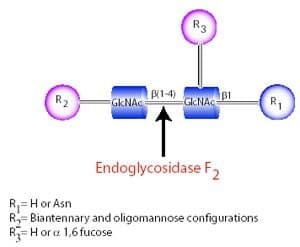 Endoglycosidase F3 cleaves between the two N-acetylglucosamine residues in the N-linked diacetylchitobiose glycan core of the oligosaccharide, generating a truncated sugar molecule with one N-acetylglucosamine residue remaining on the asparagine. Endo F3 cleaves non-fucosylated biantennary and triantennary structures at a slow rate but only if peptide-linked. Core fucosylation of biantennary structures increases activity up to 400-fold. Endo F3 has no activity on oligomannose and hybrid molecules. Endo F3 will also cleave fucosylated trimannosyl core structures on free and protein-linked oligosaccharides. Native deglycosylation of complex tetrantennary glycans requires sequential hydrolysis down to the trimannosyldiacetylchitobiose core. 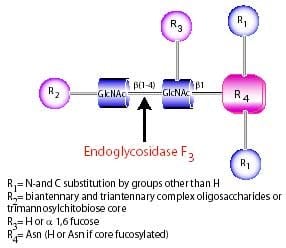 Endoglycosidase H is available as a native lyophilized powder, recombinant solution, or a recombinant solution with reaction buffer. Endo H cleaves between the N-acetylglucosamine residues of the diacetylchitobiose core of N-linked glycans. Oligomannose and most hybrid type glycans, including core fucosylated are hydrolyzed by Endo H. However complex type oligosaccharides are not. 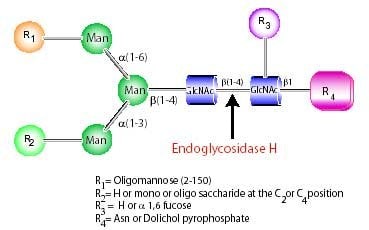 E-DEGLY Kit for General Enzymatic Deglycosylation
Deglycosylation of most N- and O-linked glycoproteins can be accomplished with our E-DEGLY Kit. This kit contains the enzymes and reagents required for sequential and intact hydrolysis of glycan components under denaturing and some non-denaturing conditions.

PP0200 ProteoProfile Enzymatic In-Gel N-Deglycosylation Kit
This kit has been optimized to provide a convenient and reproducible method to N-deglycosylate and trypsin-digest protein samples from 1D or 2D polyacrylamide gel pieces for subsequent MS or HPLC analysis.