HomeProtein Labeling & ModificationGlycosyltransferases: Tools for Synthesis and Modification of Glycans

Glycosyltransferases: Tools for Synthesis and Modification of Glycans

The presence of multiple functional groups and stereocenters in complex carbohydrates makes them challenging targets for the organic chemist. Chemical synthesis research has not yielded robust, automated protocols comparable to those developed for the preparation of peptides and oligonucleotides. There are two major obstacles to the large-scale, chemical synthesis of carbohydrates and glycoconjugates: 1-5

Glycosyltransferases from the Leloir pathway 6-8 have been proven to be viable alternatives to chemical synthesis in the preparation of oligosaccharides. 1,2,9-13 As more of these transferases are isolated from natural sources or produced by recombinant technology, chemists have recognized enzymatic glycosylation as the preferred method to complement classical synthetic techniques. Leloir glycosyltransferases are highly regioselective and stereospecific with respect to the glycosidic linkages formed. They incorporate unprotected sugar precursors, avoid tedious chemical modifications, and provide oligosaccharides in high yields.

The biosynthesis of oligosaccharides, catalyzed by glycosyltransferases from the Leloir pathway, resembles the corresponding chemical procedure (Figure 1). A donor sugar is activated in the first step, followed by the transfer of the activated sugar to an appropriate acceptor sugar. Leloir glycosyltransferases primarily utilize one of eight different nucleotide mono- or diphosphates (UDP-Glc, UDP-GlcNAc, UDP-Gal, UDP-GalNAc, GDP-Man, GDPFuc, UDP-GlcA, and CMP-NeuAc) as monosaccharide donors to build a new glycosidic bond. 7 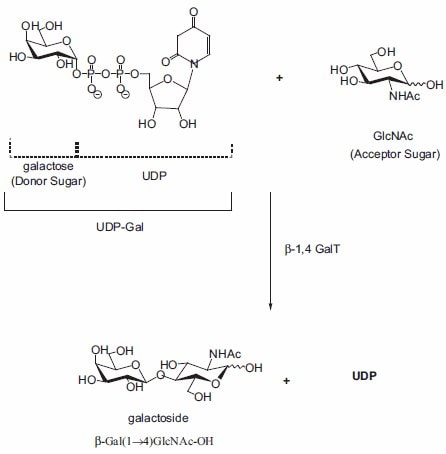 Glycosyltransferases are specific for the type of linkage (α or β), and the linkage position of the glycoside bond formed [e.g. α(1→3) or β(1→4)]. Glycosyltransferases were initially considered to be specific for a single glycosyl donor and acceptor, which led to the “one enzyme–one linkage” concept. 28,29 Subsequent observations have refuted the theory of absolute enzymatic specificity by describing the transfer of analogs of some nucleoside mono- or diphosphate sugar donors. 30-36 Glycosyltransferases can tolerate modifications to the acceptor sugar, as long as the acceptor meets specific structural requirements (e.g. appropriate stereochemistry and availability of the reactive hydroxyl group involved in the glycosidic bond).

A major limitation to enzyme-catalyzed glycosylation reactions is the glycosyltransferase inhibition caused by nucleoside diphosphates generated during the reaction. Two strategies have been identified to prevent enzymatic inhibition (Figure 2):

1. Phosphatase is added to the reaction to degrade the nucleoside diphosphates by removal of the phosphate group (Figure 2A).23 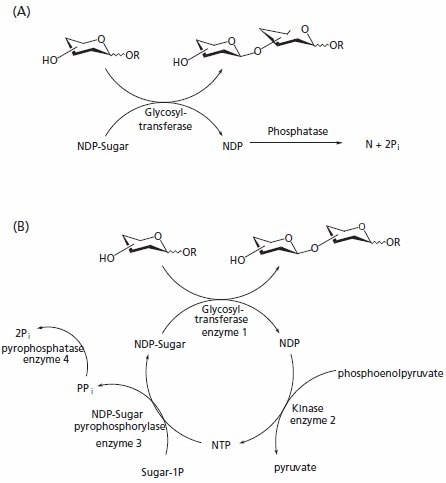 In contrast to organic chemical synthesis, enzymatic glycosylation has potential for application use within biological systems, where the modification of glycosylation sites may be used to investigate the regulation of cell signalling processes. Various application strategies for glycosyltransferases have employed an assortment of glycosyl donors and reaction conditions for the synthesis of carbohydrates and the glycosylation of natural products.27,28

α(1→3)Galactosyltransferase transfers a galactose unit from the activated donor UDP-galactose (UDP-Gal) to the 3-hydroxy site of a terminal β-linked galactose, resulting in an α-linkage. Several studies of α(1→3)galactosyl transferase substrate specificity have been carried out which show a high acceptor promiscuity of the enzyme in vitro.38-40 Acceptors that have been successfully used include lactose, β-lactosyl azide, β-thiophenyl lactoside, N-acetyllactosamine derivatives, lactosamine,41 and a wide range of N-acylderivatives of type II disaccharides. Carbamate groups, protected amino acid residues, lipophilic, and hydrophilic aromatic residues can replace the natural occurring N-acetyl group.6 α(1→3)Galactosyl transferase can transfer galactose to an unnatural hindered tertiary hydroxyl group of the acceptor sugar, yielding an acetal formation reaction with a highly deactivated hydroxyl group that is extremely difficult to synthesize by chemical methods.42

The synthesis and substrate specificity of β(1→4)Galactosyltransferase (EC 2.4.1.22; β(1→4)GalT) from bovine milk has been extensively investigated.2,9-12,43-49 β(1→4)GalT catalyzes the transfer of galactose from UDP-galactose (UDP-Gal) to the 4-hydroxy site of N-acetyl-D-glucosamine (GlcNAc) and β-linked GlcNAc subunits to yield β-lactosamine (β-LacNAc) and β-Gal(1→4)-β-GlcNAc structures respectively.50 Both α- and β-glycosides of glucose have been used as acceptors by β(1→4)GalT, with α-glucosides requiring the presence of α-lactalbumin.26 The enzyme forms a heterodimeric complex with α-lactalbumin, altering the specificity so that D-glucose becomes the preferred acceptor. Thus, addition of α-lactalbumin promotes the formation of lactose (β-Gal(1→4)- Glc-OH). Numerous other acceptor substrates for the β(1→4)GalTcatalyzed transfer of galactose have been described, including 2-deoxy glucose, D-xylose, 5-thioglucose, N-acetylmuramic acid, and myo-inositol. 6-O-Fucosylated and sialyated modifications may also serve as acceptors,51 as well as 3-O-methyl-GlcNAc,24 3-deoxy- GlcNAc, 3-O-allyl-GlcNAc-β-OBu and 3-oxo-GlcNAc.66 Several modifications of GlcNAc that have been employed as acceptor substrates are illustrated (Figure 3).9 Figure 3. Modifications of GlcNAc employed as acceptors in β(1→4)GalT catalyzed transfer of galactose.

β(1→4)GalT cannot utilize D-mannose, D-allose, D-galactose, or D-ribose as substrates.11-12 Monosaccharides displaying a negative charge, such as glucuronic acid and α-glucose 1-phosphate, are also not tolerated as substrates. Azasugars and glucals have been shown to be very weak acceptors.24 Modified nucleotide sugar donor substrates have a slower rate of enzyme-catalyzed transfer.11,12

N-Acetylglucosaminyl amino acids and peptides have been successfully galactosylated to produce glycopeptides with a disaccharide moiety. Subsequent extension of the carbohydrate chain was accomplished by employing α(2→6)sialyltransferase.53-54

Since different glycosides of N-acetylglucosamine and glucose can be used as acceptors in β(1→4)GalT-catalyzed galactose transfer, the enzymatic method has been used to modify pharmacologically interesting glycosides.56-59 β(1→4)GalT has been used to attach galactose to the bioactive glycosides elymoclavine-17-O-β-Dglucopyranoside, 56 stevioside and steviolbioside,60 colchicoside and fraxin,61 and different ginsenosides.62 Conjugation of galactose with glycosides demonstrates the potential application in drug delivery by increasing the solubility and bioavailability of large hydrophobic molecules under mild conditions. C-Glycoside analogs of the naturally occurring glycopeptide linkages (N-acetylglucosamine β-linked to either asparagine or serine) generated high yields of the corresponding C-lactosides.63

β(1→4)GalT has been employed in solid-phase oligosaccharide synthesis on polymer supports such as polyacrylamide or water-soluble poly(vinyl alcohol). The resulting galactosylated oligosaccharides are cleaved from the polymers photochemically or with chymotrypsin.64

Figure 4. Minimum structural requirements for an acceptor employed in α(1→3)FucT catalyzed transfer of L-fucose include: 6’-OH, free 3-OH, β(1→4)-linkage and 2-NH-acylation. An acyl lactosamine is shown as an example acceptor.

The number and linkage type of fucose residues in N-glycans and the fucosylation pattern varies with the organism, the tissue, and the developmental and physiological status of the cell. 68 Fucose is normally attached:

The terminal step in the biosynthetic pathway of fucosecontaining saccharides is the transfer of L-fucose from GDPFuc to the corresponding glycoconjugate acceptor catalyzed by fucosyltransferase. 67-71 Fucosylated glycan structures within glycopeptides, glycoproteins and glycolipids play a central role in cell-cell interactions and cell migration, increasing the significance of the study of fucosyltransferase expression, inhibition and regulation. More than 150 complete or partial sequences of fucosyltransferases can be found through protein sequence databases such as Swiss Institute of Bioinformatics Swiss-Prot system www.expasy.ch.

As part of our commitment to biotransformation technologies, we have developed recombinant glycosyltransferases and kits for preparative carbohydrate synthesis and directed modification of carbohydrate moieties. The enzymatic synthesis reactions go to completion rapidly and specifically, eliminating the need to isolate the desired glycan from closely related by-products.

Our glycosyltransferase kits contain the enzyme, the appropriate nucleotide sugar donor, and all other components required for the transfer of a specific mono saccharide moiety to an acceptor substrate on a small preparative scale. Our glycosylation kits include alkaline phosphatase to degrade nucleotide diphosphate and prevent the inhibition of glycosyl transferase activity.