The earth's gravitational force is sufficient to separate many types of particles over time. A tube of anticoagulated whole blood left standing on a bench top will eventually separate into plasma, red blood cells, and white blood cell fractions. However, the length of time required precludes this manner of separation for most applications.

In practice, centrifugal force is necessary to separate most particles. In addition, the potential degradation of biological compounds during prolonged storage means faster separation techniques are needed.

The rate of separation in a suspension of particles by way of gravitational force mainly depends on the particle size and density. Particles of higher density or larger size typically travel at a faster rate and at some point will be separated from particles less dense or smaller. This sedimentation of particles, including cells, can be explained by Stoke's law, which describes the movement of a sphere in a gravitational field.1 The equation calculates the velocity of sedimentation utilizing five parameters (Figure 1). 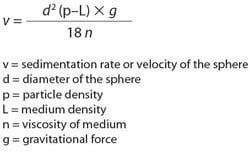 From the Stokes equation five important behaviors of particles can be explained:

Most particles are so small that gravitational force is insufficient to overcome the random molecular forces of particles to influence separation. Centrifugation, the name given to separation applications which involve spinning around an axis to produce a centrifugal force, is a way to increase the magnitude of the gravitational field. The particles in suspension experience a radial centrifugal force moving them away from the axis of rotation.2

The radial force generated by the spinning rotor is expressed relative to the earth's gravitational force and therefore is known as the relative centrifugal force (RCF) or the "g force." The g force acting on particles is exponential to the speed of rotation (defined as revolutions per minute; rpm).

Table 1Classes of centrifuges and their applications

* Can be done but not usually used for this purpose.

A nomogram can also be used to obtain the speed of a centrifuge rotor necessary for a desired RCF (Figure 3). This quick estimate is useful for low speed centrifugation applications. However, it is more accurate to use the RCF calculation for speeds in excess of 10,000 rpm. 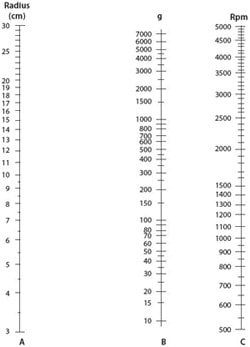 A number of different compounds have been investigated as density gradient media. One of the first density gradient centrifugation techniques was developed in the 1950s and used a buffered sucrose solution for the purification of cell organelles. Sucrose quickly became the density medium of choice for separating homogenized mammalian tissues. Later, cesium chloride gradients were used to separate DNA of different densities. Meselson and Stahl in 1958 used cesium chloride density gradient centrifugation in an elegant experiment to support the semi-conservative model of DNA replication. Colloidal-silica suspensions were first manufactured by DuPont and sold under the name of LUDOX®.4

In 1977, the stabilized silica colloid coated with polyvinylpyrrolidone (PVP) called Percoll® became available for separating cells and subcellular particles. In 1968, Boyum described methods for the isolation of mononuclear cells from circulating blood and bone marrow using mixtures of polysaccharide and a radiopaque contrast medium. This led to the development of the first nonionic iodinated density gradient medium, metrizamide, in the 1970s.5 Now, a large selection of commercial iodinated density gradient media are available.