Ever since the first publication describing Western blotting (Renart et al., 1979), this immunodetection technique has been widely utilized to identify specific proteins in complex mixtures extracted from cells or tissues. Western blotting has three basic elements:1 separation of proteins by their size,2 transfer to a solid support, and3 marking target proteins using an appropriate primary antibody followed by visualization, typically with a conjugated secondary antibody. Subsequent refinements in tools and techniques—along with the development of highly sensitive fluorescent labels—have meaningfully enhanced the limits of detection, and have allowed scientists to probe tissue-specific normal and disease pathways. However, scientists usually face some difficulties when using quantitative Western blotting to identify changes in protein levels. This is due to the fact that many proteins exhibit varying expression patterns in different tissues and under different physiological and pathological conditions.

Western blotting: a routine technique that is not simple

Although Western blotting is likely the most commonly used immunoapplication, there are still a few critical technical concerns that may be chronically overlooked. For example, do isolation or separation protocols affect the integrity of the protein or its post-translational modification? Can one differentiate between degradations or aggregations of protein and the relevant products of biological processes? When the result is multiple bands, how can one determine which are result, variation, artifact? (Gorr and Vogel, 2015)

Quantitative Western blot may be used to compare relative amounts of a target protein amongst a group of samples which may represent different individuals, treatment conditions, disease states, or other biological variables. To accurately identify and measure total protein levels across multiple samples, scientists may use “loading controls” as internal standards. This control refers to the addition of a primary antibody against a protein presumed to be present in all samples and whose relative abundance is unaffected by biological variations or experimental conditions. Protein targets that are typically good candidates for loading controls are ubiquitously expressed “housekeeping” gene products. The use of loading controls permits quantitation of sample loading across all wells in order to normalize results, under the assumption that the loading control is identical between different sample lanes. The use of loading controls also guards against the “edge effect,” a condition commonly seen when large numbers of lanes are used, and proteins in the outer lanes transfer to the membrane in a position closer to the frame, causing more intense staining at the edge of the blot. Loading controls can be used to show whether protein loading variation has occurred and may account for observed variations in the target band(s). When used correctly, loading controls ensure that proteins are quantitated appropriately despite subtle differences in loading amounts across all lanes of the Western blot. 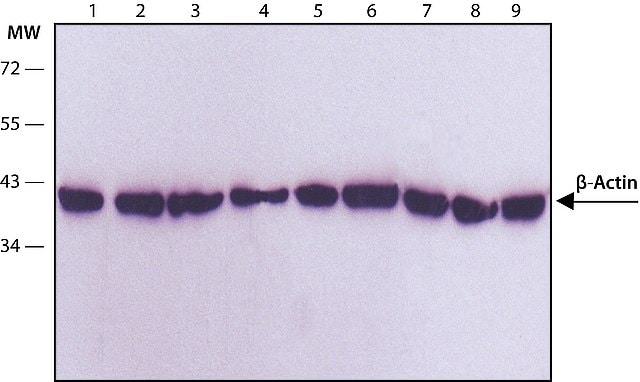 Western blot validation of a monoclonal antibody against β-actin (A5316). Constitutively-expressed proteins like β-actin, β-tubulin, GAPDH and others are often chosen as loading controls for quantitative Western blotting. The use of loading controls helps to ensure that apparent variations in target protein abundance are due to relevant biological variation, and not to inconsistencies in the amount of total protein loaded to the gel. The table below lists other sample- and condition-specific antibodies that are useful as WB loading controls.

Beta-actin and beta-tubulin have been consistently employed as loading controls, because their expression is relatively constitutive in most model systems. However, some publications have questioned the validity of using β-actin as a standard loading control (Ditmar and Ditmar, 2006; Eaton et al., 2013; Li and Shen, 2013) on the grounds that β-actin and β-tubulin levels differ amongst tissues, and their expression can be affected by pathological conditions. These publication authors suggest a total protein analysis as an alternative technique in quantitative Western blotting, and recommend that “housekeeping” gene products should be used with care after studying the expression pattern of the gene under investigation. Nonetheless, β-actin and β-tubulin offer certain advantages as loading controls: they are highly conserved, display high expression level, and exhibit stability under most experimental conditions. It is important to note that one must select a control based on the specific tissue or cell type being studied, and empirical testing may be required to verify the uniformity of the loading control.

Tips for getting effective results from loading control antibodies

To overcome variability in Western blotting and reduce errors in data interpretation, some of the following precautions may be helpful.

Titrate antibody concentration and blot exposure time of loading control with sample to be used before beginning to ensure that loading control signal is within the linear range of detection.