Western Blotting: Why Are Observed and Calculated Molecular Weights Different? 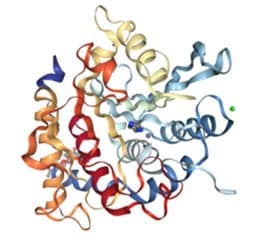 Western blotting is a widely used laboratory method to detect specific protein molecules in a tissue homogenate or cell lysate. Typically, it involves separating proteins by SDS-polyacrylamide gel electrophoresis (SDS-PAGE), transfer to a solid support [polyvinylidene difluoride (PVDF) or nitrocellulose membrane], and detecting the protein of interest using antibodies. The size of the protein can be determined through separation by electrophoresis - smaller proteins migrate faster than their larger counterparts. Protein size is then estimated from molecular weight standards, and is termed the "observed molecular weight".

In SDS-PAGE the intrinsic charge of proteins is essentially negligible when compared to the negative charge of sodium dodecyl sulfate (SDS). Upon application of a constant electric field, proteins (which are coated with the negatively-charged SDS) migrate towards the anode. The smaller molecules migrate faster than larger molecules that are restrained by the polyacrylamide gel. However, in the rare circumstance a protein has large number of arginine or lysine residues, it remains positively-charged. This could affect SDS binding and influence migration of the protein in a gel, creating a discrepancy between observed and calculated molecular weight.

Ubiquitin is a small protein (76 amino acids with a molecular weight of 8.6 kDa) that is expressed across almost all tissue types. It covalently binds to lysine, cysteine, serine, threonine, or directly to the protein N-terminus through an enzymatic reaction catalyzed by a three-enzyme cascade (E1, E2, and E3). Proteins may be mono-ubiquitinated or poly-ubiquitinated. This contributes to the observed molecular weight of the protein.

In SDS-PAGE, electrophoresis is performed under denaturing conditions. Most protein complexes that are composed of proteins linked via non-covalent bonds disassociate during sample preparation and electrophoresis, and component proteins run as monomers. However, some complexes may not be completely disrupted, and some proteins may remain in homo- or heteromeric complexes, even in the presence of SDS and β-mercaptoethanol. In these cases, the observed molecular weight can be substantially higher than the predicted monomeric weight. Some proteins, especially transmembrane proteins and proteins with hydrophobic domains, can also aggregate during cell lysis as they are released from their native protein complexes and lipid membranes. These aggregates display higher molecular weights and may not represent interactions that occur in their native states.

Disruption of cell membranes during tissue homogenization or cell lysis releases proteases that can degrade proteins of interest. Proteins can undergo non-specific proteolytic digestion if the protein sample is not handled correctly. Proteases released during cell lysis or tissue extraction can cause protein fragmentation, resulting in smaller fragments of lower molecular weights. Some proteins are more susceptible to degradation than others. Hence, the choice of cell/tissue lysis buffers, lysis conditions, and use of any protease inhibitors can impact results. Addition of protease inhibitors that block the activity of a various proteases must be added either individually or as a ready-to-use cocktail to reduce or eliminate protein degradation.

Many proteins encoded by a single gene, exist in more than one sequence variant, or protein isoform, due to alternative splicing during mRNA maturation. This can result in additional protein-coding sequences and higher molecular weight protein products, or proteins of lower molecular weight owing to premature stop codons. In addition, some proteins may have multiple translation start sites, which give rise to isoforms with different N-termini. Protein isoforms can have differing half-life and subcellular localization and may interact with diverse subsets of proteins or form distinctive protein complexes. They may also have altered functions.

Many proteins that synthesized with a signal peptide, pro-peptide, or both. The signal peptide and pro-peptide are subsequently cleaved by specific proteases to generate the mature protein. This can lead to a discrepancy between expected and observed molecular weight.

There are many factors that can account for differences between observed and calculated protein molecular weight in gel electrophoresis and western blotting. Shifts can occur due to intrinsic net charge, post-translational modifications, aggregation, degradation, the existence of multiple protein variants, and precursor processing. An understanding of these factors can assist in troubleshooting, as well as provide further information on protein structure and function.