The Comet Assay, also called single cell gel electrophoresis (SCGE), is a sensitive and rapid technique for quantifying and analyzing DNA damage in individual cells. As such, this is one of the techniques used in the area of cancer research for the evaluation of genotoxicity and effectiveness of chemoprevention. Swedish researchers Östling & Johansson developed this technique in 1984.1 Singh, et al., later modified this technique, in 1988, as the Alkaline Comet Assay.2 The resulting image that is obtained resembles a "comet" with a distinct head and tail. The head is composed of intact DNA, while the tail consists of damaged (single-strand or double-strand breaks) or broken pieces of DNA. While most of the applications of the Comet Assay have been to study animal eukaryotes, there have been reports of successful application in the study of plant cells.

Individual cells are embedded in a thin agarose gel on a microscope slide. All cellular proteins are then removed from the cells by lysing. The DNA is allowed to unwind under alkaline/neutral conditions. Following the unwinding, the DNA undergoes electrophoresis, allowing the broken DNA fragments or damaged DNA to migrate away from the nucleus. After staining with a DNA-specific fluorescent dye such as ethidium bromide or propidium iodide, the gel is read for amount of fluorescence in head and tail and length of tail. The extent of DNA liberated from the head of the comet is directly proportional to the amount of DNA damage. 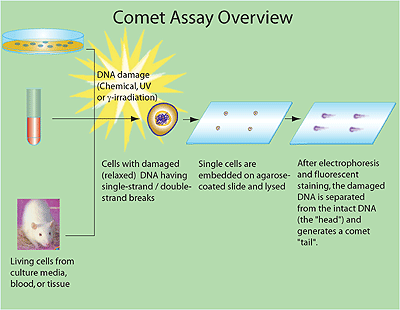 The Comet Assay Interest Group website includes references and protocols for the Comet Assay and maintains a list of companies that sell software for comet assay image analysis.4

Suggested our products for use with the Comet Assay Protocol