Proliferatively active cells require fatty acids for functions such as membrane generation, protein modification, and bioenergetic requirements. These fatty acids are derived either from dietary sources or are synthesized by the cell. While most non-transformed cells rely on dietary-derived fatty acids to meet their biosynthetic and bioenergetic needs, many cancer cells exhibit a lipogenic phenotype with the upregulation of many of the proteins involved in de novo fatty acid synthesis. In particular, overexpression of the multi-enzyme complex fatty acid synthase (FASN) is common to many tumor cells and is often associated with poor prognosis.1 In addition to increased FASN activity, oncogenic progression is often associated with the increased activity and expression of many enzymes involved in fatty acid synthesis such as acetyl-CoA carboxylase (ACC) and ATP citrate lyase (ACL).1,2

Fatty acid synthesis requires acetyl-CoA generated from citrate produced by the TCA cycle or from cytoplasmic α-ketoglutarate. Excess pyruvate generated by enhanced glycolysis is converted to acetyl-CoA in the mitochondria through the activity of pyruvate dehydrogenase and shuttled to the cytoplasm as citrate via the citrate shuttle.1 Glutamine metabolism can produce citrate either through the TCA cycle or by the reductive carboxylation of cytoplasmic α-ketoglutarate to citrate by isocitrate dehydrogenase-1 (IDH1). The latter pathway is favored by cells with defects in mitochondrial oxidation, cells growing in hypoxic conditions, or those exhibiting pseudohypoxia due to activated HIF signaling.3,4 Citrate is converted back to acetyl-CoA and oxaloacetate in a reaction catalyzed by ACL. Cytoplasmic acetyl-CoA is then carboxylated to malonyl-CoA through ACC, the rate-limiting step for long-chain fatty acid synthesis. Malonlyl-CoA and acetyl- CoA are converted to palmitate by FASN.1,2

Oncogenic signaling contributes both directly and indirectly to the upregulation of fatty acid synthesis pathways. The increased expression and activity of ACL, ACC, and FASN in multiple cancer types suggests this pathway may contribute to increased survival and proliferation of tumor cells. Both PI3K/Akt and MAPK signaling contributes to the increased expression of FASN and other lipogenic proteins, and ACL is a direct target of Akt phosphorylation.1 Inhibition of ACL activity in glycolytically-active tumor cells resulted in their decreased proliferation and survival.5 Similarly, the RNAi-mediated knockdown of ACC resulted in decreased proliferation and survival of certain tumor cells.1,6 Accumulating evidence suggests that FASN, in addition to its role in fatty acid synthesis, is a metabolic oncogene. Ectopic expression of FASN in non-transformed prostrate cells protected the cells from apoptosis, and the injection of transgenic FASN-expressing prostrate cells in a xenograft model resulted in increased neoplasia when compared to controls. Small molecule inhibitors of FASN, such as Cerulenin and C75, preferentially promote apoptosis of cancer cells compared to normal cells. In addition, many naturally occurring dietary compounds and polyphenols such as catechin, epigallocatechin, and luteolin are being investigated as potential fatty acid synthesis inhibitors.6 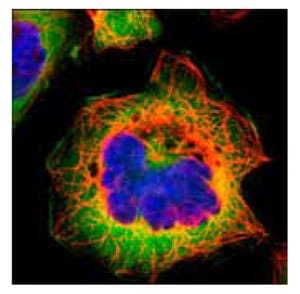 Anti-ACLY.Product No. HPA022959: Immunofluorescent staining of human cell line U-251MG shows positivity in nucleus but not nucleoli and cytoplasm.