Actin is an important component of many basic cellular structures and functions:

Although actin is one of the most conserved eukaryotic proteins, it is expressed as six isoforms characterized by electrophoresis and amino acid sequence analysis. Four of the six isoforms represent differentiation markers of muscle tissues. The other two are found in practically all cells. Actin isoforms show >90% overall sequence homology, but only 50–60% homology in their 18 NH2-terminal residues. The NH2-terminal region of actin appears to be a major antigenic region, and may be involved in the interaction of actin with other proteins such as myosin. It has been shown that the relative proportion of actin isoforms are different in smooth muscles of different organs and change within the same population of smooth muscle cells during development, pathological situations and different culture conditions. The actin in cells of various species and tissue origin are very similar in their immunological and physical properties.

Actin is a eukaryotic 43 KDa globular protein in its monmeric form (G-actin). 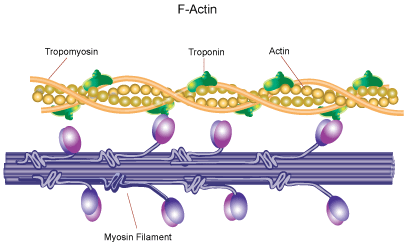